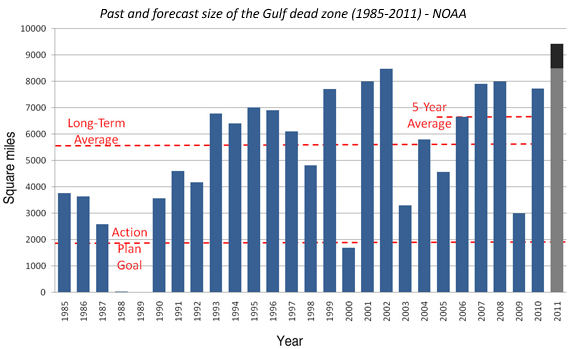 Flooding in the Midwest is likely to cause the largest-ever dead zone in the Gulf of Mexico, reports the National Oceanic and Atmospheric Administration (NOAA).

NOAA-supported scientists from three universities — the Louisiana Universities Marine Consortium, Louisiana State University and the University of Michigan — predict the area of low oxygen in the Gulf will measure between 8,500 and 9,421 square miles, an area roughly the size of New Hampshire. The largest Gulf dead zone ever measured since record-keeping began in 1985 occurred in 2002 and encompassed more than 8,400 square miles. The average Gulf dead zone over the past five years. is 6,000 square miles.

Scientists believe this year’s hypoxic zone will be especially large due to agricultural run-off from flooded farmlands.

“Hypoxia is caused by excessive nutrient pollution, often from human activities such as agriculture that results in too little oxygen to support most marine life in bottom and near-bottom water,” says NOAA.

Nutrient pollution in the Mississippi has been exacerbated by subsidies to boost corn ethanol production. Earlier this week the Senate voted to end support of corn ethanol, which has cost U.S. taxpayers $30 billion since 1980.