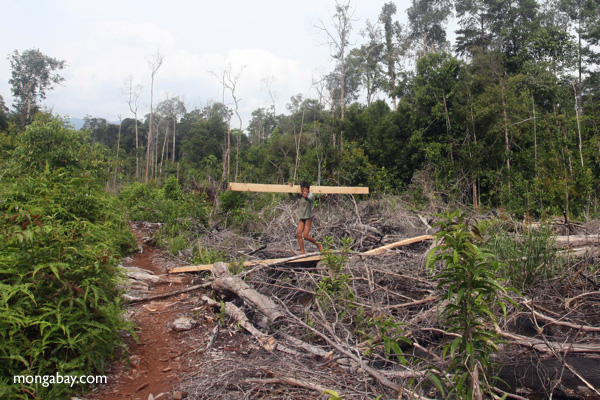 The EU and Indonesia today signed an agreement in Jakarta that aims to keep illegally logged wood from reaching the European market. This is the first Voluntary Partnership Agreement (VPA) signed by an Asian nation with the EU and is seen as a considerable step forward on the fight against the illegal logging trade worldwide.

“[Indonesia is] by far the largest timber exporter to enter into such an agreement,” EU Trade Commissioner Karel de Gucht said in a press statement.

The VPA makes it so that wood shipped to the EU must first be approved as legal by a national authority, while EU customs workers are set to return any unapproved wood back to Indonesia. The VPA took four years to draft and agree on.

“A major challenge lies ahead in keeping [the trade] free from corruption and ensuring that the Government of Indonesia implements it properly and with robust transparency,” Faith Doherty, Team Leader Environmental Investigation Agency (EIA)’s Forest Campaign, said in a press release. Widespread corruption is seen as an Achilles’ heel to many of Indonesia’s efforts to fight deforestation.

Despite consensus on the agreement between the EU and Indonesian governments and widespread accolades from environmental organizations, World Growth International, a group that lobbies for big logging companies in Indonesia and Malaysia (including some that have been linked to illegal logging) has come out in opposition against the agreement, asserting that authorities shouldn’t try to bar illegally logged timber from markets. Dubbing the agreement ‘a poison’, the group claims that illegal logging makes up only 1% of the global trade.

But according to the European Forest Institute’s (EFI) press release on the agreement, 40% of timber exported from Indonesia is illegally logged, and until recently that percentage was far greater.

The forests of Indonesia are among the world’s most imperiled: from 1990 to 2005 Indonesia lost an estimated 28 million hectares of forest, an area greater than the state of Colorado in the U.S.

Logging, both legal and illegal, mining, and oil palm and pulp and paper plantations have contributed significantly to forest loss in Indonesia, endangering wildlife, undermining livelihoods of forest-dependent people, and contributing vast quantities of greenhouse gases into the atmosphere. Indonesia is third among the world’s top greenhouse gas emitters, behind industrial juggernauts the U.S. and China. But Indonesia has recently signaled an interest in reversing the trend. Last year it signed a billion dollar agreement with Norway to reduce forest loss and pledged to transition toward a more sustainable economy based on greener growth strategies.

Indonesia and the EU reach agreement on illegal wood trade

(04/17/2011) A new agreement will work to keep illegal wood from Indonesia out of European Union markets. The Voluntary Partnership Agreement (VPA) will force Indonesia to only ship wood to the EU that has been approved as legal by a national authority, while EU customs workers are set to send any unapproved wood back to Indonesia. The VPA is a step forward in tackling the illegal timber market in Indonesia that is estimated to be worth $1 billion and has been responsible, in part, for leveling rainforests across the Indonesia islands.