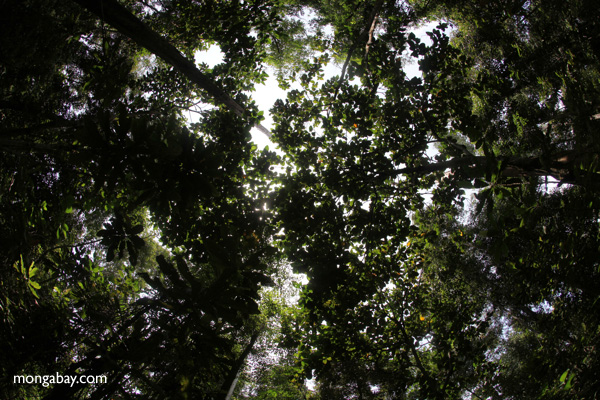 Deforestation and climate change will likely decimate much of the Amazon rainforest, says a new study by Brazil’s National Institute for Space Research (INPE) and the UK’s Met Office Hadley Centre.

Climate change and widespread deforestation is expected to cause warmer and drier conditions overall, reducing the resistance of the rainforest ecosystem to natural and human-caused stressors while increasing the frequency of extreme rainfall events and droughts by the end of this century. While climate models show that higher temperatures resulting from global climate change will threaten the resilience of the Amazon, current deforestation is an immediate concern to the rainforest ecosystem and is likely driving regional changes in climate. Augmented by both global and locally-driven climate change, forest degradation is likely to have serious consequences for the region’s inhabitants, the Amazon’s vast diversity of species, and the global carbon budget.

However, if widespread deforestation continues, the news is bleak. According to the study, if forty percent of the Amazon were to be deforested, the rainforest ecosystem would pass a ‘tipping point’ that would trigger a feedback loop between forest loss and climate impacts. Warming of three to four degrees Celsius in the Amazon region would likely engage a similar tipping point. Such a point may not be far off.

The sensitive hydraulic cycle of the Amazon could also be at risk if even 30 percent of the forest is cleared. The rainforest recycles up to half of its rainwater, and a positive feedback loop of forest loss and decreased rainfall would threaten the stability of Amazonian ecosystems. Additional warming from climate change would accelerate the process of ecosystem alteration and its warming, drying effects.

Stressors on the Amazon rainforest could impact the whole continent. The Amazon plays a crucial role in regulating the climate of South America through its influence on the regional water cycle; therefore, large-scale deforestation in the rainforest compounded by global climate change could decrease the forest’s ability to recycle rainfall and transport moisture to other parts of the continent.

By reducing the Amazon’s capacity to absorb carbon, modifying regional water cycles, and increasing soil temperatures, deforestation and climate change could cause the Amazon to die back and be replaced with savannah-like vegetation. Such ecosystem alterations could drive major economic distress in Brazil: more than 70 percent of Brazil’s energy is produced by hydropower, and reduced rainfall related to forest death would limit the electricity supply to industrial areas. Meanwhile, dry conditions would exacerbate wild fires, which would in turn send more carbon into the atmosphere.

Even more worrisome than changes in average temperature and rainfall is the increased likelihood and frequency of extreme weather events related to climate change and regional deforestation. The Amazon has experienced two droughts and record flooding within the last five years. The 2005 and 2010 droughts fit the analysis of some climate models that projected significant drying and warming of the Amazon by the end of the century. The INPE-Hadley Centre study estimates that drought years like 2005 are now a one in twenty year event, but they could be a one in two year event by 2025 and a nine in ten year event by 2060 given current trends of climate alteration. Droughts and floods are part of the natural climate variability of the Amazon, but the risk of severe weather is expected to increase with worsening climate change. The 2005 drought greatly reduced fish yields and had a negative impact on the transportation, agriculture, and hydropower sectors, while a 2009 flood displaced thousands and led to serious public health issues related to water-borne disease.

80% of rainforests could adversely impacted by logging, deforestation, climate change by 2100

(08/05/2010) The world’s tropical forests may suffer large-scale degradation and deforestation by the end of the century if current logging and climate change trends persist, finds a new analysis published in Conservation Letters.

(02/11/2009) Changes in rainfall resulting from climate change may drive the parts of Amazon rainforest toward seasonal forests rather than savanna, argue researchers writing in the Proceedings of the National Academy of Sciences

(01/23/2008) Cattle ranching, industrial soy farming, and logging are three of the leading drivers of deforestation in the Brazilian Amazon. As commodity prices continue to rise, driven by surging demand for biofuels and grain for meat production, the economic incentives for developing the Amazon increase. Already the largest exporter of beef and the second largest producer of soy – with the largest expanse of “undeveloped” but arable land of any country – Brazil is well on its way to rivaling the U.S. as the world’s agricultural superpower. The trend towards turning the Amazon into a giant breadbasket seems unstoppable. Nevertheless the decision at the U.N. climate talks in Bali to include “Reducing Emissions From Deforestation and Degradation” (REDD) in future climate treaty negotiations may preempt this fate, says Dr. Daniel Nepstad, a scientist at the Woods Hole Research Institute.

(12/06/2007) Deforestation and climate change could damage or destroy as much as 60 percent of the Amazon rainforest by 2030, according to a new report from environmental group WWF. The report, The Amazon’s Vicious Cycles: Drought and Fire in the Greenhouse, shows that degradation in the Amazon could release 55-97 million tons of carbon dioxide by 2030. Forest loss could also dramatically impact water cycles in the region, affecting rainfall that is critical for river flows and agriculture.