Dutch to use only certified palm oil by 2015

The Netherlands has committed to only using palm oil certified under the Roundtable on Sustainable Palm Oil (RSPO) by 2015, providing a huge boost for the certification standard which aims to improve the social and environmental performance of the world’s most productive oil crop. The pledge makes the Netherlands the first country to commit itself to using only sustainable palm oil.

“Dutch business has long been closely involved in efforts to make the palm oil supply chain more sustainable. The country has been one of the front runners in this respect,” said Frans Claassen, Director of the Dutch Product Board for Margarine, Fats and Oils (MVO). “Now, we commit ourselves to acting on our believes. Over the next few years, we will work very hard to ensure that all palm oil used in the Netherlands will be sustainable by the end of 2015. In other words, that it is purchased in accordance with one of the trading systems approved by the RSPO.”

“We call on other countries in Europe, North America and Asia to follow this example.”

The Netherlands is Europe’s largest trader of palm oil, importing and exporting nearly 2.5 million metric tons in 2007. Much of the palm oil goes into products sold in other European countries.

The commitment, which was presented today to Henk Bleker, Dutch Minister of Agriculture and Foreign Trade, as a manifesto [PDF], comes under the Dutch Taskforce Sustainable Palm Oil, a group that includes associations representing the Dutch refining industry, food manufacturing industry and feed industry. The taskforce was initiated by the MVO, which participates in the RSPO.

In a statement, Bleker commended the move. 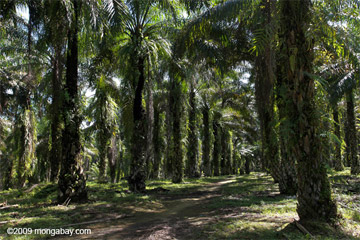 Palm oil plantation in Sumatra. Photo by: Rhett A. Butler.

“The Task Force is a very good initiative that shows everyone can take responsibility,” he said. “We will all benefit from sustainable palm oil, so this is good news for palm oil producers, for palm oil traders, and for Dutch consumers as well.”

Global palm oil consumption stands at nearly 50 million tons per year, about half of which is traded internationally. It is used widely in processed foods, cosmetics, and soaps — WWF estimates that palm oil is found in roughly half of packaged supermarket products. It is also increasingly used as a biofuel.

But while palm oil is a highly efficient crop, surging production over the past 20 years has spurred strong backlash from environmentalists who note its expansion has consumed vast areas of rainforest in Malaysia and Indonesia, triggering substantial greenhouse gas emissions and putting endangered wildlife—including orangutans, pygmy elephants, Sumatran rhinos and tigers—at risk. Oil palm plantation development has also exacerbated social conflict in some areas.

The RSPO emerged as a response to these concerns. The body—which includes industry stakeholders as well as environmentalists and other groups—sets sustainability criteria for palm oil production. Nevertheless the initiative has been battered over the past year with revelations that some members have continued to destroy ecologically sensitive habitats. Prominent members, including Unilever and Nestle, have had to act outside the RSPO process to address misconduct by RSPO-member suppliers. Some critics say the scheme lacks oversight, sets a low bar for compliance, and is underfunded. Supporters argue that RSPO is still a relatively new initiative that needs more time to prove itself. The RSPO recently censured a member—PT SMART—which had failed to comply with the body’s rules. SMART, which has lost a number of major clients including Unilever, Kraft, Burger King, and Nestle, is now working to clean up its operations.