Indonesia gets first $30M from Norway under $1B forest deal

Norway has agreed to transfer an initial $30 million to Indonesia under its $1 billion REDD+ (reducing emissions from deforestation and forest degradation) partnership with the Southeast Asian country.

The fund will go towards Phase I of the partnership, which include “the establishment of an Indonesian REDD+ agency, development of a comprehensive national REDD+ strategy, implementation of an interim funding instrument, development of a monitoring, reporting and verification (MRV) framework, selection of a pilot province and the implementation of 2-year moratorium for new concessions on natural forests and peatland, commencing in 2011,” according to the Indonesian government. 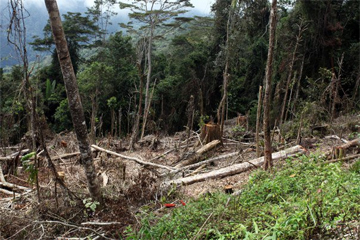 Rainforest and deforestation in Indonesia’s West Papua province, on the island of New Guinea.

The agreement came during a meeting between Indonesian and Norwegian delegates in Jakarta on August 18 and 19.

Supporters of the Indonesia-Norway partnership on REDD+ say it could shift Indonesia’s development model away from one that consumes forests to one that protects forests. Detractors are concerned the money will be lost to corruption—as has been the case with Indonesia’s existing reforestation fund, which has lost more than $6B over the past 20 years—or used to subsidize large-scale conversion of natural forests to industrial timber and oil palm plantations.

The Indonesian government says the national REDD+ strategy “will be designed through an inclusive multistakeholder process.”

“It will not only focus on addressing all significant drivers of deforestation, forest degradation and peatland conversion, but will also aim to implement low carbon economic growth strategies and will contain all necessary financial safeguards as well as environmental and social safeguards to protect communities and biodiversity,” read a statement issued by President Susilo Bambang Yudhoyono’s Climate Change Council. “Norway will contribute to the financing of the policy and program infrastructure which will eventually generate revenue based on demonstrated [greenhouse gas emissions] abatement.”

Indonesia has committed to reducing emissions by up to 41 percent from a projected 2020 baseline provided it recieve international assistance in the form of technical and financial support. Deforestation, forest degradation, and peatlands drainage and conversion is the source of about 80 percent of the country’s emissions.

(03/19/2009) While citizens in western countries have long paid lip service to saving rainforests, Norway has quietly emerged as the largest and most important international force in tropical forest conservation. The small Scandinavian country has committed 3 billion krone ($440 million) a year to the effort, a figure vastly greater than the $100M pledged — but never fully contributed — by the United States under the Tropical Forest Conservation Act (TFCA). Norway now hopes it can help push to include forest conservation in the successor to the Kyoto Protocol by providing funding and fostering cooperation among international actors like the UN and World Bank, as well as developing countries, to fund the creation of an international architecture which makes it possible to incorporate deforestation and degradation into a post-2012 climate regime.