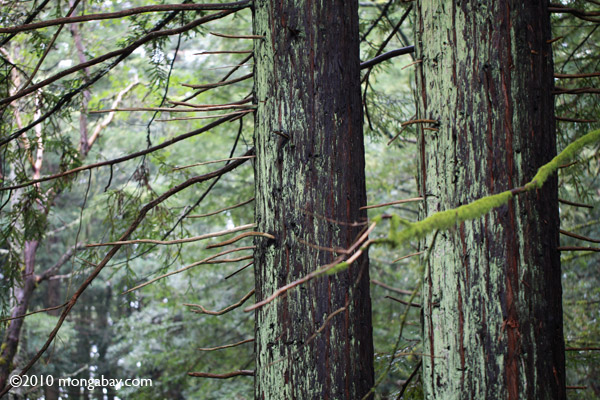 A surprising new study finds that during the past century the frequency of fog along California’s coast has declined by approximately three hours a day. Published in the Proceedings of the National Academy of Sciences the researchers are concerned that this decrease in fog threatens California’s giant redwoods and the unique ecosystem they inhabit.

“As fog decreases, the mature redwoods along the coast are not likely to die outright, but there may be less recruitment of new trees; they will look elsewhere for water, high humidity and cooler temperatures,” explains coauthor Todd E. Dawson, professor of integrative biology and University of California, Berkeley professor of integrative biology with the Department of Environmental Science, Policy and Management (ESPM).

“What does that mean for the current redwood range and that of the plants and animals with them?” he adds.

Evaluating data from airports along the northern California coast, researchers were able to find a steady link in the occurrence of coastal fog and large temperature differences between coast and inland areas. Then by examining temperature data from 114 stations up and down the Pacific Coast, the researchers found that the temperature contrasts between coast and inland areas had shrunk over the past century leading to a decline in fog.

“Since 1901, the average number of hours of fog along the coast in summer has dropped from 56 percent to 42 percent,” explains study leader James A. Johnstone, a postdoctoral scholar at UC Berkeley’s Department of Environmental Science, Policy and Management (ESPM). “A cool coast and warm interior is one of the defining characteristics of California’s coastal climate, but the temperature difference between the coast and interior has declined substantially in the last century, in step with the decline in summer fog.”

This drop in fog occurrence along with the change in temperature contrasts means that “coast redwood and other ecosystems along the U.S. West Coast may be increasingly drought-stressed, with a summer climate of reduced fog frequency and greater evaporative demand,” adds Dawson. “Fog prevents water loss from redwoods in summer, and is really important for both the tree and the forest. If the fog is gone, we might not have the redwood forests we do now.”

Johnstone and his colleagues are uncertain whether the temperature changes, and thereby the decline in fog, is apart of a natural cycle or linked to human impacts such as climate change. But in order to find the answer they plan to next look at redwood tree ring data and stable isotopes from redwood cellulose to construct the past climate of the coast.

“Redwoods live for more than 2,000 years, so they could be a very important indicator of climate patterns and change along the coast,” Dawson says.

Only 5 percent of primary growth redwood forests survive today; the rest has been logged or developed. According to Save the Redwoods League, eighteen percent of the remaining coastal redwood forests are protected, the rest lies either on private land or in natural forests, which could be logged in the future. Save the Redwoods League, along with Berkeley Atmospheric Sciences, funded the study.

(08/07/2009) A recent study by the U.S Geological Survey (USGS) indicates a substantial decline in the number of large-diameter trees in Yellowstone National Park. Between the 1930s and the 1990s there was a 24% decline in large diameter trees.

(01/30/2009) California appears to be on track for its worst drought since the early 1990s, warned the state’s Department of Water Resources (DWR) following its survey of snowpack and other water resources.

(06/24/2008) Two-thirds of California’s native plants could suffer an 80 percent or more reduction in geographic range by the end of the century due to changing climate warns a study appearing tomorrow in the open-access journal PLoS ONE.