A new study in Science shows that farming practices in China are acidifying the nation’s soils and threatening long term productivity at a time when food concerns worldwide have never been higher. The culprit is the increasing use of nitrogen fertilizer.

“Chinese agriculture has intensified greatly since the early 1980s on a limited land area with large inputs of chemical fertilizers and other resources,” the authors note, pointing out that nitrogen fertilizer consumption in China reached 32.6 million tons in 2007, an increase of 191 percent over 1981 levels.

“The rates of [nitrogen] applied in some regions are extraordinarily high as compared with those of North America and Europe. These have degraded soils and environmental quality in the North China Plain and in the Taihu Lake region in south China,” the authors explain.

To determine whether or not this massive increase in chemical fertilizer use was causing acidification nation-wide, the authors compared all available data about pH levels of the soil in the 1980s as opposed to 2000-2008. The study found what it calls “substantial changes”: on average pH declined 0.13. Cash crops decreased in their pH by even more: on average 0.30.

In some select areas “soils are approaching pH values at which potentially toxic metals such as Al and manganese (Mn) could be mobilized,” the authors write, concluding that “overall, anthropogenic acidification driven by [nitrogen] fertilization is at least 10 to 100 times greater than that associated with acid rain.”

The study comes just a few days after China released a national pollution survey which revealed a surprisingly high link between water pollution and agricultural practices, such as overuse of fertilizer and pesticides. The survey found that 43 percent of the nation’s extensive water pollution problem could be linked directly to agriculture.

The researchers suggest that China take immediate action to stem overuse of fertilizers and change its agricultural practices to correct the acidification of its soils. 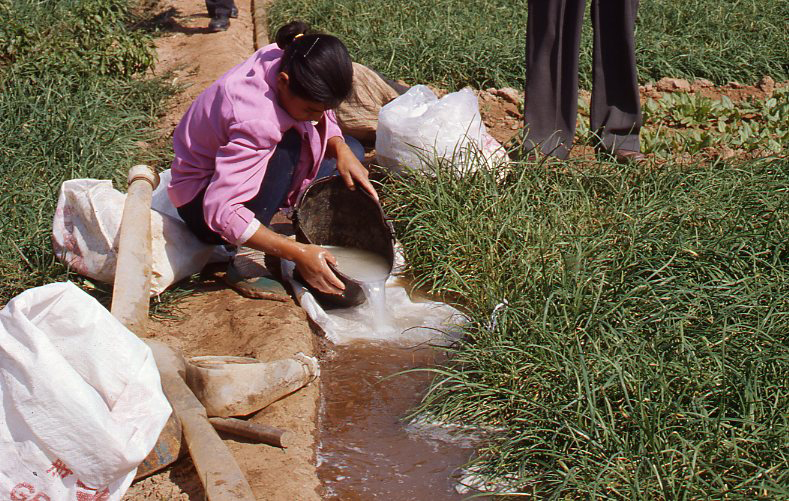 Nitrogen fertilizer (urea) was dissolved in water and applied to vegetable field through flood irrigation, which is subject to serious N loss by nitrate leaching and/or gaseous N emission. Photo by F.S. Zhang.

(02/09/2010) The first ever national survey of pollution in China shows a nation that has paid for its economic growth in environmental pollution.

(10/29/2009) A new study by Greenpeace has found high volumes of heavy metals and organic chemicals in China’s Pearl River, which provides drinking water for 47 million people.

(08/31/2009) Air pollution in eastern China over the past half century has reduced rainfall and exacerbated the risk of drought and crop failures, reports a study published in the Journal of Geophysical Research.