While one tropical forest policy group saw hopeful signs emerging in the most recent revision of the negotiating text on the reducing emissions from deforestation and degradation (REDD) mechanism at climate talks in Copenhagen, activist groups are warning that there remains a substantial logging loophole for developed countries.

“The latest proposal from Annex 1 parties would not only allow countries to conceal large quantities of emissions from forestry using complicated accounting tricks, but would also let countries change rules at a later date to hide even more,” said the Ecosystems Climate Alliance (ECA), a coalition of activist groups, in a statement.

“The so-called logging loophole stems from a proposal brought to Copenhagen by developed countries with powerful forestry sectors, including Sweden, Austria, Finland, New Zealand, Japan and Canada,” the statement continued. “The proposal seeks ‘projected baselines’ that would allow countries to claim credits for forestry activities even while these emissions are actually increasing. The loophole could be closed simply by comparing future forestry emissions with emissions in the past, just as in other sectors.” 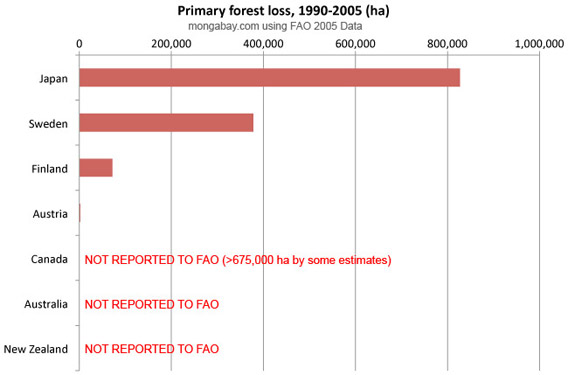 “Christmas is coming early for developed countries in Copenhagen,” said Alex Kaat of Wetlands International. “Not only can they pick and choose what they want to count, they’re building in an escape clause if it turns out later that they don’t like their baselines after all.”

Andrea Johnson of the Environmental Investigation Agency said the lack of integrity among major logging countries in the developed world could undermine efforts to reduce tropical deforestation.

“Can we really ask developing countries to adopt better rules and practices than developed countries are willing to use for themselves?” said Johnson. “The hypocrisy is stunning.”

Editor’s note: The ECA subsequently retracted its comment regarding Finland’s land use practices and carbon accounting.

Progress made on two key REDD issues in Copenhagen

(12/15/2009) Negotiators in Copenhagen have made progress on two key issues for the reducing emissions from deforestation and degradation (REDD) mechanism, reports a forest policy group.

(12/12/2009) Activist group have condemned the latest draft text of an agreement that aims to protect rainforests as a means to mitigate climate change.