Friday’s defeat of the Lieberman-Warner Climate Security Act (S. 3036) by the Senate is being painted by environmentalists as a step towards future legislative success.

The cloture vote on the Lieberman-Warner Climate Security Act officially fell 12 votes shy of the 60 needed to move the amendment process for the bill forward. Senators Barbara Boxer (D-Calif.) and Joe Lieberman (I-Conn.) — supporters of the legislation — said they are counting this as a 54-36 vote because six senators — Hillary Clinton (D-N.Y.), Barack Obama (D-Ill.), John McCain (R-Ariz.), Norm Coleman (R-Minn.), Joe Biden (D-Del.), and Ted Kennedy (D-Mass.) — said they would have voted for cloture had they been present.

Environmentalists said despite the loss, the 54 votes cloture “demonstrates commitment to action on global warming.”

“Today, a majority of the Senate sent a message to Americans and the rest of the world that they believe the time is now to confront climate change,” said World Resources Institute President Jonathan Lash. “Including statements of support from senators unable to cast their votes, 54 senators went on record as believing this is too important an issue to ignore, and this is too important an opportunity for progress to refuse a serious debate.”

“This was a stronger climate bill than Congress has previously debated, and it represents progress in our nation’s commitment to tackle global warming emissions, and to help reduce the worst effects that global warming will have on people, natural resources and wildlife,” said Rodger Schlickeisen, president of Defenders of Wildlife. “I am pleased that the Climate Security Act included the detailed policy direction and necessary investment to reduce the increasing harm global warming is already causing wildlife and the natural resources base that sustains us all.” 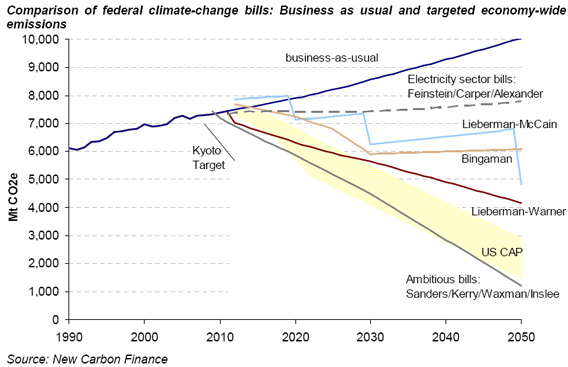 The top line (blue) illustrates how emissions might develop in the absence of any cap-and-trade programme (business-as-usual or BAU), and includes the expected impact of the recently passed Energy Bill, state Renewable Portfolio Standards (RPS) and various other policies expected to reduce emissions outside of cap-and-trade. The bills included in the low and high-demand scenarios have been grouped together since their targeted emissions reductions are very similar (dotted grey line for low-demand scenario and solid grey line for high-demand scenario). It is interesting to note that the targets suggested by the US Climate Action Partnership, an important group of multinationals and other organizations aimed at pushing the federal government for action on climate change, are more stringent (see yellow area) than the Lieberman-Warner (solid brown line).

“The Senate’s consideration of the Lieberman-Warner Climate Security Act this week marked a significant milestone in the effort to turn the tide on global climate change,” said Dr. Richard Moss, vice president of climate change at WWF. “In a clear sign of the changing political climate in Washington, ten senators who opposed the previous climate bill in 2005 voted in favor of advancing Lieberman-Warner —a much stronger bill.”