A giant squid has washed up on a beach on the western coast of the Australian island Tasmania, reports Reuters.

Wildlife scientists took samples from the creature for further study.

Giant squid can grow to a length of 10 meters (33 feet) or more and weigh in excess of 275 kilograms (600 pounds). The marine mollusk is exceeded only in size by the poorly known Colossal squid (Mesonychoteuthis hamiltoni) which can top 14 meters (45 feet) in length. Earlier this year fishermen in New Zealand captured a Colossal squid for the first time.

The giant squid is somewhat less mysterious to scientists, though still little is known about its biology. 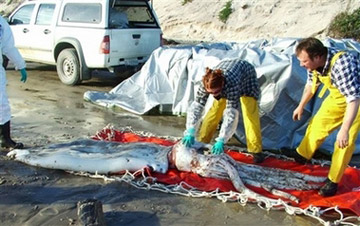 The Architeuthis giant squid on Tasmania’s on Ocean Beach, near Strahan. Pictures taken July 10, 2007 by the Tasmania Parks and Wildlife Service.

In 2005 Japanese researchers caused a sensation when they captured the first video of a live giant squid off the Ogasawara Islands, western North Pacific. Earlier this year they published their findings on the animal, reporting that giant squid (Taningia danae) are highly active predators that use blinding light flashes to confuse their prey.

The authors — Tsunemi Kubodera of Tokyo’s National Science Museum, Yasuhiro Koyama of the Japan Broadcasting Corporation, and Kyoichi Mori of the Ogasawara Whale Watching Association — report that giant squid generally stay at a depth of 600-900 meters during the day but ascend to shallower depths at night to hunt their prey, which consists of fish and smaller squid. Squid were found to be aggressive attackers that use their large triangular fins to maneuver quickly both backwards and forwards.

The authors observed frequent discharge of bioluminescent light flashes which they believe are used by the squid for hunting and communication with other squid. 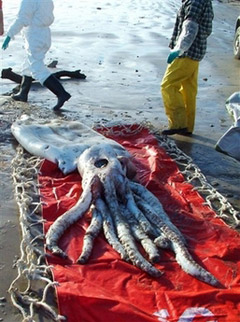