Nigeria has the world’s highest deforestation rate, Brazil loses the largest area of forest annually, and Congo consumes more bushmeat than any other tropical country. These are among the findings from mongabay.com’s analysis of new deforestation figures from the United Nations.

Monday, the Food and Agriculture Organization of the United Nations (FAO) released its 2005 Global Forest Resources Assessment, a regular report on the status world’s forest resources. Overall, FAO concludes that net deforestation rates have fallen since the 1990-2000 period, but some 13 million hectares of the world’s forests are still lost each year, including 6 million hectares of primary forests. Primary forests — forests with no visible signs of past or present human activities — are considered the most biologically diverse ecosystems on the planet.

South America — where large tracts of the Amazon rainforest are being cleared for cattle ranches and soybean plantations — suffered the largest net loss of forests between 2000 and 2005 of around 4.3 million hectares per year. Scientists are concerned that forest loss could escalate in the Amazon due to increasingly dry conditions. This year the Amazon suffered the most severe drought on record, leaving rivers dry and communities stranded. Tens of thousands of fires burned.

Africa suffered the second largest net loss in forests with 4.0 million hectares cleared annually. Nigeria and Sudan were the two largest losers of natural forest during the 2000-2005 period, largely due to subsistence activities. At 11.1%, Nigeria’s annual deforestation rate of natural forest is the highest in the world and puts it on pace to lose virtually all of its primary forest within a few years. Malawi, currently in the midst of a severe drought and famine, has the world’s fourth highest deforestation rate.

FAO figures also show Africa is more dependent on bushmeat — wild animals captured as food — than other tropical regions. Bushmeat availability has increased with the construction of logging roads in the rainforest and a number of well-known species including gorillas, chimpanzees, and monkeys are considered at highest risk. There is growing concern among health experts that bushmeat consumption may be linked to the outbreak of unusual tropical diseases including the Ebola virus and Marburg, which broke out earlier this year in Angola. Primates are known to be carriers of these diseases.

The regions with the highest tropical deforestation rate were Central America — which lost 1.3% or 285,000 hectares of its forests each year — and tropical Asia. Tropical Asia —

including the countries of Bangladesh, Bhutan, Brunei, Cambodia, East Timor, India, Indonesia, Laos, Malaysia, Maldives, Myanmar, Nepal, Pakistan, Philippines, Singapore, Sri Lanka, Thailand, and Vietnam — lost about 1% of its forests each year. According to FAO, Vietnam lost a staggering 51% of its primary forests between 2000 and 2005, while Cambodia lost 29% of its primary forests between 2000 and 2005 [Cambodia’s figures were revised by the FAO after this article was published. Original data showed Cambodia’s primary forest cover declining to 122,000 hectares in 2005 from 356,000 hectares in 2000. The new FAO data says Cambodia’s current primary forest cover stands at 322,000 hectares]. Illegal logging, combined with rapid development, is blamed for much of Cambodia’s forest loss.

Due to a significant increase in plantation forests, forest cover has generally been expanding in North America, Europe and China while diminishing in the tropics. Plantations help offset the loss of natural forests but essentially result in an overall decline in global biodiversity as single species plantations replace their biologically richer natural counterparts.

The United States has the seventh largest annual loss of primary forests in the world, according to FAO. In the 2000-2005 period, the United States lost an average of 831 square miles (215,200 hectares, 2,152 square kilometers or 531,771 acres) of such lands which are sometimes termed “old-growth forests.”

Overall, when plantations are added to the picture, the US gained a net 614 square miles (159,000 hectares) of forest per year. The FAO report suggests America’s primary forests are losing ground to modified natural, seminatural, and plantation forests. Earlier this year, the government revoked President Clinton’s 2001 “Roadless Area Conservation Rule” that protected 58.5 million acres of undeveloped national forest, in effect opening more than 90,000 square miles of forests to road construction, logging and industrial development.

Some environmental groups have criticized the UN numbers as “misleading and inaccurate” saying that FAO is using industrial plantations to offset deforestation figures for natural forests while relying on flawed figures provided by governments that varying standards of forest monitoring. The London-based Rainforest Foundation notes that “the UN figure is based on a definition of forest as being an area with as little as 10% actual tree cover, which would therefore include areas that are actually savannah-like ecosystems and badly damaged forests.” Further, says a press release from the organization, “areas of land that presently have no trees on them at all, but that are ‘expected’ to regenerate, are also counted as forests.”

Despite the criticism, industry experts say that FAO has the best figures available across virtually all countries in the world. Mila Alvarez, who tracks forest trends for World Resources Institute and Global Forest Watch (globalforestwatch.org), told the New York Times “The F.A.O. is doing the best it can given what the governments are providing.” Alvarez says the World Resources Institute and other organizations are developing a way to use satellite imagery to analyze forest changes and to verify government estimates. 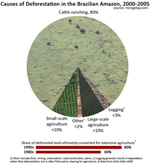 Causes of deforestation in the Brazilian Amazon, 2000-2005

All area figures are in hectares.

Most primary forest cover, 2005. All countries

Most “tropical rainforest”, 2005. These rankings are estimates.

Most number of native tree species, 2005. All countries

The Democratic Republic of Congo should be on this list, but FAO does not have figures for this war-torn country.

Highest total forest cover as a percentage of total land cover, 2005. All countries