EDITOR’S NOTE:
The Amazon River in Peru and parts of Brazil is at its lowest level in 30 years of record keeping. While variable water levels are characteristic of the Amazon river ecosystem, the increasingly extreme fluctuations are of great concern. Low water levels are wreaking havoc on the shipping industry in the region. In Iquitos, a city in the heart of the Peruvian Amazon which is only accessible by plane or boat, ships and barges are having difficulty navigating the river, resulting in serious shipping delays. Local officials in Peru are blaming deforestation of the upper reaches of the Amazon in the Andes for the fall in river levels, although it is likely that larger forces are at least equally important. Warmer ocean surface temperatures in the Pacific and low sunspot activity is also affecting weather in the region. Brazilian meteorologists have discounted the theory that the severe hurricane season off the US Gulf coast has impacted the availability of moisture in the Amazon.

RIO DE JANEIRO, Brazil (Reuters) – Drought in the Amazon rain forest, normally one of the world’s wettest regions, shows the weather cycle is swinging to one extreme rather than signaling climate change, local meteorologists said Thursday.

But weather forecasters added that elsewhere in continental sized Brazil, seasonal spring rains had started in the south and were spreading northwards through Brazil’s major coffee belt and gradually into soybean areas in the center-west. 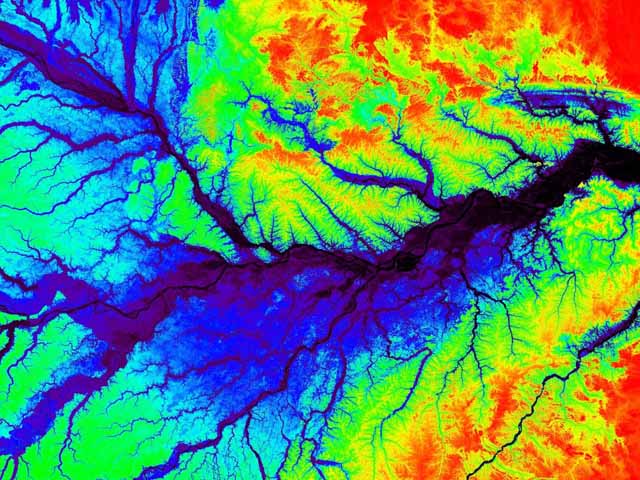 Marengo said that normal rains were forecast for the south Amazon — the states of Acre, Rondonia, southern part of Para state and northern part of Mato Grosso state.

“Rain is forecast in Acre in the next couple of weeks,” he said, adding that the region is normally dry between June and September and wettest in December and January.

But we are a bit worried that there could be less rain than usual at the mouth of the Amazon, around Belem, he said, noting that extreme climatic events were occurring more frequently, “We could be seeing the first symptoms of changing cycles.”

Meteorologists discounted a link between unusually severe hurricanes in the Gulf of Mexico and drought in the Amazon.

Dry weather in the Amazon is linked to warmer ocean surface temperatures in the Pacific and to low sunspot activity, said Expedito Rebello, head of applied meteorology at the government’s National Institute of Meteorology in Brasilia.

“It’s a phenomenal drought and could be linked to a warmer Pacific and little sunspot activity,” Rebello said, noting extremely low water levels in the Amazon.

But he added that the weather cycle would reach a low next year and then start to moderate.

Paulo Etchitchury, director of private meteorologists Somar, said that the Pacific should start to enter a cooler period next Brazilian summer and this could result in a weak La Nina weather pattern.

“It won’t affect summer rains and it’s still very early to talk about next winter,” he said, adding that La Nina doesn’t necessarily signal a cold winter and extra risk of frost damage to Brazil’s coffee crop, the world’s biggest.

Brazil was in a transitional period between the dry May/August winter and rainy spring which started in south Brazil in September, Etchitchury said.

He said that this year weather conditions are in general seasonally normal in Brazil’s main farming areas, except that drought in the Amazon could affect Mato Grosso, Brazil’s main soy state.

“Rains in the south are replenishing a water deficit and providing reserves for summer soy and corn harvests, he said, adding, “Last September was hot and dry and people were worried about drought damage to crop flowering.”

The Amazon River in Peru is at its lowest level in 30 years of record keeping according to a report in Peruvian daily newspaper El Comercio. Local officials say deforestation is the likely culprit of the low water levels. While variable water levels are characteristic of the Amazon river ecosystem, the increasingly extreme fluctuations are of great concern.

Fires have burned more than 1700 square miles (4450 square km) of Amazon rainforest and pasture in Bolivia, prompting the government to declare a state of emergency in two provinces.

The Brazilian National Institute for Spatial Research (INPE) reports that fires have fallen 44% in the state of Mato Grosso, Brazil when compared to last year’s figures.

The Amazon, a vast tropical forest stretching across South America, is so large that is virtually impossible to study the evolving landscapes within the basin without the use of satellites. Scientists have used satellite imagery of the Amazon for more than 30 years to seek answers about this diverse ecosystem and the patterns and processes of land cover change. This technology continues to advance and a new study shows that NASA satellite images can allow scientists to more quickly and accurately assess deforestation in the Amazon.