Commentary by Grant Rosoman on 21 October 2022

This year’s Forest Stewardship Council (FSC) General Assembly in Bali on 9th-14th October marked the most significant change in direction for the certification scheme in the last 20 years.

One of the most distinctive and controversial rules in FSC is the 1994 cut-off on forest conversion. This means that to be FSC certified an organisation can not have cleared natural forest for a plantation after November 1994. 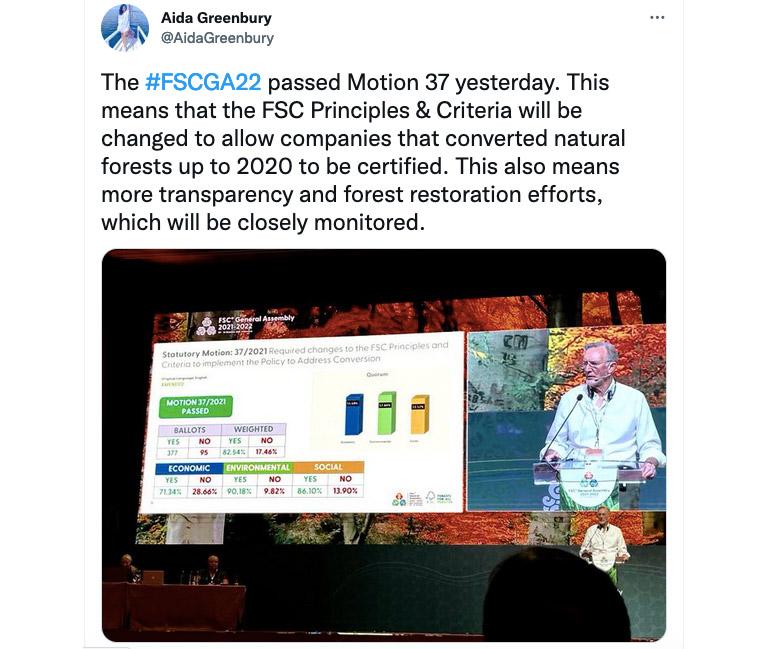 After 15 years of working groups and deliberations on forest conversion, the General Assembly of members voted 83% in favor for Motion 37 to change its Principles and Criteria to address forest conversion. Greenpeace and most NGOs voted in favor of this motion. It may seem contrary to protecting forests and a further blow to FSC’s credibility to allow companies that have converted natural forest up till Dec 2020 to be certified. However let me explain why this could provide a boost to justice and forest protection in countries like Indonesia.

A core principle from the beginning of FSC and a major reason why FSC had strong social and environmental NGO support was its ban on deforestation after 1994. FSC also adopted a Policy for Association in 2008 that included criteria on forest conversion, allowing FSC to kick out pulp and paper companies such as Asia Pulp and Paper (APP), Asia Pacific Resources International Ltd (APRIL) and Korindo.

At the same time many communities were still suffering from the social harm massive forest conversion for plantations had caused and were struggling to get redress. Devastated tropical landscapes were needing restoration. Therefore, the question kept arising: would there be a benefit to FSC providing a way for forest destroyers to find their way back into the system – by redressing their past harms?.

Another core issue was equity. In 1994 when the FSC Principles and Criteria were agreed, including with the conversion cut-off date, ‘global north’ countries such as New Zealand, Australia, USA and European countries as well as Brazil, South Africa and Chile had already converted large areas of natural forest to establish their plantation sectors. Whereas the later developing countries, particularly in Asia and Africa, were yet develop their plantation sectors and convert forest lands. So by the timing of the cut-off date the FSC had unwittingly created baked-in unfairness between countries.

With the escalating climate and biodiversity crisis, the critical importance of forests and their restoration is more and more recognised as a solution. Restoration of natural forests is one of the most efficient and effective ways to take carbon out of the air, storing many times more carbon than plantations. Forests also conserve biodiversity and support local community livelihoods. Could FSC play a role in bringing companies that have destroyed forests to address the social and environmental harms of the past and provide benefits for people and planet?

The changes to the FSC Principles and Criteria via Motion 37 and its associated Motion 45 on the FSC Remedy Framework that provide the requirements for addressing the harm, open the door now for organisations excluded from FSC to come back in. Along with other NGOs, we were guided by voices from the communities who are seeking redress from the plantation companies as well as the potential massive new areas of forest for restoration and conservation. The potential benefits are huge – more than a million hectares for APP and APRIL alone – even though there are risks that FSC will not implement a strong set of remediation and restoration requirements that bring impacts on the ground. FSC has a checkered history with implementing its system strongly on the ground.

Other potentially greater risks include companies using the certification and association process to greenwash themselves before they have completed tangible progress, and the lack of transparency in the past of deforestation and social harms being done by ‘shadow’ companies associated with the companies seeking to get certified.  However, FSC’s new requirements that include corporate group analysis and transparency to identify these shadow companies and their legacy of deforestation and human rights abuses will go a long way to address this.

From July 2023 the remediation and restoration path opened by motions 37 and 45 will begin, following the closing up of many technical loopholes such as settling on what the threshold is for conversion and what constitutes ‘minimal conversion’. The new rules and framework provide a platform for local communities to seek long-awaited redress and for NGOs to closely monitor companies’ commitments and efforts to find their way back from their sins of the past.

Other highlights from the FSC General Assembly were a new inclusive way forward on implementing FSC’s rules on protecting Intact Forest Landscapes (IFL) and Indigenous Cultural Landscapes (ICLs) (Motion 23), where outside the Forest Management Unit landscape approaches will be developed and ecosystem services procedures strengthened along with local fine-tuning of maps to better identify IFLs. Disappointingly however, Western economic interests didn’t support financing incentives and benefits for the protection of IFLs and ICLs, particularly for Indigenous Peoples. A motion passed that more clearly linked FSC certified areas to carbon offsets through its ecosystem services system and claims. The economic chamber members also shockingly voted against members having a say on whether FSC changes its position on GMO trees (Motion 44) and on utilizing volume tracking of wood products in high risk supply chains to prevent fraud (Motion 30).

At the end of the General Assembly I was left asking why Western companies and economies reject taking responsibility for their contribution to planetary decline through past forest conversion or products purchased from deforestation, such as by providing financing, and will the inequality in FSC ever be righted? In many ways it reflects the overall failure by Western nations to make systematic change and to finance climate adaptation and mitigation in the Global South such as Indonesia.