Analysis by Alain Karsenty on 21 October 2022

Asian companies made their entry in force in the 1990s, in Cameroon, Gabon and Equatorial Guinea. In Southeast Asia, companies intensively and unsustainably logged the dipterocarp forests, the tall, straight-trunked trees so valued by the plywood industry.

Implicitly, it was decided that there would be only one harvest, leaving heavily degraded forests. What followed was mainly oil palm plantations, with the price per ton of oil doubled from the beginning to the end of the decade. The conglomerates have portfolios of companies adapted to this transition: logging, oil palm, fast-growing tree plantations for pulp. The exploitation of natural forests provides the basis for capital accumulation and government connections facilitate the conversion of degraded forests into agricultural land.

In the early 1990s, a powerful Malaysian company, Rimbunan Hijau (RH), developed activities in the three countries mentioned. The company was founded in 1973, its founder was “Chinese-Malaysian.” RH diversified, adopting fields as varied as palm tree plantation or telecommunications. It operated under the name of Shimmer International in Equatorial Guinea and Cameroon, from the mid-1990s. In Gabon, it created three subsidiaries in order to circumvent the rule that limits the surface area that a single company can hold to 600,000 ha.

In Cameroon, where RH established itself in 1995, its Shimmer company operated several licenses through subsidiaries created for the occasion or as subcontractors of Cameroonian beneficiaries. Debroux and Karsenty (1997) describe the objectives and practices of the operator. Two characteristics stand out: the relative lack of attention to the quality of the logs exploited and the speed of exploitation. 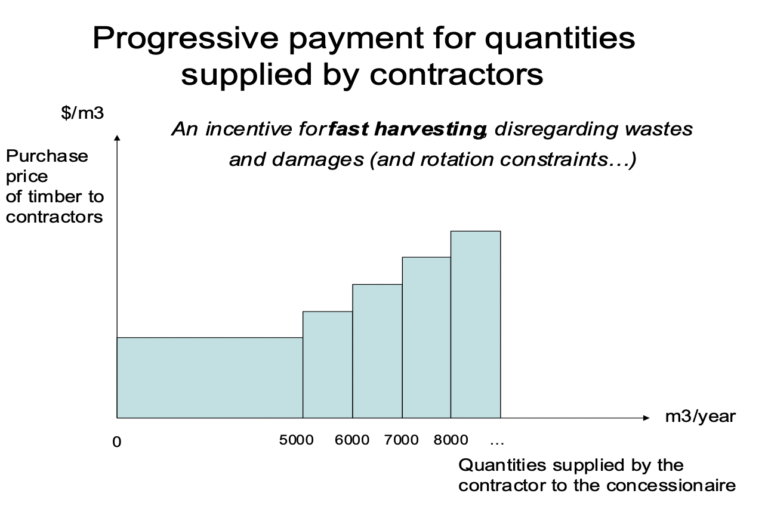 While the exact terms of the contractual arrangements may vary from company to company, the use of subcontracting with high delivery quotas or financial incentives, appears to be fairly systematic, and Chinese companies in Central Africa routinely practice it. Subcontractors are under daily pressure to deliver timber or, if the contract allows them to keep timber above the quota, to maximize production. This makes it unlikely that one of the basic rules of forestry will be followed: rotation, which means logging only one annual cut and then leaving it to regenerate for 25 or 30 years.

RH will not remain in Cameroon, which restricted log exports in 1999 and introduced a competitive allocation (auction) mechanism for permits in 1996-97. The firm focused on Equatorial Guinea whose natural Okoumé forests, a veneer species found in two other countries (Gabon and Congo), as well as the absence of management constraints, are attractive.

In Equatorial Guinea, Shimmer (RH) is the dominant company, but it subcontracts some of its permits to Chinese companies. Another large Malaysian company, Taman Industries, is moving into southern Congo, another Okoumé region. Chinese companies were to invest in the region very soon afterwards, starting in 1995 in Gabon. They have obtained concessions or buy out European companies, such as the French family company SBL (bought out by Chinese public interests) or the French GEB (bought out by Shengyang).

The Thanry family company’s interests are bought by Vicwood in Cameroon, Congo and CAR. Other Chinese companies are also buying up discretionary permits from African operators close to the powers that be. For example, Wanpeng will buy back a concession linked to General Amisi in the DRC in 2019.

In Congo, Wanpeng has acquired an 80% stake in Christelle SARL, owned by the daughter of President Sassou Nguesso. Wanpeng, a conglomerate specializing in maritime freight, import-export of cement and steel, has logging subsidiaries in 10 African countries (including Equatorial Guinea in addition to the two in the Congo), but hardly appears in production and export statistics.

In Gabon there is Hua Jia, a subsidiary of the state-owned China International Forestry Group Corporation, but three-quarters of its capital is held by the private conglomerate Yihua (health, tourism, etc.). Dejia Group, a conglomerate controlled by tycoon Xu Gong De, has two companies in Congo (SICOFOR and CDWI) and two in Gabon (SSMO and SBM). Numerous other Chinese companies dominate the forestry landscape in Gabon (over 60% of concessions under Chinese control), southern Congo, and the DRC. In North Congo and Central African Republic, they control about 25% of the area. Only in Cameroon is the Chinese presence a little less marked, while Vietnamese loggers, often illegal, have become significantly important in the timber trade in recent years.

See related: Is a European proposal on imported deforestation too punitive?

Reasons for power and methods

Chinese logging companies, when owned by conglomerates, have significant financial resources and a large market in China (though not exclusively). Operations are often conducted on the basis of pre-financed orders from customers, which provides strong cash flow when demand is strong, but can be problematic when buyers cut back on orders, as during the COVID crisis (immediate cash flow effects).

Asian companies came to Africa primarily to harvest and market logs (unprocessed wood). China imported, in 2018, 11 million m3 of tropical logs, including more logs, and the rise of Asian firms has something to do with that. Chinese firms have apparently complied with obligations to build processing units, which are often “alibi mills” operating far below capacity and established to obtain log export quotas.

In 2010, the Gabonese government, noting its inability to enforce log export quotas, decided to ban the export of unprocessed wood. Chinese companies will adapt and invest in the free trade zone near Libreville, even though several recent scandals of fraudulent log exports in containers involved Chinese companies. After 2010, Gabon’s (declared) log exports dried up, but by substitution effect, they soared in Guinea, Cameroon and Congo. The forestry ministers of these countries came together under the subregional organization of the Central African Economic and Monetary Community (CEMAC) in 2020, and decided to ban the export of logs as early as 2022. In 2021, given the budgetary difficulties of these countries, this ban was postponed to 2023.

In 2019, a report by the Environmental Investigation Agency, including numerous off-the-record interviews with officials of several Chinese companies in Gabon and Congo, shed new light on certain practices:

State-owned companies and others

Among the Chinese companies that now dominate the forestry sector in Central Africa, a distinction must be made between those with state capital (such as SBL in Gabon, or Sunry-Sunly, a subsidiary of COFCO, China National Cereals, Oils and Foodstuffs Corporation) and private companies, which are often formed by former employees of Chinese state-owned enterprises operating in the forestry economy in Gabon. The government in Beijing is increasingly concerned about the image of natural resource exploitation activities by Chinese companies, particularly in Africa. In 2007, the Chinese State Forestry Administration issued guidelines for logging companies operating abroad to comply with local laws and regulations.

Gabon is where things could change. Asian companies have their own union, the Union des Forestiers et Industriels Asiatiques du Gabon (UFIAG). But four Chinese companies have joined Union des Forestiers et Industriels du bois du Gabon (UFIGA), the union dominated by European companies, committed to development, legality and certification. President Bongo announced in 2018 that Forest Stewardship Council (FSC) forest management certification would become mandatory by 2022 (pushed back to 2025). The Gabonese government relies on the firm Olam for its agro-industrial and infrastructure projects, and seems to be playing an Indian card in the field of wood (a large part of the industries installed in the free zone are Indian). The current Gabonese government’s intention is to keep only a few very large companies supplying logs to the special industrial zones.

Many of the Chinese companies are clearly targeted by the FSC certification obligation. No Asian company in Central Africa is currently in a position to obtain such certification, but some have obtained or are working to obtain certificates of legality, and possibly the Pan-African Forest Certification (PAFC), recognized by the PEFC (Program for the Endorsement of Forest Certification). It is likely that Chinese state-owned companies will try to fit into the management mold and move toward certification, if they can control the work of their subcontractors. But if the government line does not change, many Chinese private companies will leave. With the Covid crisis and the halt in orders for several months, several Chinese companies have already left Gabon (although some have returned).

The ban on log exports in the CEMAC zone, if it actually comes into effect in 2023 or a little later, should not change the presence of Chinese companies in the forestry sector too much, although some may leave a sector that has become less lucrative. But despite some certified companies practicing fairly good management, the forest resource is degrading and the “primary forest rent” is being depleted. In SE Asia, conglomerates have been active in converting degraded natural forests into agricultural plantations. As African governments see agribusiness as a major lever for “emergence,” it is possible that a new story, even more unfavorable to African forests, will begin.

Alain Karsenty is an environmental economist and senior scientist at the French Agricultural Research Centre for International Development (CIRAD) in Montpellier, France. He is the author of dozens of scientific articles and is the co-author of several books.

Editor’s note: Following publication of this analysis, a source in Gabon reported to the author that Rimbunan Hijau (RH), which owned three subsidiaries there (Bordamur, Toujours Vert and Grand Bois) had earlier this year sold its forestry assets to Gabon Special Economic Zone (GSEZ), the joint venture between the Gabonese Government and Olam, the Singapore-based conglomerate. GSEZ manages the free zones (there are three currently in Gabon) and has acquired numerous forest permits throughout the country to ensure a supply of logs to mills in these zones (GSEZ now controls the largest share of Gabonese forests, more than two million hectares). The reasons for RH’s pull-out from Gabon are unclear, but the tightening of forest management regulations is likely to be one of the reasons.