JAMBI, Indonesia — Rahmad Saleh Simbolon, who died of a heart attack on Aug. 9 at age 47, is remembered by both civil society and government officers as a dedicated and effective environmental leader in Sumatra, particularly for his work safeguarding one of the island’s largest elephant populations.

Rahmad went on to work at Sembilang National Park, on the northern coast of South Sumatra, a peatland biosphere with more than 250 bird species and an ethnically diverse human population. Following his 2007-10 assignment in Sembilang, he traveled north to take up a posting in the critical Leuser Ecosystem, which bestrides Aceh and North Sumatra. 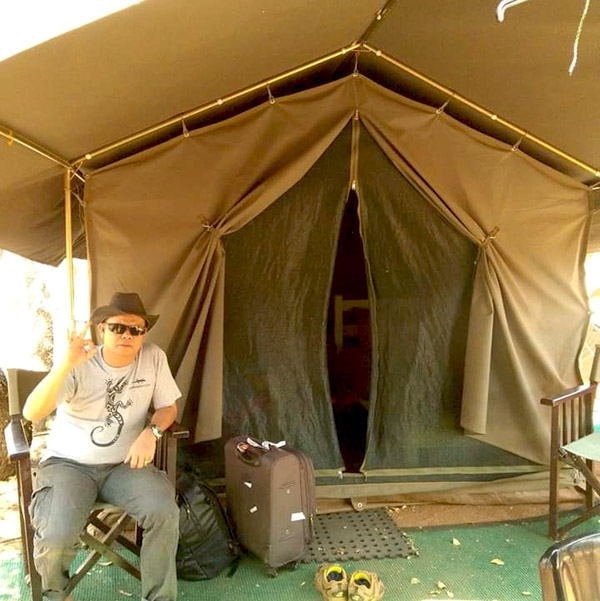 In May 2018, after accepting a promotion as head of Jambi province’s conservation agency, Rahmad told journalists and activists how he viewed the role: that he had been entrusted with a crucial responsibility.

From 2002 to 2021, Jambi province lost 35% of its humid primary forest, according to satellite data published by Global Forest Watch.

“I will work with, and make friends with, anyone who is in step with the issue of conservation,” Rahmad said at the time.

Jambi is home to numerous threatened species, from the vulnerable Senyulong crocodile (Tomistoma schlegelii) to critically endangered Sumatran orangutan (Pongo abelii) and tiger (Panthera tigris sumatrae) populations, all of which face acute pressure from changes to land use in the province, and the accelerating risks caused by climate change.

Jambi’s diverse Tebo district, which has a population of around 340,000, includes the southern chunk of the heavily deforested Bukit Tigapuluh National Park as well as a handful of towns. The district is also home to between 90 and 120 Sumatran elephants, according to local authorities.

However, these elephants have faced grave danger of extinction owing to a logged habitat, and commensurately frequent encounters with humans living in surrounding settlements.

Rahmad was an architect of the a 54,000-hectare (133,000 acres) essential ecosystem area demarcated for protection of the elephants. He used his outreach skills to bring together local community and government, companies and nonprofits to make the zone a reality.

“The management of this essential ecosystem area is faced with various challenges, but if it is managed with the commitment of all parties, then Inshallah [God willing] we will achieve our common goal, namely a prosperous society, sustainable natural resources and justice for all parties,” Rahmad said in July 2020, after the national and regional governments agreed to establish the zone.

“He had this comprehensive perspective that served as the basis for the establishment of this information center,” said Hefa Edison, who runs the Elephant Conservation Information Center in the ecosystem.

“It was not only about the elephants,” Hefa added, “but to consider also the welfare of the community so they could live side by side in harmony.”

Hefa thought of Rahmad not only his boss, but also as a father figure and a brother.

Rahmad’s accomplishments in Jambi extended beyond his work with elephants — he also oversaw construction of an animal rescue facility on the outskirts of Jambi city.

The rescue center was designed for victims of conflict and trafficking, as well as animals brought in from the community. The facility meant the conservation agency no longer needed to remit animals to Jambi’s Taman Rimbo Zoo.

Krismanko Padang, a policy analyst at the Ministry of Environment and Forestry, said Rahmad believed in his work and carried out his duties with integrity.

“[With Rahmad] there was not a lot of theory, just application,” said Krismanko, who was at Rahmad’s bedside in August as his health deteriorated.

“On Wednesday, we were still discussing in his office,” he said. “On Friday, he was critical — I stayed with him until dawn. I was grateful to keep his company.”

Rahmad provided access to journalists reporting on the environment in Jambi.

“Even though there might be negative news stories such as conflicts, animal deaths and other things, Rahmad still provided many facts,” said Irma Tambunan, a journalist in Jambi with Kompas newspaper, a respected national daily.

Efforts to improve the local economy and mitigate the risk of encounters with elephants continue today in Tebo.

A culmination of Rahmad’s work occurred earlier this month on Aug. 6, three days before he died, when Jambi Governor Al Haris inaugurated the Elephant Conservation Information Center, an 4.4-hectare (11-acre) facility Rahmad designed. The main room at the center has been named after him.

“The man had no equal,” said Hefa, who will continue to run the center.

Saving Sumatran elephants starts with counting them. Indonesia won’t say how many are left

A version of this story was reported by Mongabay’s Indonesia team and first published here on our Indonesian site on Aug. 21, 2022.

Banner: Rahmad Saleh Simbolon poses for a photo with a Sumatran elephant. Image via Facebook.