Thanks to a proliferation of unregulated wells, however, Pasuruan risks losing that bounty.

The problem, experts say, is the wasteful discharge of millions of liters of water from hundreds of artesian wells, often reaching dozens of meters below the surface, that aren’t equipped with valves for controlling the discharge, leading to excessive waste.

“This is a serious problem with water management in Pasuruan,” said Ni’matul Khasanah, a soil scientist and ecological modeler with World Agroforestry (known by the acronym ICRAF), which has an office in Bogor, Indonesia.

“Water keeps coming out — it gets wasted into the sea and goes unused.”

An artesian well is a type of well in which natural pressure, rather than a pump, brings the water to the surface.

Deep-bore wells serve as critical infrastructure across the Indonesian archipelago. They helped combat major wildfires on the islands of Sumatra and Borneo in early 2014 and late 2015. 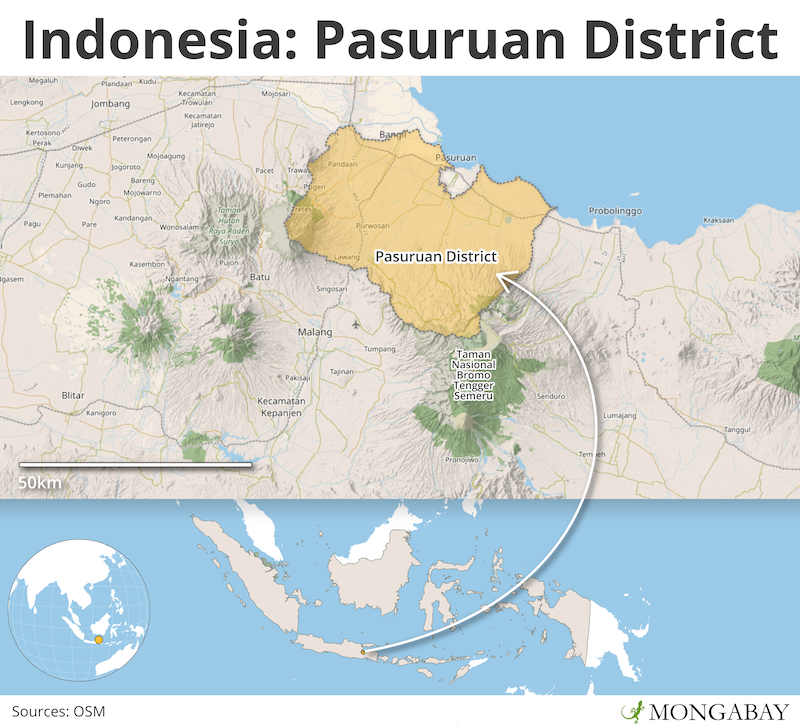 The wells in Pasuruan, used for irrigating farmland, were often built by farmers, sometimes with funding from village administrations, according to Lisa Tanika, an ICRAF water management specialist.

In 2019, ICRAF, quoting a Ph.D student study from the University of Montpellier, counted 600 artesian wells in the Pasuruan subdistricts of Winongan and Gondang Wetan that weren’t equipped with valves for water control.

Assuming one well produces 5 liters (1.3 gallons) of water per second, this means 432,000 liters (114,100 gallons) are being wasted daily, or 12.9 million liters (3.4 million gallons) per month, according to Ni’matul. “In an approximate three-month rainy period, 38 million liters of water are [estimated to be] lost” from each well, she said.

Pasuruan’s farmers are aware of the prolific water loss, Lisa said. But while they want to install valves, they’ve refrained from doing so out of fear the wells will burst during installation, during which the wells must be closed.

The wells in Pasuruan also tend to be poorly constructed, Lisa said. Because the pipe is installed in a hanging position and does not reach the base of the well, the lower wall is liable to collapse and burst. Farmers there typically close a well after two or three years of use and drill a new one, hence the proliferation of the 600-plus wells and counting.

In response, ICRAF has designed a model well that is more user-friendly. The well was made so as not to collapse easily, and a valve was installed to support water conservation.

Lisa said a number of model wells have already been constructed in Pasuruan since 2020. The model well goes down to a depth of 84 meters (276 feet). It differs from the well with the pipe in a hanging position, and has a protective pipe casing installed along its entire length. The pipe is installed to prevent the wall from collapsing.

To reinforce the well, it’s set in cast concrete from a depth of 50 m (164 ft) to the surface. The well becomes safe when a faucet is installed at the pipe outlet. These make the well leak-free and burst-free.

For Lisa, using water thriftily is one key to guaranteeing future water availability. Otherwise, the threat of a water crisis could rear its head.

ICRAF has built seven model wells to date to replace the old deep-bore wells in Gondang Wetan and Winongan.

Water-using farmers’ groups receive assistance on how to manage and maintain the wells. This includes training on logging the daily opening and closing of the valve.

Lisa couldn’t give a figure for the per-meter cost of digging these new wells.

“It is difficult to determine the cost as it depends on the underground rock formation,” she said. “If the rock formation is thick, it can take nearly a month to drill through and for sure the boring cost would be more expensive.”

Taufik, chairman of the Sumber Makmur Jaya farmers’ group in Pasuruan’s Lebak village, said the group’s old well was paid for by members chipping in and that it also received village help. He put the cost at 25 million rupiah ($1,750), but called the valveless well an “improperly constructed deep-bore well.”

Ni’matul said inefficient use of artesian water has strained the Rejoso watershed in Pasuruan.

Use of natural resources without awareness about the need to sustain it degrades the watershed, she said. Indicators of this degradation include the decrease in the discharge rate in a number of water springs, and the occurence of flooding and landslides, Ni’matul said.

Ni’matul called for shutting off the old wells and replacing them with better-built new ones to prevent water loss. But she added this won’t be an easy solution.

Some farmers are adamant about sticking with the old deep-bore wells because they’re cheaper than new designs. Another problem is that there’s no supporting irrigation network in place.

In a number of locations, Ni’matul said, irrigation systems are badly damaged and no longer function. She said she hopes the government can get involved in revitalizing the network. With good irrigation, artesian water use can be minimized, she said.

Taufik, the farmers’ group chairman, said the new well design is stronger than the old wells the farmers use, and more efficient.

“Before [with the old wells], the water discharge would drop in two or three years,” he said. “As for now, the dischrage is stable. If water is not used, the valve shuts the well.”

The single model well that he manages is enough to irrigate 8 hectares (20 acres) of rice fields.

The downside is the cost and the need to anticipate long-term water security, he said.

“Local government should support and make regulations. When a village wants to build a new well, it should get funding from the village budget and meet the ICRAF construction standard to ensure long-term use,” Taufik said.

The Indonesian government provides a 1 billion rupiah ($70,000) annual village fund for each of the country’s 74,900 villages.

Pasuruan’s location means it has a plentiful water supply, for now, said Heru Hendrayana, a researcher at Gadjah Mada University’s department of geological engineering. Mount Bromo, an active volcano, sits in a plain of dark and dusty volcanic sand that is also a groundwater recharge area, producing millions of liters of water annually.

The problem is management. Recharge is good, but if the water is drawn at an uncontrolled rate, it will eventually be depleted, Heru said. In researching the area, Heru found a number of water springs have seen their water discharge rates decrease.

He said there are two possibilities for this: One is the change in land function upstream, and the other is inefficient water use.

“The main cause [of the depleted discharge] is the wasted groundwater,” said Heru, who wrote about Pasuruan’s unregistered wells in a 2021 paper.

He used the analogy of a balloon filled with high-pressure water to describe what was happening.

One characteristic of the groundwater in Pasuruan is that it is high-pressure underground water, Heru said. In his paper, he writes that groundwater can be managed by water transfer, closure of artesian wells, and regulation of well use.

Banner image: A model artesian well that ICRAF installed in Winongan, Pasuruan district. The well is equipped with a valve for more efficient water use. Image by A. Asnawi/Mongabay Indonesia.

A version of this story was first published here on Mongabay’s Indonesian site on March 29, 2022.