Vale told Brazil communities they were in danger. They say Vale wants their land

by Isis Medeiros on 3 September 2021 | Translated by Roberto Cataldo

On Feb. 8, 2019, two weeks after the collapse of a dam holding mining waste killed 272 people and left a trail of destruction in Brumadinho, in the Brazilian state of Minas Gerais, 458 people were evicted from their land in the nearby town of Barão de Cocais. Vale, the Brazilian mining giant responsible for that disaster, had warned of the risk of collapse of yet another of its tailings dams, Sul Superior. The dam held firm, but in the two and a half years since then, the company has continued to violate basic rights and move families from new areas, they allege.

In that fateful week of Vale’s announcement, the international press was all over the story, and Sul Superior went from risk alert 2 to 3, the highest level. A judge, Carlos Pereira Gomes Júnior, ordered all the families in Barão de Cocais’s rural subdistricts of Socorro, Vila do Gongo, Piteiras and Tabuleiro to be immediately removed from their homes to avoid a repeat of the Brumadinho tragedy. Similar steps were taken in other towns where there is at least one dam on highest alert.

Thousands of people have been evacuated, becoming refugees from their own territories.

In November 2020, the risk level for Vale’s Norte Laranjeiras dam was raised to 2 by the National Mining Agency’s (ANM) Integrated Safety System for Mining Dams (SIGBM). Another 10 families from the communities of Laranjeiras, São José de Brumadinho, Boa Vista and Una, also in Barão de Cocais, were evacuated and had to live in rented houses in the town. According to the government’s Civil Defense Agency and Vale, 24 families living downstream of the dam will also be removed soon.

Residents have complained to public agencies that Vale is carrying out controversial construction works in these territories, sometimes driven by hidden interests in the land that’s vacated after the properties are sold. According to a committee of dam-affected people, more than 60% of the properties have already been signed over to Vale, after difficult negotiations that they say were designed to undermine the residents’ repossession efforts.

Those affected say their crops have died over the years. Where once they had access to clean water, now they have to buy it with emergency aid from Vale. They report delays and cuts in their payments agreed at the time of the eviction, negligence by the municipal government, ambiguity on the part of the state prosecutors, and lots of anger. The initial fear of a possible collapse gave way to indignation after countless unsuccessful negotiation meetings with the company, which they see as interfering with the legal procedures for remediating the material and moral damages caused to the communities.

Elida Couto, one of the leaders of the committee, says Vale has manufactured an excuse to move the communities from areas where it intends to expand its business. “Vale threw us out of our home because it wants to use this land for mining in the future — either as an exploration reserve or to mitigate future problems it might have with the community,” she says. “We see that the company is highly interested in buying the land, but they’ll only negotiate in blocks — never with individual residents.

“Vale has cut our basic income in order to pressure residents to negotiate their land soon and speed up the process,” Couto adds. “As people were unemployed, penniless and afraid to be homeless, they started to trade their properties. The company said it was important that we negotiate soon so that we could ‘rebuild our lives.’”

The proximity of Vale’s exploration areas to traditional communities, native vegetation areas and historical buildings could make it difficult for the company to expand its business in the region. In 2019, after 70 days of deforestation and blasting in an area of ​​Atlantic Forest to clear a path for the anticipated torrent of sludge from the Sul Superior dam, the company abandoned the emergency work and concluded that using explosives was not “technically feasible.” By then, it had degraded yet another preserved area. The region affected by the work coincides with two mining sites in which Vale is interested: the Baú mine and the Apolo project, shelved in 2012. If Vale resumes the process and obtains a license for the Apolo project, it could become the company’s second-largest operation in Brazil.

The Apolo project is mentioned in a document drawn up by prosecutors in March this year, which notes that the mining agency website has records of prospecting in the area, and that affected communities have pointed to the interest in mining as a factor for their transfer out of the area.

Luiz Paulo, an activist with the Movement for Sovereignty in Mining (MAM), says Vale took advantage of the situation to expand its area of ​​influence for future investments. “People’s memories were fresh, and they were traumatized after [the] Brumadinho and Mariana [disasters],” he says, the latter being a tailings dam collapse in the Minas Gerais town of Mariana in 2015 in which Vale was also involved, that killed 19 people.

“Vale used these crimes to raise alarm and dominate new territories in Minas Gerais,” Paulo says. “What’s more, there is total interest in mining in this region, where there are large ore deposits that companies won’t reveal.”

Paulo says he doesn’t believe in the prospect of a failure of another Vale tailings dam in Barão de Cocais, the Norte/Laranjeiras dam, for which the company initiated an emergency protocol in November last year. “This dam is at no risk of collapsing. Since it is not upstream, its construction method prevents collapse by liquefaction,” Paulo says. “Before an actual collapse, there would be small leaks. We see this as another plan to evict the population from areas of mining interest.”

He says Vale now owns a large part of this land and wants to control the area, otherwise it would have focused on decommissioning the dam and negotiating the return of the families, thus ensuring the community’s safety.

Decommissioning calls for the complete deactivation and proper disposal of the mining waste held in the dam, and the subsequent reoccupation of evacuated territories by the former residents.

The mayor of Barão de Cocais, Décio Geraldo dos Santos, also says Vale has a hidden interest in the vacated areas. “Vale won’t say it publicly, but they have commercial interest in the areas,” he says. “That’s why they say they can only decommission the dam in 2029. People will give up these lands when they no longer see their neighbors; by then, their properties will already have changed completely. Today, the company is paying much less for the land than it did at the beginning of the negotiations, and its intention is to devalue it and control it.”

Although prosecutors announced on May 27 that the company plans to build a wall to contain the waste that could reach the communities, they note it still hasn’t made a decision about decommissioning the dam. 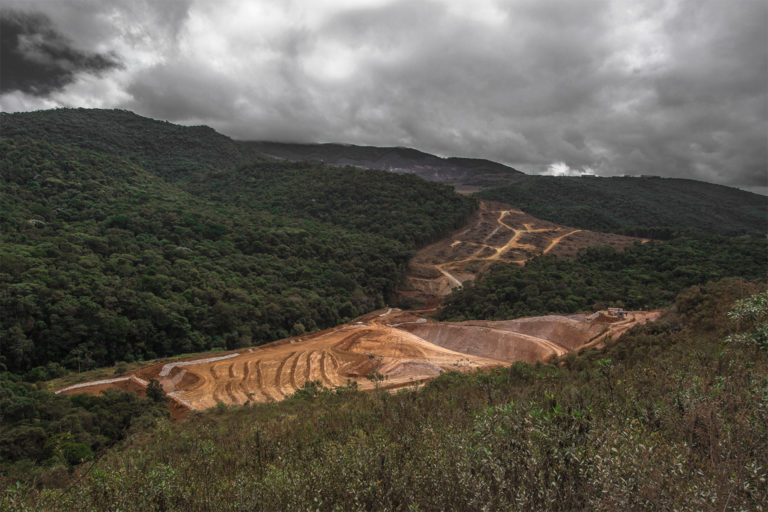 Negotiations between Vale, Minas Gerais state prosecutors and public defenders, and Barão de Cocais municipality have followed a very similar path to Vale’s agreement in Brumadinho. As in the 2019 disaster, the decision on how to mitigate a similar tragedy is being hashed out without the participation of the affected communities. Families affected by the threat posed by the potential collapse of Sul Superior still have four main demands: the immediate decommissioning of the dam; the continuation of basic income payments until such decommissioning is completed; compensation for the moral, economic and reputation damage caused to Barão de Cocais, as well as for the fear instilled; and compensation for the families affected by the dam.

Mongabay contacted Vale, and while the company detailed the measures it’s taking with regard to the dams and the communities, it did not respond about its mining interests in the region.

Mongabay also tried to contact the state prosecutors’ office of Minas Gerais but did not receive a response.

The latest hearing in the ongoing negotiations took place on July 2 at the Minas Gerais Court of Justice. None of the demands made by the communities were settled, but Vale was ordered to keep paying emergency aid to the affected families. The public agencies involved were to present a proposal in agreement with Vale, which also has a right to make a counterproposal. The next hearing is scheduled for Nov. 6.

This story was reported by Mongabay’s Brazil team and first published here on our Brazil site on July 27, 2021.

Banner image: The Socorro community in the municipality of Barão de Cocais, the first area vacated by Vale. Image by Isis Medeiros.