Seed dispersal is just as important as pollination (commentary)

Society has recently become enthralled with bees and the amazing service they provide spreading pollen around and helping to sustain plant populations. From crops to gardens to forests, bees keep the world green, and us fed. But what happens after pollination?

Just like for us and most animals, plant offspring do not tolerate staying with their parents forever. But the problem is that they can’t just walk off. So instead, they hitch a ride (either inside or outside) animals (or sometimes by wind and water). Animals are doing most of the work though, dispersing the seeds of about half of temperate plants and three quarters of tropical plants.

So, who are these animals? Almost everyone’s favorites play some type of role from bats to monkeys, and even wolves and turtles, because everyone loves fruit. And by eating fruit, animals are eating seeds, and moving them elsewhere when they poop. Here are some of the star seed dispersers:

The airline pilots. There are many birds and bats out there that only eat fruit. And because they can fly, they can travel long distances in very short periods of time, taking seeds far away from their parents. One of the best examples are the macaws in Central and South America. These are big birds so they can eat all different sizes of seeds. And they disperse them up to 1.2 km (three quarters of a mile)! Another one of my favorite airline pilots are flying foxes, which are found in East and Southeast Asia and Australia. These are actually bats, not foxes (although it would be cool if foxes could fly). Flying foxes are not good at sharing, and if neighbors come to eat fruit from the tree they’re at, they will chase them away. This is good for the plant, because the flying fox will usually grab a fruit and fly away, taking the seeds far away from the parents.

The trapeze artists. Few animals are as vocal about their love of fruits as monkeys, some of which have dedicated calls for when they find a particularly productive tree. Primates, which include monkeys (everywhere), lemurs (Madagascar), and apes (Africa and Asia), are often up in the trees with the fruit. They can remember where certain fruiting trees are, traveling around to them daily. Some species, such as orangutans (Indonesia’s great ape), eat up to 400 types of fruit! That is a huge service they are providing to sustain forests.

The forgetful gardeners. Some plants take advantage of the weaknesses of some animals. Scatter hoarders, such as squirrels and agoutis (Central and South America) go about their day collecting fruits and seeds and burying them. They stop back later to pick them up, but they are just as forgetful as we are with our keys and phones. And their forgetfulness can lead to a new tree!

The cleaning crew. Though we don’t like to think about it, the main way seeds are being dispersed is through poo. And that’s not always great for the seeds. Some animals, such as howler monkeys (Central and South America), drop hundreds to thousands of seeds in the same spot. It’s not possible for that many trees to grow in an area the size of a plate! This is where dung beetles come in. They roll away the dung (including the seeds) and that gives them a little more space to grow.

The long-distance runners. Some species, such as deer, peccaries, and elephants, can travel tens of kilometers in a day. By taking seeds along with them, they can help connect plant populations over large areas.

So now that we know what these animals are doing (other than being photogenic), why is their work just as important (if not more?) than the bee’s?

Seeds that are stuck falling underneath their parents will encounter a lot of difficulties and are unlikely to survive. They will catch diseases from their parents. The herbivores that come to munch on the many leaves of their parents could easily eat an entire seedling. And there is no light!

One of the reasons pollination is important is so that plant populations can stay genetically diverse, which makes them more tolerant of changes in their environment. But if all the plants around are related, then there is only so much the bees can help.

Right now, we are in the 6th Mass Extinction. And the species that are disappearing fast are ones that are easily hunted and ones that can’t be confined to small reserves. Unfortunately, that is all the best seed dispersers, the ones that can eat all sizes of seeds and disperse them at all distances.

What will happen to our forests without them? Unfortunately, we don’t really know yet, although we are starting to see changes toward plants with smaller seeds, which is too bad for everyone out there who loves avocados.

Ariek Norford is a PhD student at Stony Brook University studying the effect of habitat loss and fragmentation on mammal communities and seed dispersal in the foothills of the Andes in Colombia.

More on this topic from Mongabay’s podcast: Great ape conservation in Africa goes hand-in-hand with efforts to protect the second-largest rainforest in the world, listen here: 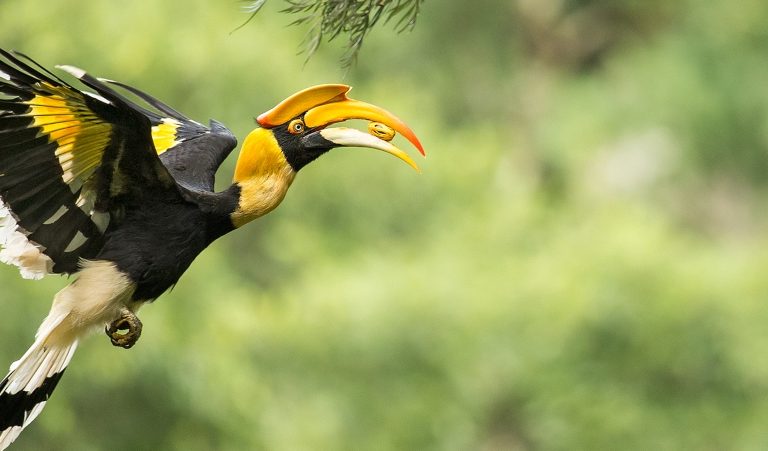