DENPASAR, Indonesia — Lung damage, hunger and disorientation have been cited as the factors that led a pod of 52 pilot whales to a mass stranding on an Indonesian island earlier this year.

Indonesian wildlife experts last week publicly announced their findings from the necropsies conducted on 34 of the 52 short-finned pilot whales (Globicephala macrorhynchus) that washed up on Madura Island this past February. They examined tissue samples from the whales’ bodies, including the stomach and the melon, the fatty round organ at the front of the head that’s key to the animals’ use of echolocation.

The experts said the cause of death of the alpha pilot whale, a female, was shortness of breath caused by damaged air sacs in her lungs, and hunger. Dehydration and exhaustion were found to be the cause of death for the rest of the pod.

They also found severe inflammation in the alpha whale’s melon, which most likely disrupted her ability to navigate and subsequently led her and the rest of the pod to wash ashore. Pilot whales are very social animals that travel in groups.

“This colony was traveling in a triangle form with the youngest at the back. We prioritized [the necropsy] on the leader,” said Bilqisthi Ari Putra, a veterinarian at Airlangga University in the provincial capital Surabaya, who was the chief investigator in the case.

“It’s difficult to determine the source of disease in a migrating wildlife because of the intercontinent [nature of the] travel. But mostly these are chronic diseases that have been experienced for a while,” he added.

Twenty-six of the 34 whales examined were female. Three males from the pod survived the initial stranding and were pushed back out to sea by volunteers and local authorities. But the trio beached again at a different location, and two of them died.

The Indonesian fisheries ministry has called for necropsies to be carried following future stranding incidents, saying the accumulated findings will help improve efforts to handle strandings. Marine mammal experts often cite water pollution, extreme weather and shipping activity as among the possible causes of whale and dolphin strandings. These, and other indicators of ocean health, remain quite low for Indonesia, said T.B. Haeru Rahayu, the fisheries ministry’s director-general of marine planning.

“Indonesia’s Ocean Health Index score is far from satisfactory — at 65 out of 100,” he said. “We need a breakthrough to improve this.”

But conducting necropsies more frequently, while crucial, isn’t enough to draw a complete conclusion on the reasons why they strand and die, said Putu Liza Kusuma Mustika, co-founder of Whale Stranding Indonesia (WSI), a group that logs cetacean beaching events.

Liza said it was important to also investigate external factors, such as weather and electromagnetic disruption caused by human activity.

Mass cetacean strandings are common in Indonesia, which has the longest coastline in Asia and whose waters serve as both a habitat and an important migratory route for dozens of species of whales, dolphins and porpoises. Indonesian authorities have trained some citizens to deal with these strandings, setting up groups of first responders around the country. 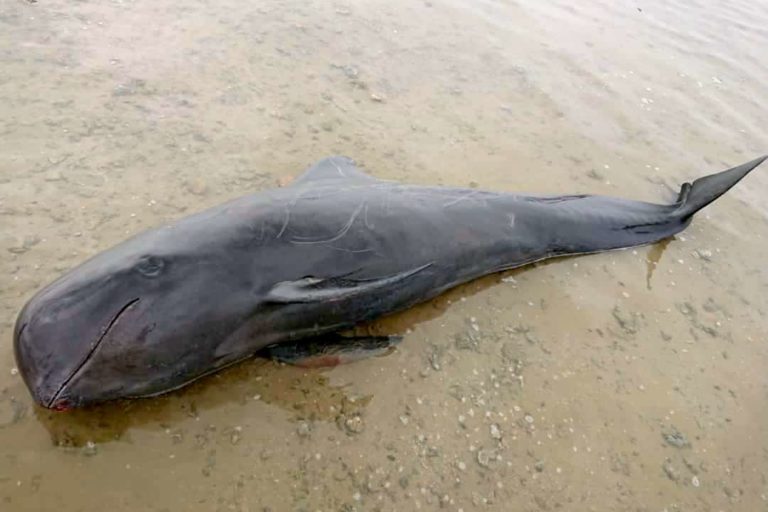 This story was first reported by Mongabay’s Indonesia team and published here on our Indonesian site on April 13, 2021.