Federal prosecutors in Brazil have cited a recent Mongabay investigation into water contamination by a palm oil company in an Indigenous reserve as key evidence in their legal battle to hold the company accountable.

The Federal Public Ministry (MPF) filed an appeal March 26 against a ruling this week, seven years in the making, by a federal circuit court. The March 22 ruling denied a request, filed in 2014, for a forensic investigation into pesticide contamination by Biopalma, Brazil’s top palm oil producer. The investigation would have looked into the socioenvironmental and health impacts of this contamination on the Tembé people of the Turé-Mariquita Indigenous Reserve in the Amazonian state of Pará.

“We do not conform to this decision,” federal prosecutor Felício Pontes Júnior told Mongabay the day before the appeal was filed.

He said the findings from Mongabay’s investigation would be included in the legal battle as a key element to challenge the federal circuit court’s argument that the forensic report could be done later, during the course of a regular lawsuit against Biopalma. The circuit court cited in its ruling a “lack of danger” on the matter.

“For us it is clear that there is danger because it refers to pesticide,” Felício Júnior said. “And pesticides in the Amazon can be washed away by the rain, especially by the runoff that often exists … So because of that, we think the proof is necessary; we will appeal.”

On March 12, Mongabay published the findings of an 18-month investigation into the Brazilian palm oil sector that revealed evidence of water contamination not just in the Turé-Mariquita reserve by Biopalma, but also in other Indigenous reserves and Afro-Brazilian quilombola communities. Mongabay’s investigation also uncovered impacts to ribeirinhos (traditional riverside communities) and small farmers.

Besides Biopalma, other palm oil companies associated with these cases of pollution are Belem Bionergia Brasil (BBB) and Agropalma, in what appears to be an industry-wide pattern of brazen disregard for Amazon conservation and for the rights of Indigenous people and traditional communities. All the companies have denied the allegations, including Agropalma — the only one in Brazil certified by the Roundtable on Sustainable Palm Oil (RSPO), ostensibly the gold standard for sustainability certification in the industry.

The judge in the circuit court hearing, Rafael Paulo Soares Pinto, also argued that it had taken too long since the precautionary action was first filed in 2014 for prosecutors to provide compelling evidence.

“The delay was theirs,” he told Mongabay, “They take a lifetime to judge and then say that it took too long and that they no longer have an interest in producing the expertise report.

“It seems that the process has an end in itself and not in solving [the problems facing] the lives of the people who are being poisoned there,” Silva added. 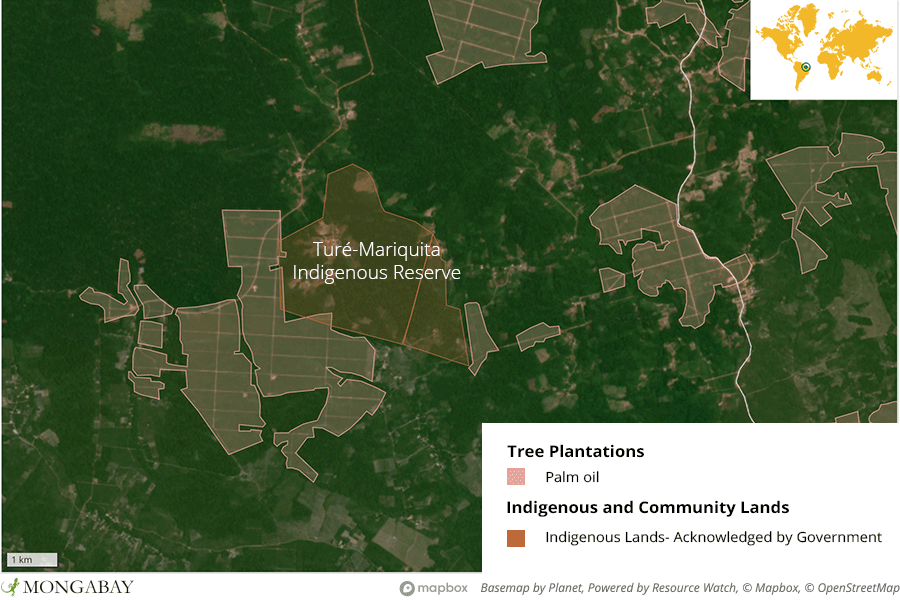 Prosecutors say that if their new bid for a forensic request is denied again, they will file a special appeal with the Superior Court of Justice (STJ), including the Mongabay investigation. Pontes Júnior explained this Friday that the Mongabay piece could not be included in the appeal filed to federal circuit court itself because it would be disregarded under the argument of “new facts.”

Silva said the MPF is also considering filing a new lawsuit against Biopalma, which will also include the Mongabay investigation as evidence. This would serve as another front in the legal push to prove the link between oil palm pesticides and damages to local communities in Pará.

As the palm oil industry expands in Brazil, the threat of water contamination has become a growing concern. When Biopalma began planting its oil palm crop in the Turé-Mariquita area in 2010, residents told us, locals started experiencing a mysterious wave of chronic, debilitating, and sometimes fatal, symptoms: headaches, itching, skin rashes and blisters, diarrhea and stomach ailments. Some of them even reported cases of cancer caused by water contamination.

These accounts of the impact of oil palm pesticides on Indigenous and traditional communities are supported by a 2017 study that found traces of three pesticides (two of them typically listed among those used in oil palm cultivation) in the major streams and wells used by the Tembé people in Turé-Mariquita.

The Mongabay team investigating the issue also experienced the rapid onset of coughing, shortness of breath, nausea and headaches after inhaling the fumes from palm trees doused with pesticides.

Besides revealing evidence of water contamination, the Mongabay investigation also shed light on the clearing of native forests for oil palm plantations, as shown by satellite imagery. This contradicts the companies’ and the government’s claims that oil palm crops are only planted on already deforested land.

The lack of a buffer zone around Indigenous reserves and water sources in oil palm production areas is also a key issue. The rights of Indigenous people and traditional communities are protected under Brazil’s Constitution and international accords to which Brazil is a signatory. The Constitution also establishes that all Brazilians have the right to an “ecologically balanced environment.”

But bylaws issued in Pará state have often trumped these commitments in practice. During Mongabay’s visit to the Turé-Mariquita reserve, we witnessed how oil palm plantations have been established within meters of the Indigenous reserves. One of Biopalma’s mills and one of its plantations lie adjacent to the Acará River and were set up without a buffer zone as is required by law, according to documents seen by Mongabay.

Karla Mendes is a staff contributing editor for Mongabay in Brazil. Find her on Twitter: @karlamendes