How can we support Indigenous communities in using their current knowledge and knowhow to improve their living standards?

Physicist and economist Cesar Hidalgo posits that knowledge and knowhow — not capital, technology, labor, or land — is the ultimate production factor that drives economic growth. Hidalgo defines knowledge as a human link to information, the ability to comprehend reality and make sense of it. He describes knowhow as the physical ability to make use of that knowledge, which is gained through experimentation, interaction and experience.

In Why Information Grows, a fascinating rethink of economic growth through the lens of physics and information theory, Hidalgo argues that for information to grow, it must be embodied in physical solids, such as products, people, organizations and networks.

From raw materials to knowhow

Instead of analyzing trade relations in terms of monetary value, Hidalgo proposes we consider the balance of knowledge exchanged. He provides the example of Chile (which exports fruits, copper, and other commodities) and South Korea (exports electronics). On paper, the monetary balance should favor the country with the surplus of raw materials, but the Republic of Korea has the higher GDP. They are exporting valuable information and the practical use of their knowledge.

I read much about how important it is to value traditional knowledge, but that knowledge tends to be treated as something to encapsulate and preserve. Hidalgo’s work made me reexamine the investment portfolios I manage in the Amazon. We are not supporting traditional peoples in turning knowledge into value for their society, or “crystallizing their imagination” as Hildalgo would put it. Investment in community enterprises has focused primarily on the export of raw materials.

Cesar De Mendes, the famous chocolatier who found wild cacao species in Yanomami territory, told me he is becoming “literate” in “mateiro” – trying to understand the knowhow of traditional communities that live in the forest. The peoples of the Amazon hold a wealth of knowledge gained over many generations of interaction with a biome we are only beginning to understand.

Renato Castro of BVRio told me the story of top Brazilian furniture designers who went to Coomflona to train woodworkers. The community craftsmen were able to perform incredible feats with the timber that left the designers in awe. And a few months ago, I saw a new report of a quilombola youth who came back to his town after attending University and developed an ointment using his grandmother’s recipe and local plant extracts. When we encourage communities to focus their efforts on reaping and selling only raw materials, are we not ignoring their most valuable assets?

In her well-known TED talk, designer and architect Neri Oxman asserts that we need to evolve from industrial manufacturing to nature-based growth. “This principle,” she says, “conceptually moves design and production into the new age of biology, from the assembly line to the wet lab.” Wouldn’t the Amazon, with its vibrant biodiversity, be the perfect lab for the new field of synthetic biology? And who holds the greatest knowledge of this powerful ecosystem?

From islands to networks

It may seem that implementing a high-tech research center in the Amazon is the path to resolve all problems – in Brazil we have the example of the Biotechnological Center in the Amazon (CBA) launched in the early 2000s, and in Ecuador, there was an endeavor to create a world class university in Yachay about 5 years ago. There are many reasons why these projects did not live up to expectations, from corruption to inability to attract talent, but they had one factor in common: they were not built upon existing knowledge and connections in the region. They became islands. Without networks, they collapsed or quickly became outdated.

Hidalgo explains that if every person sought to know everything on her own, development would cease or at best be excruciatingly slow. In modern societies, we live at a relatively high level of comfort and prosperity because we access objects embedded with other people’s knowledge.

Bigger networks allow for more storage of knowledge and are consequently more prosperous and technologically sophisticated. Our ability to weave large networks depends on the costs of establishing links among people and organizations. When links are expensive, the networks stay small.

Knowhow is embodied in networks and is often lost when social groups are isolated. Hidalgo closes his book with an example close to home, the Ford rubber concession in the Tapajós region in the early 20th century. The colony we know as Fordland was a deliberate attempt to engineer a society to help “develop” the Amazon. Fordland was an enterprise that involved the knowledge of skilled engineers and managers who had been successful at the Ford Motor Company in Michigan. Despite all effort and several attempts, it was not possible for the mighty Ford to take the knowledge embodied in a network of people living in Michigan and transfer it to the banks to the Tapajós River. Because the economy does not have the ability to codify knowhow and transfer it to a different location, networks must be built from the bottom up.

In recent decades, worldwide networks have flourished among scientists, hobbyists, and businesses. According to Hidaldo, this is primarily due to the existence of global languages and standards. This newfound ease of communication has allowed people to build better networks and make knowledge accessible and comprehensible to billions.

The lesson here is that to stimulate networks, we need to decrease the cost of transaction. One important measure is to improve standardization. A few centuries ago, measures such as the weight of the pound were not standardized and varied by a factor of four from town to town. As trade among cities increased, governments began developing standard weights and measures. An international standard for the pound was finally agreed upon in 1959.

In the Brazil nut value chain, one of the most prominent forest value chains alongside the açaí berry, there are at least six different commercial standards used for trading: can of 20 liters, can of 12 kilograms, a box, bucket, hectoliter, or barrel. In addition, humidity, temperature, and ventilation must be carefully monitored to keep Brazil nuts from developing infestations by insects and carcinogenic molds. The wide disparities in quality and standards of measurement increase the effort and time required to complete each commercial transaction in the Brazil nut value chain. To build a network, the costs of the links must be reduced.

Increasing the level of trust is fundamental to reduce the costs of links. In the Amazon, this means combating illegality in all forms, from corruption to land-grabbing, from illegal gold extraction to illegal logging.

From projects to structural mechanisms

Hidalgo points out that a major barrier to economic development is this difficulty in transferring knowledge, especially tacit knowhow which cannot be codified. I can read twenty medical textbooks and still be unable to successfully perform delicate eye surgery. We build this kind of tacit knowhow as individuals and as a society over time through experiences.

We often underestimate the amount of tacit knowhow required for communities to run their enterprises and govern their territories. We become frustrated that after 10 or 15 years, community enterprises still require philanthropic support, or even worse, fail miserably when the project ends and support is withdrawn.

Hidalgo contends it takes 22 years to become an engineer, because we acquire critical knowledge as we grow. American children, for instance, organize bake sales, collect resources for class trips, and sell ads for yearbooks. We absorb financial and business knowhow in school, from discussions with family and friends, and from movies and magazines and books.

In traditional communities, children learn skills that it would take us decades to master, but they may not have had the same exposure to business administration or accounting as American children. A series of workshops or lessons for a handful of community members will not impart a lifetime of learning. Combining existing forest skills with scientific knowledge could allow communities to crystallize their imagination, ensuring that their knowledge is not lost, but strengthened.

Communities could run their businesses without having to learn financial accounting and business management overnight. We could provide logistical support until they gain enough knowledge in these areas to be successful in the long term. This may take generations, but developing a lasting partnership values the community and their people more than would a brief influx of capital and information.

The Conexsus Institute has created a mechanism that perpetuates technical assistance and management support through government subsidized PRONAF loans. This is a step forward in the process of moving from project-based donations to developing long-term structural mechanisms. 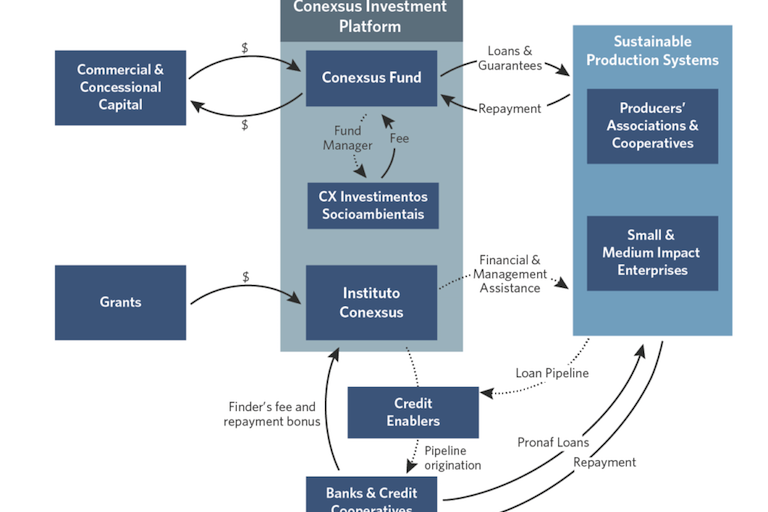 By digging deeper to discover the knowledge and knowhow held by traditional peoples, investing in building networks that allow them to benefit from this wealth, and providing long-term logistical support, we can show genuine respect for individuals and communities and see community enterprises thrive for generations to come.

Tatiana Botelho is the Program Lead for Climate and Land Use Alliance (CLUA)’s Brazil Program. CLUA is one of Mongabay’s funders, but it does not have editorial input and its relationship to Mongabay did not influence the selection of this commentary for publication.

Banner image: An Indigenous shaman of the Matses community which has catalogued its vast medical knowledge in a massive encyclopedia. Photo courtesy of Acaté.

Related listening: Acaté’s Christopher Herndon discusses how the Matses medical encyclopedia has grown to 1,000+ pages with the help of everyone from youths to shamans, click the play button here: