SARANGANI, Philippines — Half a decade ago, the curiosity of a 10-year-old boy helped ignite a love affair with birds that have swept up his village and helped bolster support for the protection of migratory raptors passing through the southern Philippines.

It all started when Joriden Ligoyligoy saw a group of strangers scanning the sky with binoculars from atop a hill in his village of Rio del Pilar, near the southernmost tip of Sarangani province on the island of Mindanao.

With the curiosity of a child’s mind, Ligoyligoy climbed the hill to find out what they were doing. To his delight, the strangers, who introduced themselves as birdwatchers, allowed him to peek through their powerful telescope and binoculars. The boy was awed to see a close-up of what he was told were raptors, or birds of prey, coming from China and Taiwan, among other countries.

With one peep through the scope, Ligoyligoy was hooked. “These migrating raptors are a sight to behold,” says Ligoyligoy, now 15 years old. “They take away my stress. I enjoyed watching these mighty birds.”

Since that day five years ago, if he’s not doing household chores or running odd errands to help support his poor family, Ligoyligoy volunteers as a watcher in the annual raptor monitoring alongside members of Raptorwatch Network Philippines and officials from the Sarangani provincial government. Ligoyligoy, who is in the ninth grade, can identify the raptors, known locally as langgam, passing through the village like they’re his best buddies, earning him the moniker the Raptor Boy of Sarangani.

Before he became the local poster boy for raptor watching, Ligoyligoy says he used to hunt birds using a slingshot in his mountainous village for fun or food. But the chance encounter with the birdwatchers shifted his mentality.

Now, in addition to appealing to his fellow youths in his neighborhood to stop hunting birds, he also rallies the community members to refrain from cutting trees in the mountains to protect the roosting sites of the migratory birds. “We need to protect these raptors because they are helpful in eradicating pests in the farms like destructive insects and rats,” Ligoyligoy tells Mongabay.

While there have been extensive studies conducted on the endangered endemic Philippine eagle (Pithecophaga jefferyi), one of the world’s largest raptors, there’s a dearth of study on the birds of prey passing through the Philippines during their seasonal migrations.

Since it began investigating the raptors’ migration routes in 2013, Raptorwatch Philippines has established five study areas along the birds’ flyways, from Luzon in the north down to Mindanao in the south.

One of those sites is Sarangani Raptor Hill at Rio del Pilar, recognized as a pit stop for migratory birds. The research site was established in 2016 by Raptorwatch Philippines in partnership with the Sarangani provincial government’s Environmental Protection and Conservation Center (ECPC). The Japanese Society for the Preservation of Birds (JSPB) and the Asian Raptor Research and Conservation Network (ARRCN) also helped in the conservation of the raptors’ flyway.

In collaboration with the Sarangani provincial government, the conservation groups have established a database of migratory raptors in Glan, the municipality in which the village of Rio del Pilar is located. Monitoring is usually done from September to October, when the birds travel south from their breeding grounds in Russia, China, Japan and Taiwan to reach the warmer climates of the Philippines and Indonesia. (In March and April, the birds make their return migration north.)

In the past five years, researchers at Sarangani Raptor Hill have documented hundreds of thousands of raptors flying south. Two mountains near the observatory station, Mount Taltak and Mount Gulo, have been identified as roosting sites for these migratory birds.

During their count this year, the ECPC spotted 111,664 raptors. The count included 109,874 Chinese sparrowhawks (Accipiter soloensis); 1,784 gray-faced buzzards (Butastur indicus); three western ospreys (Pandion haliaetus); and a crested honey buzzard (Pernis ptilorhynchus). None of these species is considered threatened on the IUCN Red List. The 2020 count was low due to bad weather stemming from the at least seven typhoons that hit the Philippines during the monitoring period, says Roy Mejorada, a veterinarian at the Sarangani ECPC. But prior to that, the numbers showed a rising trend. 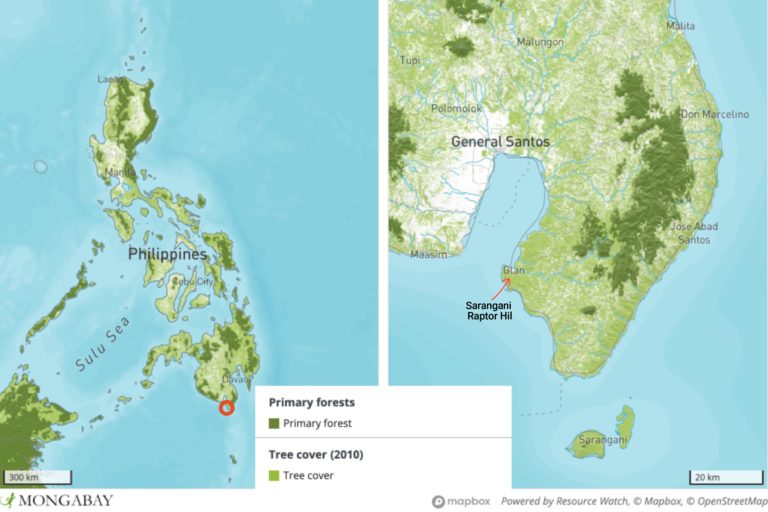 The increase in Glan’s raptor visitors could be attributed to the increase in the community’s awareness in conserving the raptors, Mejorada says. While the five-year monitoring program ended on Oct. 31, Mejorada says they are hoping to get continued or new sponsorships to sustain the study.

Tiongco says raptors are natural indicators of the health of the environment. They sit atop the food chain, thus their health depends on the health of the whole ecosystem they live in, the ARRCN said in a briefer. Declines in their populations can indicate a problem in the specific ecosystem that raptor species depend upon or visit, it added.

Raptors are also beneficial to human food security and livelihoods.

“These raptors are natural predators,” Tiongco tells Mongabay. “If their population will decrease, the population of farm pests along their migratory path will increase as a result of the disruption, affecting agricultural productivity and the livelihood of the people.”

During their initial discovery of Sarangani Raptor Hill more than five years ago, curious schoolchildren would join Tiongco and his team up on the hill. The team took the opportunity to educate the youngsters on the importance of the raptors. As the days passed, the children brought their friends and parents and spread the word to other community members, Tiongco recalled during an international webinar on raptor migration organized by Udayana University in Bali, Indonesia, on Oct. 31.

Eventually, Tiongco says, the team conducted “education caravans” involving youths and students to raise awareness about the migratory raptors and their vital role in the environment.

“Our little monitoring venture became a major town affair,” Tiongco says, noting that provincial governors and municipal mayors and their department heads lauded their initiative and some even joined raptor-watching events organized by the group.

As part of the efforts to protect the roosting sites of both the migratory raptors and resident species such as brahminy kites (Haliastur indus) and serpent eagles, Mejorada noted the ECPC, Raptorwatch Philippines, JSPB and ARRCN had launched a reforestation project in the area involving community members in 2018.

The reforestation project was designed to support the health or augment the incomes of community members, Mejorada says. That’s why they planted fruit-bearing trees such as langka (jackfruit), guyabano (soursop), marang (Artocarpus odoratissimus), santol (cotton fruit) and atis (sugar apple or sweetsop), among others.

The community members also planted hardwood species such as narra, mangium and apitong that, as part of the agreement, should not be cut down when they mature, Mejorada says.

In 2018, the USAID-funded project Protect Wildlife also conducted an education and awareness campaign for community members on the conservation of raptors.

In 2018 and 2019, the locality, which is popular among local tourists for its fine white-sand beaches, celebrated the raptor festival at Sarangani Raptor Hill.

This year’s event was canceled due to the COVID-19 pandemic, but in April 2020, the municipal government of Glan approved an ordinance declaring every September to October as “Langyaw Langgam Festival” (Raptor Festival), signaling its willingness to continue the efforts to conserve the flyway of the migratory birds.

According to the ordinance, the birds constitute a major potential ecotourism draw for the municipality, thus making it important to increase awareness and promote environmental conservation among local communities. The new law also prohibits the hunting, killing or possession of a migratory bird, and the taking or destruction of eggs or nests. Violators are subject to fines of 1,000 to 2,500 pesos ($20 to $50), community service of three to five days, or imprisonment of up to six months.

To encourage vigilance, the person reporting an alleged violation is eligible to receive 40% of the fine amount, with the rest split equally between the village and municipal governments. The ordinance also appropriates 150,000 pesos ($3,000) annually for activities or programs related to the raptor festival.

In Glan, Tiongco says hunting is not much of a problem, but convincing community members of the need to protect the migratory birds’ roosting sites is more of a challenge. “By and large, the community wasn’t aware that these raptors are from other countries until five years ago,” ECPC’s Mejorada says. “They don’t know that they are part of the migratory path of these birds.”

Part of the scheme of things

While international support is important, Tiongco says local communities must always be at the core of raptor conservation efforts because they are familiar with the flight behavior of the birds, and because these communities are the ones that will either be adversely affected or benefit from the destruction or protection of the environment.

In the village of Rio del Pilar, conservation awareness of the migratory raptors appears to have taken root among community members, including religious authorities.

Vilma Payon, a local pastor with the Philippine General Council of the Evangelical Church of God, says she reminds her flock about the need to protect the environment, including the migratory birds, during Sunday sermons.

Payon, 61, is also the grandmother of Joriden Ligoyligoy, the “raptor boy”; she says humans and other living beings suffer when the environment is destroyed or degraded. To get the message clearly and easily across to young churchgoers that they need to protect the migratory birds, she says she uses the mother-child relationship as an illustration.

She says the sermon works: the children ask their peers or even older folk to release birds they’ve captured. “Every living thing is a creation of God,” Payon tells Mongabay. “We need to protect them because they have a purpose in the scheme of things on Earth.”