Sitting in the doorway of his house, Isaac Zacharías Klassen, the patriarch of a Mennonite colony that has settled in Masisea, in Peru’s Amazonian department of Ucayali, says he was the first of his community to arrive here in 2016. He was in search of land. “We come from Bolivia,” Klassen said in an interview. “We left there because we needed more land to live.”

His wood house is built in the middle of what was once a forest. The area is now a farm, with plows parked on the vast lot. The field shines with furrows ready to plant and trees that surround the large property.

The road from the city of Masisea toward the Imiría Regional Conservation Area is flanked by similar sites. The road is wide enough for heavy machinery such as plows to pass by, operated by young people wearing clothing popular among Mennonites like Klassen: plaid shirts, pants with suspenders, and big hats.

“We bought about 2,000 hectares [5,000 acres], more or less,” Klassen said. “We sold everything there [Bolivia] to buy here.” He says it cost them about half a million dollars.

The influx of Mennonite communities into the Peruvian Amazon is not only happening in Ucayali. In Tierra Blanca, a town in the Loreto region, a large area of ​​forest has also been cleared by Mennonites. 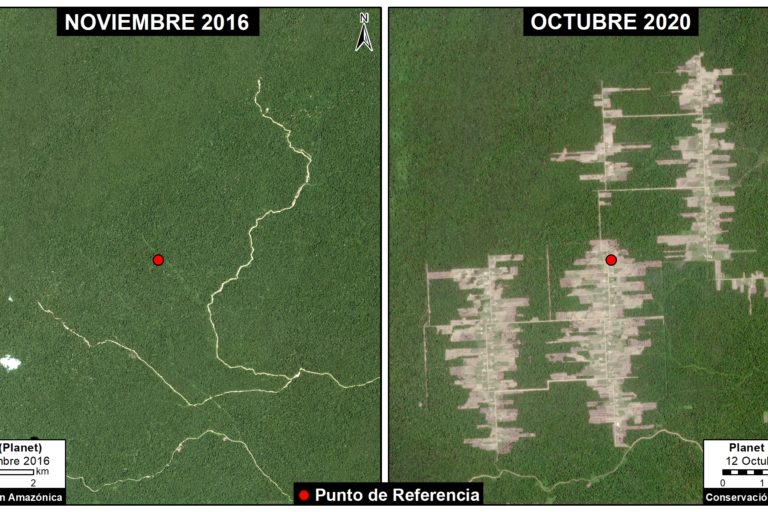 The activities of these communities have caught the attention of authorities. In late October, the Special Prosecutor’s Offices for Environmental Matters (FEMA) of Ucayali and Loreto started an investigation into deforestation in both regions. Initial information from the investigation shows that more than 2,500 hectares (6,200 acres) of forests have been razed without authorization.

“We have filed a deforestation complaint and an investigation has been opened. We have proof that before the presence of the Mennonites there was a forest and, after their arrival, these forests were converted into crops,” said Julio Guzmán, the attorney general for Peru’s Ministry of Environment. “All the rules for clearing have been breached.”

In February 2020, Guzmán presented the complaint before environmental prosecutors in Ucayali and Loreto.

A history of deforestation

Between January and November 2017, two Mennonite couples — Isaac Klassen and his wife, as well as Franz Peters Wieler and his wife — registered for ownership of titles to more than 20 rural properties acquired along the Masisea-Imiría highway in Ucayali.

Mongabay Latam reviewed 22 of these registrations, confirming that each hectare cost around $307, confirming what Klassen in 2019 said he paid for the land. The year the properties were registered also coincides with the beginning of large-scale deforestation that is now the subject of a fiscal investigation in Masisea. The loss of forest in this sector of Ucayali amounts to about 810 hectares (2,000 acres).

In Tierra Blanca the outlook is worse.

This figure is confirmed by the attorney general’s office, as the tax investigation has detected deforestation of at least 1,700 hectares (4,200 acres) in Tierra Blanca.

“It is an emblematic case of deforestation. There are thousands of hectares deforested very quickly,” said Matt Finner, MAAP principal investigator. He compares this case with that of United Cacao, a company that withdrew from the London Stock Exchange after deforestation complaints were filed in Loreto against its subsidiary, Cacao del Perú Norte.

Finer says there are very few cases of deforestation of large areas of forest and in short periods of time in the Peruvian Amazon. The case of the Mennonite communities is one of them.

MAAP’s analysis of satellite images since 1985 shows no deforestation until 2016. From 2017 onward, the images show how space have been cleared in the middle of the forest.

Klassen says the Mennonites in Tierra Blanca were the first to arrive in Peru, and that they initially settled in other localities, where “there was not much available land to continue expanding.” He said they later decided to look for new lands and thus arrived in Tierra Blanca, in the Loreto region’s Amazon forest.

Sandra Ríos, a researcher at the Institute for the Common Good, reviewed satellite images from the last 32 years in the deforested areas and confirms there was forest there until 2017. “I have reviewed every year since 1988 and not one intervention is seen until 2017. So, if there was no intervention, the change has occurred in primary forest or mature forest.”

Ríos also says these images reveal a pattern of deforestation that progresses very quickly and is marked by the use of machinery. “This deforestation is advancing at an accelerated rate,” she said.

The regional governments of Ucayali and Loreto have confirmed that the Mennonite communities do not have any authorization to clear forests.

According to a report issued by the Ucayali Regional Forest and Wildlife Management, to which Mongabay Latam had access, the territory deforested by the Mennonites of Masisea do not have any enabling title — that is, there is no record of permission for the use of this territory, a requirement under the Forest and Wildlife Law.

The regional forestry management office in Loreto confirms the same thing. In a technical report that Mongabay Latam also accessed, it is specified that in the deforested area of ​​Tierra Blanca there are 135 private properties and only 12 forest permits. The forestry authority concludes that “it cannot be said that these enabling titles have been granted to the religious Mennonite group.”

In accordance with Peru’s Forestry and Wildlife Law, the enabling titles “allow natural or legal persons access, through management plans, to the sustainable use of forest and wildlife resources and the services of forest ecosystems. and other wild vegetation ecosystems.”

The forestry law also says that in the case of private properties with forest cover, any change in land use requires the permission of the regional forestry and wildlife authority as well as a technical microzoning study.

Prosecutor Vladimir Rojas, from the Special Prosecutor’s Office for Environmental Matters of Ucayali, says the case of the Mennonite community is an emblematic one. “It affects a large sector of society, such as the Masisea district community,” he said, adding, “It involves a large group of people, because they are all immersed in the investigation.”

Guzmán, from the Ministry of Environment, says the act of unpermitted deforestation is subject to criminal charges. “In this case, as it does not have authorization, we are going to show that it is illegal deforestation,” he said.

To cut down the forest, Guzmán says, an individual must first have a forest concession or request authorization if it is a private property. “For the attorney general it is a crime, for regional governments it is an administrative offense. The regional governments should have initiated a sanctioning process,” Guzmán  said.

As of Oct. 19, an investigation is underway.

Mongabay Latam contacted a lawyer for a regional Mennonite association, David Ojanama, who says that in addition to the ongoing tax investigation, the Mennonite community is also facing a sanctioning administrative process before the Ucayali Regional Forest and Wildlife Management.

Ojanama also says that in 2017 the Mennonites applied to the forest authority for permission to change the land use for their territory, but that the request was rejected. “Like all farmers, what they did was use their land.” However, he says the area cleared was not primary or secondary forest, but an area that had already been disturbed.

Ojanama also says that since December 2019 there has been a precautionary measure in place barring the Mennonites from carrying out activities on parts of the land that have not yet been cleared. It’s an order that, according to Ojanama, they have correctly complied with, thereby ruling them out as responsible for any deforestation that occurred this year in Masisea. “On September 3 of this year, an inspection was carried out with the tax authorities and it was found that deforestation in the areas adjacent to the properties of the Mennonite neighborhood have been caused by land invaders,” Ojanama said.

Mongabay Latam could not reach a representative of the Mennonite community of Tierra Blanca due to lack of phone access in the area.

This story was first reported by Mongabay’s Latam team and published here on our Latam site on Oct. 27, 2020.