‘We are losing’: Q&A with The Orangutan Project’s Leif Cocks on saving the great ape

To some humans, the idea of treating an orangutan as a person is absurd. For Leif Cocks, spending billions of dollars to find life on Mars while living beings are driven to extinction on Earth is what is truly incomprehensible.

Cocks, the founder and president of The Orangutan Project, spoke to Mongabay ahead of International Orangutan Day on Aug. 19. From his time as a zookeeper in Perth to his years mingling with the orange-haired primates in Indonesia’s rainforests, his belief in their sentience has only deepened. In 2015, he took the stand at an Argentinian court to support treating an orangutan named Sandra  as a person. The court agreed, recognizing Sandra’s rights to life, freedom and to be kept safe from harm.

However, for Sandra’s peers in the wild, their very right to exist remains in jeopardy. All three species of orangutans — Sumatran (Pongo abelii), Bornean (P. pygmaeus) and Tapanuli (P. tapanuliensis) — are critically endangered, or just one step away from extinction. There are fewer than 800 Tapanuli orangutans in the world, found in an area about the size of Los Angeles.

Do you believe that oil palm plantations are viewed with the same skepticism by local people as they are by some Western observers?

It is probably about education and a sense of understanding. Because all monocultures are unsustainable by their very nature. Monocultures will destroy the environment that they’re in. That’s just science. They are very good at doing two things: squeezing the profit from many years into a few short years before they destroy the habitat, and reducing the profit from the many to the few.

Polyculture and agriculture, which includes mixed plantations with natural vegetation, can be sustainable, and provide maximum long-term income to the maximum number of people. We have a choice. Do we want a few people to get very rich quickly? Or do we want agriculture that supports economies that maximize sustainable profit for the maximum number of people?

You have spoken about how we are passing on the true cost of production to people who can’t afford to pay for this kind of economic activity. Why do you say that?

For example, if there’s a rainforest and the local community is making a living off the rainforest. They gain timber products, and their economy is based on the rainforest. But it’s also doing other things, what we call the environmental services. The rainforest is like a big sponge; when it rains, the water is absorbed, and when it’s not raining the water is let go. In a rainforest, you have rivers that flow year-round despite rainfall being intermittent.

You take the rainforest away, and you put a palm oil plantation there, you have a flood that destroys the village, and then you have droughts that destroy crops. It increases the temperature in the local area, which can lead to more crops failing. The rainforest harbors predators that keep pest species under control. So all these environmental services that the rainforest provided are taken away, and the profits go to the person who put the plantation there. In the big picture, destruction of rainforest causes more global warming than all the transport systems in the world combined. It’s passing a financial cost to future generations. So, what they’ve done is they have passed the true cost to the powerless.

How does The Orangutan Project protect orangutans and their habitats?

It is a multifaceted project with many partners. Our vision is to save up to eight complete ecosystems of the right type, shape and size of rainforest where orangutans can survive with the other megafauna like tigers, tapirs, monkeys and elephants, survive the extinction crisis. We are supporting companies and foundations to get the land and manage it and piece together functioning ecosystems.

We’re also working with the local communities to develop the agricultural systems that I mentioned before like dragon’s blood, a dye derived from vines that grow underneath the rainforest canopy, vanilla production and honey production. These are a couple of examples of agricultural systems that can be created under the rainforest canopy with the local communities. We have shown that within seven to 10 years, we can leave these viable, functioning ecosystems not only environmentally sustainable but economically self-sufficient. The local communities get wealthy and prosper. And there’s enough surplus money to pay for the protection and security of the ecosystem.

Is there a successful approach that you would like to highlight either from within your organization or from outside?

The first thing I have to say is simplistic solutions are great for marketing and fundraising, but they don’t really work in the real world. Let’s say we say “let’s ban palm oil.” That seems good. Like you see a rainforest, and then it disappears, and a palm oil plantation is now there. So the logical conclusion would be if we stopped palm oil, we will stop the rainforest from disappearing. But it doesn’t really address the issue. The person destroying the forest isn’t a palm oil person; he is a person seeking to make money. The trees are worth a lot of money. They’ll destroy the rainforest just for the value of the trees, and there is more than one unsustainable form of monoculture that can replace the rainforest.

So let’s say you weren’t allowed to plant palm, you can put paper on it, you could put a rubber plantation there, you can put a coconut plantation there. You may not make as much money, but it is still profitable, still worth destroying the rainforest. If you address one commodity, you’re not going to make a meaningful change because you’re not really affecting the driver.

People want me to say, “look, this community education program achieved great things,” or “the rangers have achieved great things.” But to have a meaningful impact, it’s always a lot of different things in the right dosage, with many partners putting their skills together. 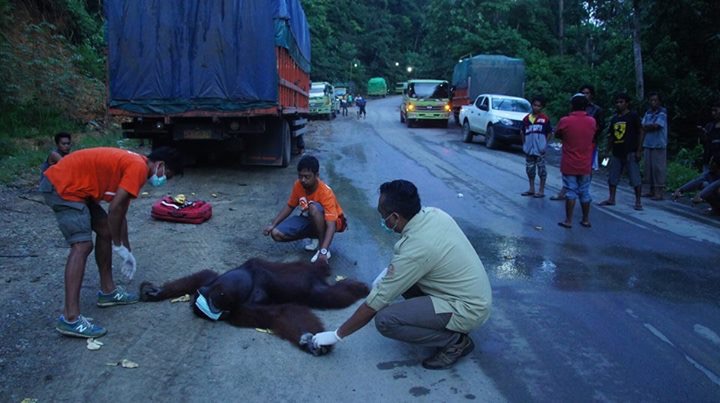 If somebody wanted to look for examples where this multisectoral approach is working, where should they look?

In general, at least for orangutans, it is hard to pick out, because we’re losing at the moment. Even the well-run projects are reducing habitat loss. So in the next 10 years, we are really in the process of having to go from reducing the rate of destruction to stopping it and expanding reforestation and protection. Some people are doing some fantastic work, but once you look into it, they’re still losing, they’re just losing less. We really haven’t turned that around.

Do you have a wish list of three things that you’d want done immediately to be able to save the orangutans and their habitats?

I think one is funding, that seems to be the most limiting factor. Not enough money to do the work. Number two is removing special interests from political decision-making. This is not unique to Indonesia and Malaysia and the orangutan world. Businesses donate and influence a government to make decisions that benefit them at the expense of decisions that may benefit the entire community or country.

The third would be developing economic systems where the true cost of production can’t be passed on to the powerless. So the costs of environmental services that are lost in rainforest destruction are paid by taxes, or given to the local community, which have lost those services.

Has COVID-19 made it more challenging to do the work you do?

In the short term, it has devastated our funding. Because as people lose their jobs and feel threatened, they are less giving. People have taken the opportunity at the moment to increase poaching, increase illegal logging. The immediate short-term effect is reducing our ability to affect change from lack of money and increasing the pressure on the forests.

The long-term effect is now unknown because there’s lots of special interest groups who are trying to make the COVID-19 recovery about benefiting a few and keeping the old status quo going. But there is also at the same time a movement for a “green recovery,” this opportunity to build a better, fairer world and a sustainable world for our grandchildren. Whether we are going to go down the dark road, increasingly right-wing, increasingly nationalist, selling off more opportunities to exploitative industries, or do we move to a fairer world and a greener world? That’s the greatest challenge of our time.