Alliance launches plan to save the planet

Healthy and productive ecosystems sustain life on Earth, but face accelerating threats from human behavior, including habitat destruction, pollution, species loss, and unsustainable resource extraction. The result is humanity is rapidly depleting the planet’s natural capital, sowing the seeds of its own demise, say scientists.

A new initiative however aims to counter that trend by fundamentally transforming food, city, energy, and production and consumption systems. The Global Commons Alliance will do this through a four-pronged approach that leverages the best science to provide actionable guidance to businesses, governments, and the general public.

“We have pushed our Earth systems to a tipping point,” said Global Environment Facility (GEF) CEO and Chairperson Naoko Ishii in remarks at the opening of the Ecosperity 2019 conference in Singapore on Thursday. “If we don’t change the path we’re on we will destroy the stable conditions that are the very foundations for our economies and societies.”

“First, start using science to measure our impact on the global commons, and set targets to reduce the impact,” she said. “Second, we must foster collective action. Only by working together to achieve the same goal of sharing our common resource do we have a chance.”

So far, more than two dozen organizations have joined the initiative. Building on the success of the Science Based Targets initiative – where over 550 companies have already committed to science-based targets to reduce their greenhouse gas emissions in line with the latest science – a group of organizations have also come together to form the Science Based Targets network. They are working to enable companies and cities to set science-based targets for operating within Earth’s planetary boundaries, including their ocean, biodiversity, land and water impacts.

Will Steffen, an Emeritus Professor at Australian National University and a Senior Fellow at the Stockholm Resilience Centre, said that without concerted action, humanity and the species with which we share the planet face a dire future.

“Recent evidence clearly shows that the integrity of Earth’s biosphere, on which we depend for critical services, is deteriorating more rapidly than ever,” Steffen said. “Extinction rates are already today well above background levels and are projected to accelerate.”

“The increasing erosion of the biosphere, coupled with a rapidly destabilizing climate system, is threatening our health and well-being, our security and our economies,” he continued. “If these trends are not rapidly halted and reversed, our children and grandchildren face a bleak future.” 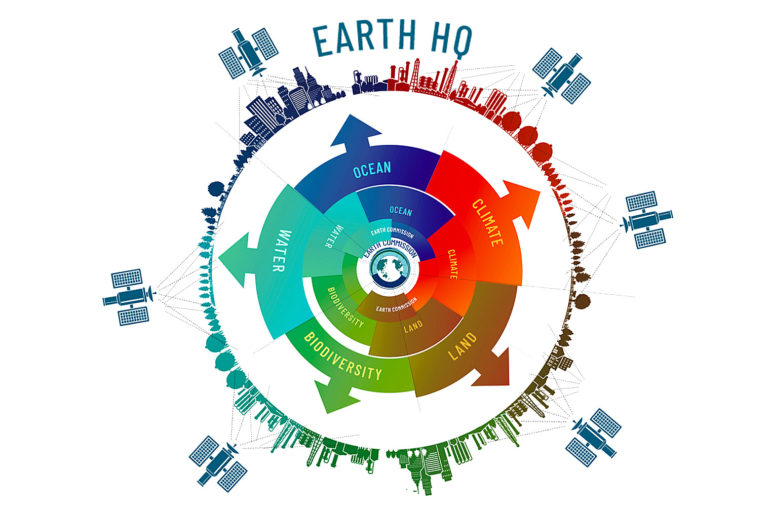 The platform will include four components. The Earth Commission is a group of 20 scientists who will develop the planetary “limits” that, if breached, could trigger catastrophic tipping points. This research will underpin the Science Based Targets Network, which is a group of international NGOs that provides actionable guidance to companies and cities. The interactions between these scientists, NGOs, and governments will led to new partnerships to drive what the Global Commons Alliance terms “Systems Change” needed to transform the fundamental nature of the global economy. To reach the public, the initiative will launch Earth HQ, “a media portal for the planet” that will serve as both a dashboard for tracking environmental indicators and communicating progress toward solutions.

“The Global Commons Alliance brings together all stakeholders under a common goal: to avoid the tragedy of the commons,” said Ishii.

Christiana Figueres, Former Executive Secretary of UNFCCC and Founding Partner of the consultancy Global Optimism Ltd., added that the time for action is now.

“Today you need to decide whether you will be part of the solution or not,” Figueres said. “We are only starting to write the history of the Anthropocene.”

“There’s no reason the Anthropocene needs to be the era of planetary destruction. It could instead be the geological era of human betterment and regeneration of natural systems. It could be the era in which we turned history around and improved the present and the future for our children and grandchildren.

CORRECTION (6/11/2019): The original version of this article wrongly stated that over 550 companies and cities had set science-based targets for climate. At this point, they have only committed to do so. We regret the error.