First the good news: A sweeping survey of the Pacific Basin has found the population of endangered green turtles (Chelonia mydas) there is increasing. However, the hawksbill turtle (Eretmochelys imbricata), the other target species of the survey, is still very much critically endangered.

In an unprecedented undertaking, a team of scientists scoured a vast swath of ocean dotted with 53 islands, atolls and reefs over a period of 13 years, clocking up to 7,300 linear kilometers (4,000 nautical miles) in an effort to generate comprehensive data about the two turtle species. They were rewarded with sightings of more than 3,400 turtles, most of them green turtles.

“The increase in densities over time is encouraging, and indicates that conservation practices can achieve results over time,” Sarah L. Becker of the Monterey Bay Aquarium in the U.S. and first author of a new paper in PLOS ONE, told Mongabay in an email.

Most turtle surveys focus on breeding sites and are able to capture female turtles and the hatchlings. However, the in-water survey was able to observe males, females, juveniles and sub-adults. 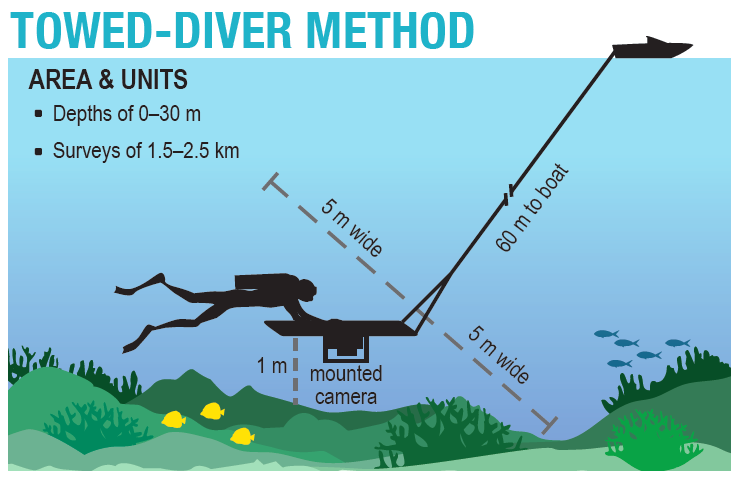 Present-day populations of both green and hawksbill turtles are only a fraction of their historical levels. Green turtles are targeted for their meat, while hawksbill turtles are captured for their shells, a heavily trafficked wildlife item. The illegal trade persists despite the species being afforded the highest level of protection under the Convention on International Trade in Endangered Species (CITES).

Their populations continue to be directly imperiled by overexploitation, fisheries bycatch, and pollution of nearshore habitats. Both turtle species are marine coral-dwelling species, and in the Pacific their range is limited to the ocean’s tropical and subtropical regions.

“Hawksbills are endangered or critically endangered throughout their range. Greens are threatened or endangered depending on location, but some populations show significant positive growth trends,” Becker said.

The in-water survey involved two SCUBA divers being towed slowly by boats at a depth of about 15 meters (50 feet) underwater. They carried mounted cameras to record the marine life in the coral habitats of four scatterings of Pacific islands under U.S. jurisdiction: American Samoa, Hawaii, the Mariana Islands, and the Pacific Remote Island Areas complex.

Over the course of more than a decade that the team studied the populations, the numbers of green turtles were either stable or increased. In the Hawaiian islands, the population density was low, but the annual growth rate of 8 percent was the highest.

“Hawksbills were observed much less frequently than greens in our study, accounting for less than 10 percent of sightings,” Becker said. “Due to these low numbers, we were not able to run the same growth trend analyses on hawksbills as we did for greens. So, we cannot speak to whether numbers are rising or declining, but our results do show that hawksbills are still extremely rare.”

The fate of the turtles is closely tied to the fates of the coral reefs. Coral reefs are extremely sensitive ecosystems that have been ravaged by overfishing, terrestrial run-off, and the warming of the oceans.

Marine species are themselves directly at high risk from rising ocean temperatures. A major Rutgers University-led study published in Nature found that twice as many marine species have perished because of global warming as terrestrial species.

The scientists drew on research on 88 sea-dwelling and 294 land-dwelling ectotherms — animals that can’t significantly regulate their body temperatures — to determine the ideal temperature conditions for them and the conditions they face during the hottest times of the year. They found that many marine species are already living at the higher end of their temperature range, and the absence of thermal refuges makes it harder for them to escape the heat.

Based on their analysis the authors concluded that tropical marine species are at the highest risk from climate change.