Hong Kong imports abalone, dubbed “white gold” after its pearly flesh, in various forms: live, frozen, canned, and dried. Previous research has shown that much of the poached abalone is traded in dried form, partly because it can be easily packed and exported in large batches, and stored for long periods without refrigeration. Dried abalone is also easier to hide among other products as it reportedly smells less pungent than fresh or frozen abalone. In fact, past seizures of poached abalone in South Africa suggest that criminal syndicates prefer to smuggle dried abalone over other forms, according to the report.

By analyzing abalone trade data, TRAFFIC researchers have found that South African abalone imports into Hong Kong have progressively increased from 3,000 tonnes in 2000 to 6,170 tonnes in 2015.

During this period, South Africa was the largest source of dried abalone to Hong Kong among other African countries. Much of these imports were illegal.

In 2015, for instance, about 65 percent of South African dried abalone shipped to Hong Kong was poached. By contrast, 33 percent was produced through legal aquaculture farms, and 2 percent was legally caught from the wild.

“Abalone is one of the most prized items in Cantonese cuisine — a must-have on celebratory banquet menus,” TRAFFIC’s Wilson Lau, author of the report, said in a statement. “Right now, in preparation for the upcoming Chinese New Year, thousands of people are buying abalone in Hong Kong. Unfortunately, if it’s dried abalone from South Africa, it may have been poached and trafficked, meaning consumers run the risk of unwittingly supporting organized crime.”

During the study period, South Africa was the leading exporter of white gold in Africa. But the TRAFFIC team noticed a distinct shift around 2007.

Between 2000 and 2007, South Africa supplied the majority (more than 60 percent) of dried abalone to Hong Kong from Africa. From 2008 to 2015, though, South Africa’s share of that trade dropped to less than 60 percent. Zimbabwe and Mozambique became important exporters from 2008, with Namibia and Zambia emerging as important sources around 2014.

This shift, the authors write, corresponds with a number of regulatory measures, such as temporary closure of wild abalone fisheries and reduced allowable abalone catch, that South Africa put in place between 2007 and 2009 to protect its abalone populations. The team thinks that instead of exporting most of the poached abalone directly from South Africa to Hong Kong, poachers are first smuggling abalone to nearby African countries, then re-exporting the product.

“In all, the shift in exporting location was rapid but impressively achieved with only a slight decrease in overall exports of dried abalone to Hong Kong between 2007 and 2008,” the report notes. “Given the additional effort required to transport stocks and possibly shift production and processing out of South Africa, it might be plausible to assume that some degree of pre-existing [criminal] networks was already in place.”

“Conventional wisdom would suggest that the more a food item is consumed, the more the consumer would be knowledgeable about what they are eating, but such a link does not appear to exist with South African abalone in Hong Kong,” Lau said. 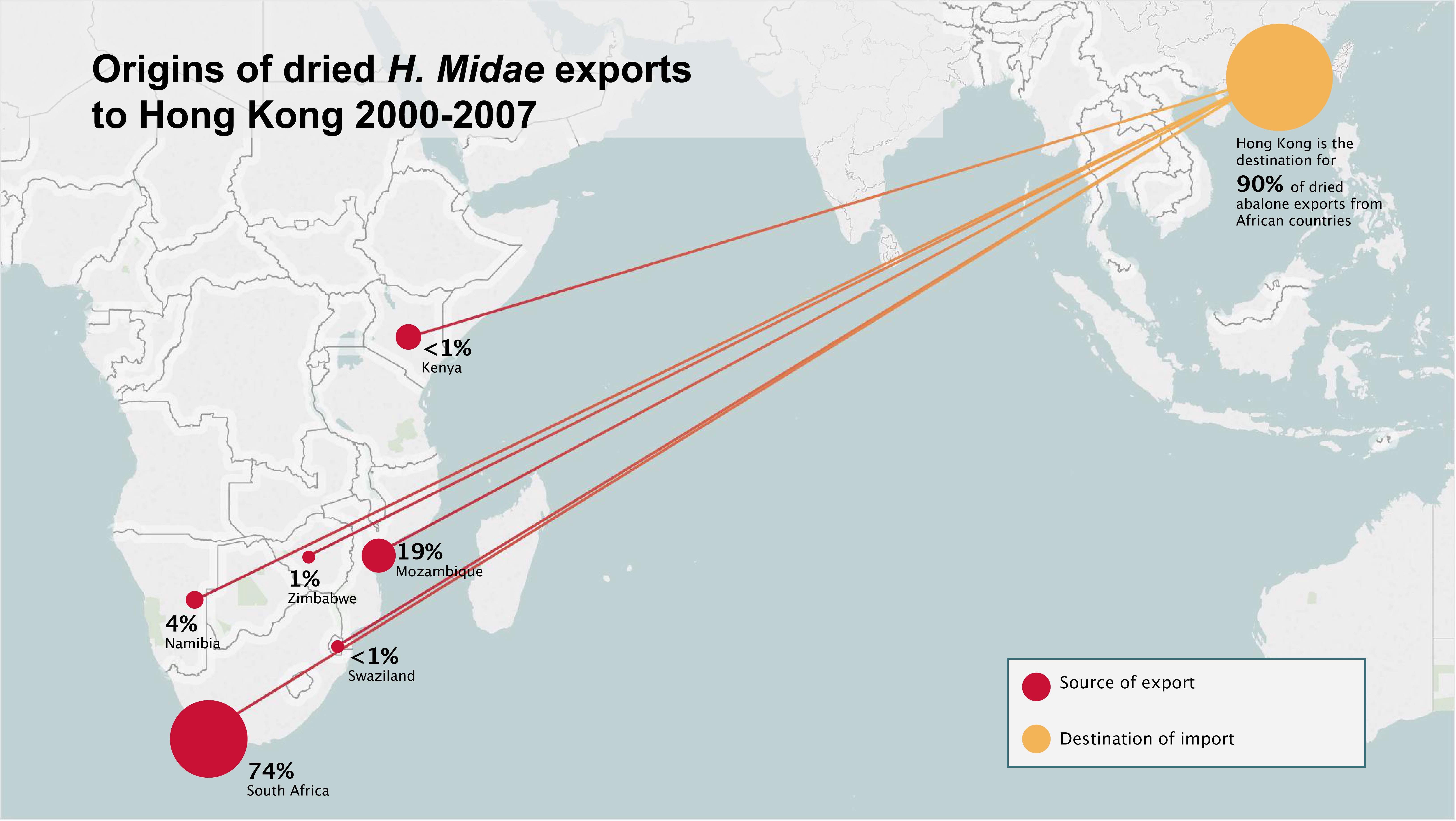