Facebook being used for illegal reptile trade in the Philippines

Facebook has emerged as a major market for trafficking in live reptiles in the Philippines, according to a new report by TRAFFIC, the wildlife trade and monitoring network.

In a survey that lasted three months in 2016, TRAFFIC researchers monitored 90 Facebook groups that had previously been known to advertize the sale of reptiles, and recorded 2,245 live reptile advertisements representing more than 5,000 individual animals from 115 taxa.

“This small snapshot reinforces how social media has taken over as the new epicentre of wildlife trade,” Serene Chng, program officer for TRAFFIC in Southeast Asia, said in a statement. “In only selected groups and in under a hundred days, we found thousands of individual reptiles in trade. This magnitude of commerce in live wild animals online is just mind boggling.”

Most advertisements were for the ball python (Python regius), a snake that is not native to the Philippines, the study found. Other reptiles among the top ten most commonly traded species included the Burmese python (Python bivittatus), leopard gecko (Eublepharis macularius), bearded dragon (Pogona vitticeps) and the African spurred tortoise (Geochelone sulcata).

In the Philippines, all reptile species are protected under the Philippine Wildlife Act of 2001, and people who want to keep reptiles as pets must have appropriate permits, the team said. More than half the species recorded in the report are also protected by the Convention on International Trade in Endangered Species of Wild Fauna and Flora (CITES).

However, only 17 advertisements explicitly mentioned the legality of the individuals they were selling, the TRAFFIC team found. Two advertisements offered permits with their reptiles. But the same traders also offered other individuals of the same species without permits at discounted rates.

“Based on the premise that traders were offering to sell some specimens with permits but not all, involving the same species, it is highly likely that they are using legal documents as a cover to fraudulently trade in animals that may have been acquired illegally,” the authors wrote in the report. 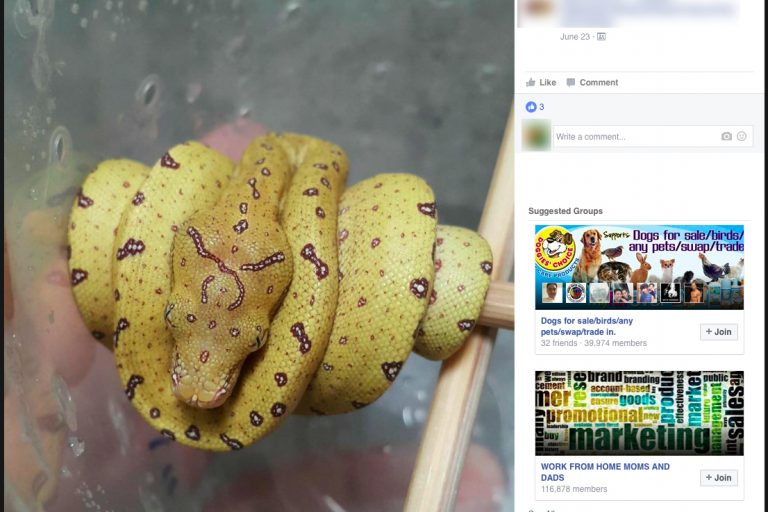 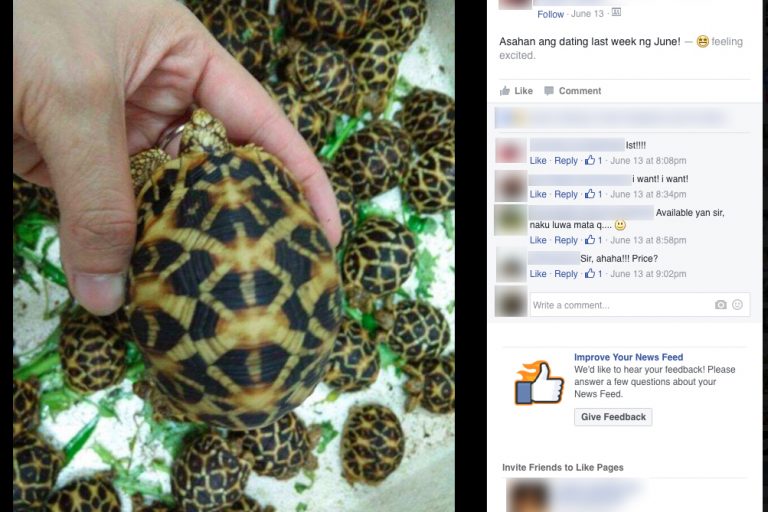 In fact, eight species being advertised in the groups were either endangered or critically endangered, such as the Philippine crocodile (Crocodylus mindorensis), the Philippine forest turtle (Siebenrockiella leytensis) and the big headed turtle (Platysternon megacephalum). According to TRAFFIC, the country’s Biodiversity Management Bureau reported to them that “it has never issued permits to collect reptiles for commercial use”. This confirms that these animals were being illegally sold online, the TRAFFIC team said.

Moreover, many traders, when asked by potential buyers whether the reptiles being offered for sale were legal, admitted that they had no permits or paper, or that the animals had been caught from the wild. The team concluded that at least 80 percent of the documented online traders they had observed on the Facebook groups “were deemed involved, knowingly or otherwise, in illegal trading activities.”

The study also found that the traders and interested buyers usually conducted their transactions through Facebook’s private messenger, often moving the conversation to their phones.

Facebook is now one of the most popular market place for live reptile trade, and tackling this trade will require continuous monitoring, and enhanced enforcement and collaboration, the team said.