TAHUAMANU PROVINCE, Peru – In June of this year, a group of scientists entered the tropical forest in Tahuamanu Province, situated in the extreme northern portion of the Madre de Dios Region, to install 72 monitoring stations. Each station included a camera trap and an audio recorder. These tools were intended to record the wildlife in the jungles of Madre de Dios for a two-month period.

Like vigilant eyes that activate at the slightest movement, day and night, the 72 camera traps and audio recorders captured data that now form part of the research study. The researchers hope to study the biodiversity of three forest concessions in Tahuamanu Province, an area that makes up 15 percent of the Peruvian Amazon.

José Luis Mena, scientific director of WWF Peru, explained to Mongabay Latam that “the majority of forest concessions in Tahuamanu have forestry certification, and the objective that we have with this project is to compare the state of biodiversity conservation in two types of concessions: certified and not certified.”

For that reason, the monitoring stations were installed in 24 certified concessions, 24 non-certified concessions and 24 “control areas,” which refers to the spaces inside the concessions that have not yet been put to use. This equipment was placed at strategic points in these three areas with the goal of registering large mammals, medium-sized mammals and flightless birds. Even though the specific results will not be known until next year, Mena says that the teams were impressed by the number of spider monkeys in the area when they set up the stations.

“What surprised me was the frequency with which we saw groups of spider monkeys in an area close to where trucks pass by,” Mena said. “These primates are an indicator of a good state of conservation, at least that there isn’t hunting, because in places with hunting, you don’t find spider monkeys. And in many parts of Madre de Dios, it isn’t easy to see these primates; you have to walk for hours and hours.”

Nelson Kroll moved to Madre de Dios 15 years ago, attracted by the idea of living in the Amazon. Three years later, he started working in the Maderacre forest concession, located in the Iñapari District in Tahuamanu Province. The Maderacre forest concession is one of the country’s largest forest management units. The concession, which spans more than 220,000 hectares, is one of the spaces in which the team of investigators installed monitoring stations.

Maderacre has been a part of the group of certified forest concessions since 2007. Kroll says that they decided to take this step in order to give credit to a responsible management team that is dedicated to the forest’s sustainability.

However, attaining certification requires commitment, according to Mena. “The certification is an acknowledgement, an initiative that seeks to raise the standards of forest activity, so it has a series of recommendations that the licensees include, and in the particular case of fauna, it includes, for example, the prohibition of hunting,” Mena said. “A concession with the FSC [Forest Stewardship Council] doesn’t practice hunting; they get their food from the city, and you can be certain that you can go to a place where you can see wildlife.”

Kroll, who confirmed that his company’s certification is based on the principles and criteria of the FSC, added that their use of forest resources “is selective and of reduced impact, which means that all the labor is carried out with the goal of the protection of the workers and the reduction of the impacts on vegetation, wildlife, and the physical environment in general.”

The importance of evaluating spaces like this, Mena said, lies in the need to confirm the effectiveness of certain conservation initiatives.

“Many times it’s assumed that conservation initiatives themselves are good, but we need hard data to show that they really are,” he said. He explained that their hypothesis is that forest concessions that are certified should hold a “greater number of species or have a community that would indicate to us a higher level of conservation than the others, those that do not have FSC [certification].”

The camera traps and audio recorders sat in the forest until September of this year, when the group of scientists returned to the concessions in Tahuamanu to retrieve them. This was one of the most exciting moments of the investigation, Mena said, because they didn’t know what they would find until they checked the footage. Now, after viewing the data, they can confirm the presence of species such as jaguars (Panthera onca), ocelots (Leopardus pardalis), pumas (Puma concolor), jaguarundis (Puma yaguarundi), South American tapirs (Tapirus terrestris), red deer (Mazama americana), tufted capuchins (Sapajus apella) and bush dogs (Spheotus venaticus).

The researchers started their investigation two years ago in 2015 with the launch of a study of small mammals in two forest concessions, which registered 27 species. The information collected will also be included in a publication that will be released in the next few months. One of the reasons for its development was to implement different data collection techniques, which the scientists say will help refine the methodology used in Tahuamanu.

This project allowed the team to realize the necessity of adding audio recording in addition to the camera traps.

recorders, we’re focusing on two things: one is the diversity of insectivorous birds, as an indicator of the state of the forest’s health, and something called ‘soundscape,’ as an indicator in terms of conservation,” Mena said.

The soundscape allows the characterization of a space in terms of biodiversity; as long as the vocal register of the species is larger, it can be said that an area is in a good state of conservation. Places that have been “disturbed” tend to be those that “have lost some components of species diversity,” and a modification of the soundscape would be expected.

Another investigation being launched, which is more ambitious on a methodological level, is the estimation of the jaguar population in Tahuamanu Province. This is a prioritized species in terms of conservation for the WWF, whether it be in protected areas like forest concessions or in indigenous territories.

When the WWF team installed the 72 monitoring stations to study the biodiversity within the forest concessions, it chose to install 58 double stations, in collaboration with the San Diego Zoo. The stations were set up along “the forest roads, because jaguars really like to travel on the roads and those are the places where you can have a better chance of photographing and registering them.”

The stations are doubled in order to photograph both the left and right sides of the animal, since the only way to identify individual jaguars is by their spots. The spots are distinct on each jaguar, just like fingerprints.

“That identification of the individuals is the basis for estimating the population of jaguars in the area. We’re talking about 1,000 square kilometers just to study the jaguar,” said Mena, who confirmed that there were a total of 116 camera traps installed. 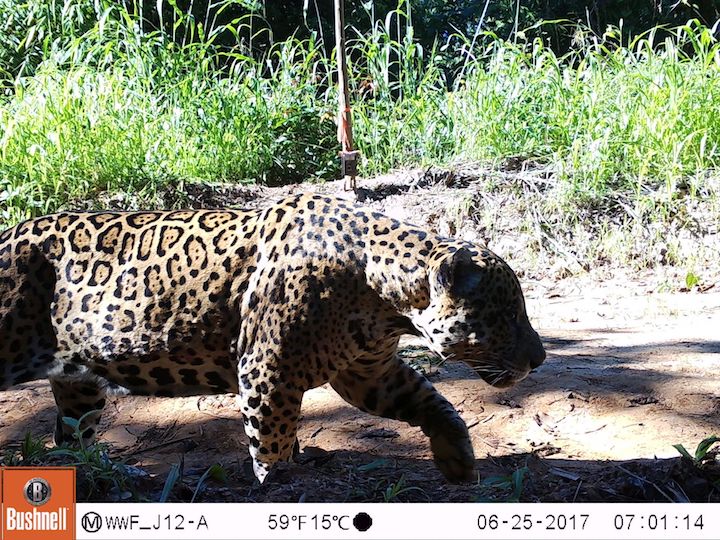 In total, the camera traps installed to monitor the jaguar population in Tahuamanu Province have recorded more than 85,000 hours of video. The videos, which are being analyzed, will allow researchers to determine the number of jaguars in forest concessions in the province in the next few months.

This story was reported by Mongabay Latam and was first published in Spanish on November 14, 2017. Camera trap videos courtesy of WWF Peru