Indigenous groups pressured to give up lands for doubtful Nicaragua Canal

The only people watching over Nicaragua Canal land use negotiations between Nicaragua’s government and indigenous leaders have been masked policemen, according to indigenous reports. No international observers have been present.

The meetings, which the Nicaraguan government sprang on surprised community leaders several times over the past few months, are aimed at securing consent to use indigenous territory for the planned US $50 billion 175-mile trans-oceanic canal that would bisect Nicaragua. Community leaders say that the government has not allowed them legal council in the meetings, violating international regulations.

“They keep saying that we don’t need a legal advisor,” Allen Claire-Duncan, the leader of the Monkey Point Kriol community, told Mongabay. “Many people do not know how to read or write, and if the [government negotiators] come to the community they will speak in terms that the people don’t understand. [The government does] not want to do these meetings the right way.” 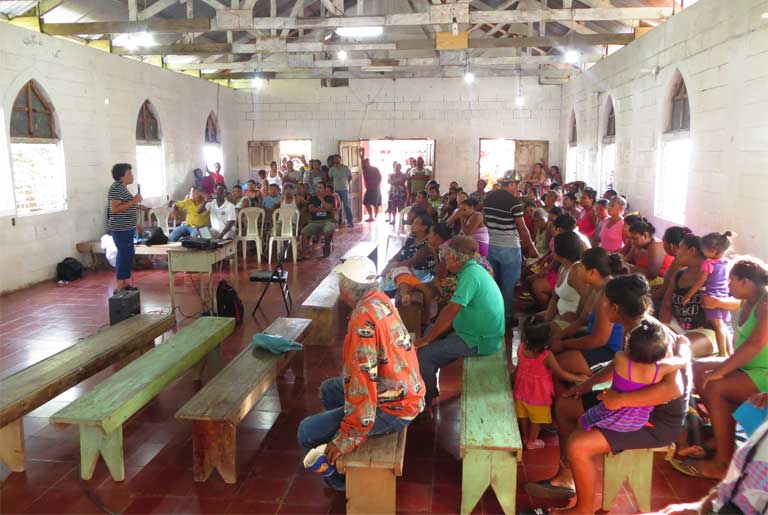 Claire-Duncan is the leader of one of nine indigenous and Afro-Caribbean communities in Nicaragua’s East. While officials from Hong Kong Nicaragua Canal Development Group (HKND), the Chinese company building the canal, say only 25 indigenous households will be relocated for the canal’s construction, indigenous groups disagree. They say that the planned route will displace the entire communities of Bangkukuk Taik, Monkey Point and Wiringay, while most other local communities will be indirectly affected by canal support projects. Bangkukuk Taik is the last place where the Rama indigenous language is still spoken. Officials estimate that between 30,000 and 120,000 people will be displaced in total by the canal.

The state granted land titles to the local indigenous communities in 2009, and according to both Nicaraguan and international law, the Nicaraguan government must obtain consent from the nine community leaders as well as the 18 members of the Rama-Kriol Territorial Government (GTR-K) before construction can begin.

Though indigenous leaders deny having been consulted, both HKND and government spokesmen are reporting otherwise: they’ve told Nicaraguan media that they’ve obtained the permission required from the indigenous groups to begin building the canal. Neither the government nor HKND has made these documents public, nor have they responded to queries for this article.

Community leaders are emphatic about their desire not to sign over their lands, but some leaders say they have been pressured into signing documents of an uncertain nature. Others say they were promised rewards — money or lavish, all-expense paid trips to Managua — if they would sign papers. 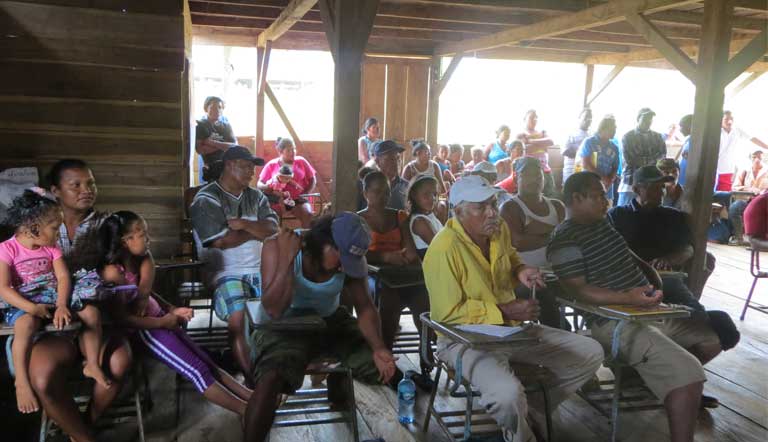 Though leaders say they have signed documents several times in the past, they claim that they were told by authorities that the papers simply authorized future meetings — not consent to use indigenous lands for the canal. The actual intent of the documents remains murky, however, as the community leaders were not allowed to make copies and the government has not made them public.

“Ninety percent of the people here don’t have a notion of what the document means,” Santiago Thomas, a Rama indigenous leader, said in January after a meeting where several leaders were forced to sign. “We tried to get [copies of] the document to analyze it, but then the government told the people that there was no need to.”

After this surprise January meeting, some community leaders signed an internal agreement saying that they would not sign any government documents until they were given legal council and until international observers were present.

But in May, government officials transferred 16 members of the GTR-K to Managua where they signed more papers.

Shortly after the meeting, Nicaraguan state media reported that the indigenous territories had officially granted consent for the canal. “After two years of conversations we have culminated this historic process of free and informed consent,” said Héctor Thomas, the president of the GTR-K, who was among the signatories. Thomas told the state-run newspaper La Jornada. “We’ve now found the necessary things to give our consent.”

Thomas later contradicted his previous statement when he told Nicaraguan newspaper La Prensa that the document did not turn over indigenous territory, but simply affirmed that the GTR-K had been consulted. Thomas declined to comment when reached by phone by Mongabay.

According to a press release signed by Claire-Duncan and several other community leaders, some of the 16 document signatories were not official members of the GTR-K, and several important community members were not even informed of the trip to Managua. Responding to the meeting, several community leaders filed a cease and desist order with a local court, They also reported the incident to the Inter-American Court of Human Rights where they already have filed a lawsuit alleging that the government has violated their indigenous right to self-determination.

“These things that are happening now will keep happening unless they pass this [cease and desist order],” Claire-Duncan said. But “The courts, they are not saying anything.”

The indigenous leaders are not the first to accuse HKND and the Nicaraguan government of a lack of transparency. While the baseline studies conducted in the Environmental and Social Impact Assessment were made public months ago, HKND has not put its environmental mitigation plans up for public review as required. The Chinese firm has also not released a list of financial backers, a construction timeline or made public its plan to relocate the tens of thousands of people who will be displaced by the canal.

Corporate and governmental secrecy have prompted concern from human rights organizations, environmental groups and the U.S. Embassy in Nicaragua.

“The embassy is worried by the lack of information and transparency that has existed, and continues to exist, over many of the important aspects of this project,” US Embassy officials wrote in a statement last January.

Though Nicaraguan officials say they still expect the canal to be completed by 2020, the shroud of mystery that hangs over the project has prevented HKND from quashing rumors that the project may never happen.

Economists have questioned where the US $50 billion to build the canal will come from, and whether or not shipping traffic is sufficient to compete with the nearby Panama Canal, while scientists have cast doubt on whether or not there is even enough water available for the canal to operate.

Construction has stalled. Despite a groundbreaking ceremony in December 2014, only a few small access roads have been built. Construction has been postponed to an undesignated date this fall, and awaits completion of further HKND feasibility studies.

“Some of the most fundamental things like financing are still unclear. People are doubtful about [whether the canal will happen] and still consider it to be a very non-transparent operation,” said Margaret Myers, the director of the China and Latin America Program at Inter-American Dialogue, a Washington-based policy institute.

The lack of government and HKND transparency has left local people within the area the canal is to be built with uncertainty and many questions: what do the signed documents say? How will indigenous groups be compensated for the loss of their lands to the canal should it be built? And what will happen to indigenous community lands if the canal is never built?