Highly anticipated data from the Food and Agriculture Organization of the United Nations (FAO) shows that global forest loss has slowed significantly over the past five years relative to the 1990s and 2000s.

The report, released Monday at the World Forestry Congress in Durban, is based on data provided to FAO by 234 countries and territories. Unlike other recent analyses, the Global Forest Resources Assessment 2015 relies primarily on self-reported data, rather than satellite data, providing a different view on trends in forest cover and management.

Net forest loss between 1990 and 2015 amounted to 129 million hectares, or an area roughly the size of South Africa. Yet net loss — which includes forest loss offset by forest recovery and establishment of plantations — also slowed significantly over the 25-year-period, from 0.18 percent per year in the 1990s to 0.08 percent. Annual net forest loss averaged 3.3 million hectares from 2010-2015.

But focusing on net forest loss can obscure the impacts of trends on biodiversity and ecosystem services. Accordingly, FAO also captured data on primary forests, when countries are willing and able to provide it. The assessment shows that primary forests currently account for just over a third of global forest cover, but are declining rapidly, especially in the tropics, which lost more than ten percent of primary forest cover over the past 25 years, among countries that regularly report on that metric. 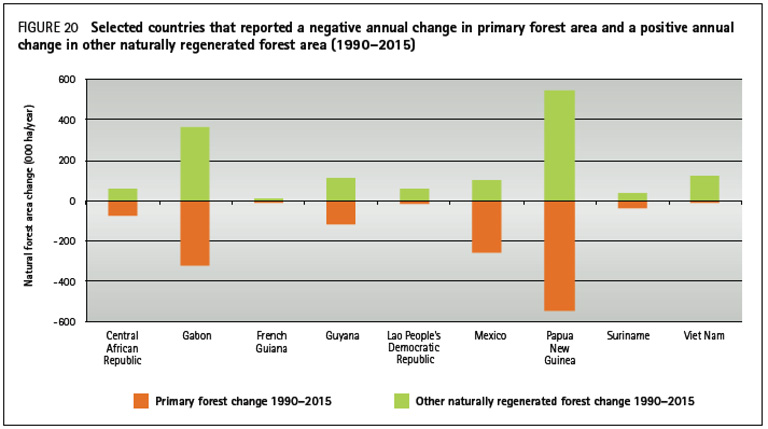 At the opposite end of the spectrum, in terms of ecological function and trendlines, are planted forests which continued to expand and now represent seven percent of tree cover worldwide. But FAO data suggests that plantation expansion has slowed considerably since peaking in the 2000s when an average of 5.2 million ha where planted a year. Over the past five years, only 3.1 million ha were established annually, a decline of about 40 percent.

The Global Forest Resources Assessment goes well beyond these areas, capturing a wealth of other data, including information on forest carbon stocks, timber certification, and the contributions of forestry to local and regional economies. A series of studies based on the data was also published this week in a special issue of Forest Ecology and Management. FAO further published a forest profile for each of the 234 countries and territories presented in the assessment. 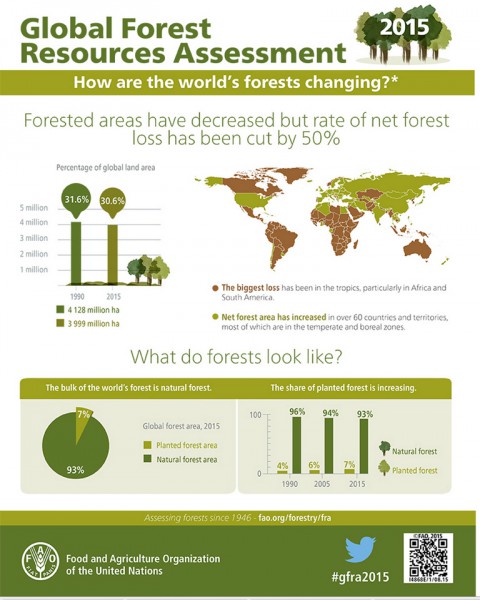 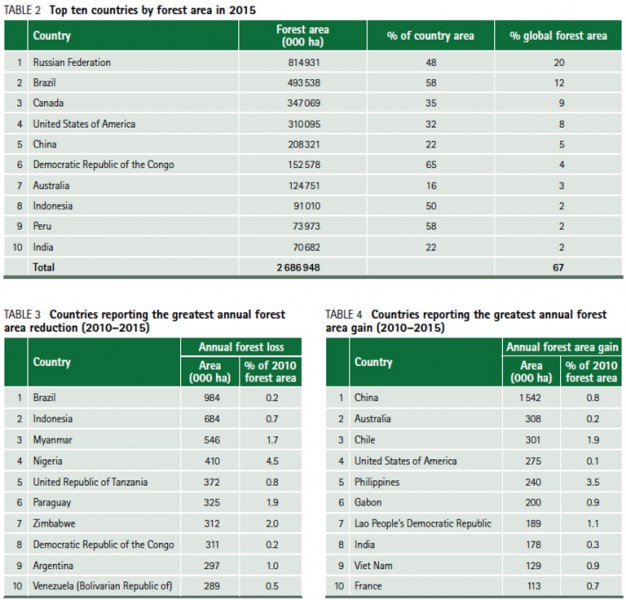 FAO’s report comes on the heels of data released last week on Global Forest Watch, a platform for tracking trends in forest cover. That data, compiled by researchers at the University of Maryland and Google, focuses on gross changes in forest cover on an annual basis. Unlike FAO data, which is only published every five years, the Global Forest Watch data does not distinguish between natural forests, primary forests, or timber plantations, although the platform includes layers that enable users to filter areas in some countries by different types of forest use.