Global forest loss amounted to 18.7 million hectares (46 million acres) in 2014, a decline of about 9 percent relative to 2013 and 20 percent compared to 2012, according to data released today by a team of researchers from the University of Maryland and Google.

The much-anticipated data, published this morning on Global Forest Watch, a platform for mapping ‘big data’ related to forests, reflects changes in tree cover, including deforestation, harvesting of tree plantations, fire damage, and forest die-off from disease and pests. It will be used by analysts, policymakers, conservationists, and others to track progress — or lack there of — on efforts to conserve forests ahead of November climate talks in Paris, where forests are expected to play a major role in the development of an emissions mitigation framework.

The data, which does not include forest gain including reforestation and forest recovery, reveals some interesting trends including persistently high forest loss in boreal regions — where most forest loss is linked to logging, fires, and beetle outbreaks — and the tropics, which is dominated by outright deforestation, typically for pasture, agriculture, or plantations. Among the planet’s biomes, the tropics accounted for the largest share of loss at 10 million hectares in 2014. 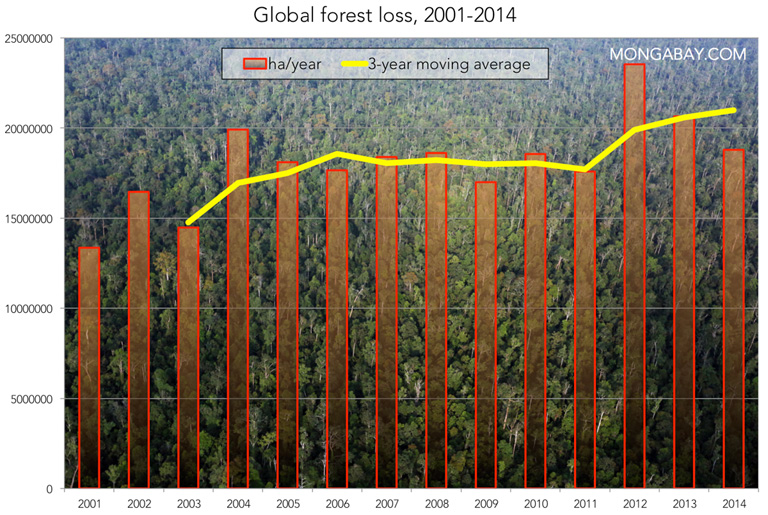 The usual suspects topped the 2014 list: Russia, Brazil, Canada, Indonesia and the United States. But coming in at number six was the Democratic Republic of the Congo, which surpassed a million hectares of forest loss for the only time in the 14-year data set. Annual forest loss in the Central African nation has roughly doubled since the early 2000s, according to the data. 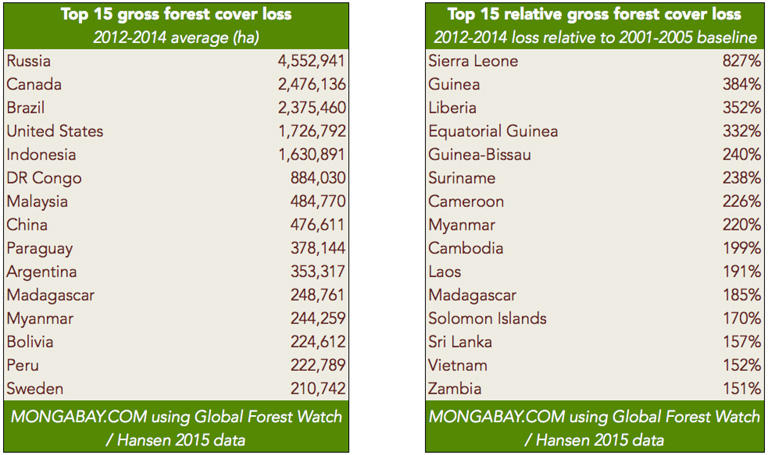 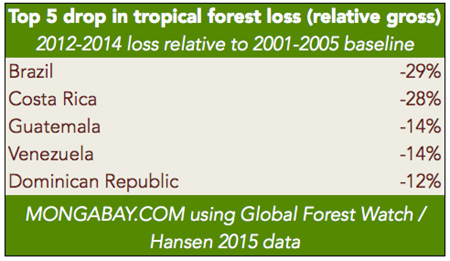 In a blog post on World Resources Institute’s site, the researchers pointed out some other notable hotspots, including spikes in forest loss in the Mekong region, especially Cambodia, for rubber plantations; the Gran Chaco in Paraguay, Argentina and Bolivia for cattle and soy production; and West Africa, the Congo Basin and Madagascar for small-scale agriculture, industrial oil palm plantations, and logging. They note that Madagascar — a country that doesn’t have much forest left to lose — lost almost two percent of its total forest cover in 2014.

“This analysis identifies a truly alarming surge in forest loss in previously overlooked hotspots,” said Sizer in a statement. “In many of these countries, we’re seeing accelerating clearing associated with commodities such as rubber, beef, and soy, along with palm oil. To slow this forest loss, we need improved forest governance to prevent illegal clearing, more balanced land use planning, and greater demand from major importers and trading countries for sustainable commodity production.”

Global Forest Watch is supporting those goals by radically improving transparency around forests, which is fostering greater accountability in the forestry sector. Planned features — including more accurate and timely data, incorporation of tree cover gain, and better analysis of tree cover dynamics that could distinguish between deforestation and other types of forest cover change — will make it ever more difficult to carry on with business-as-usual approaches that are decimating global forests.

“Data can help,” write the blog authors, including Sizer, WRI’s Rachael Petersen, the University of Maryland’s Matt Hansen and Peter Potapov, and Google’s David Thau. “As the world of forest information gets richer, everyone from government officials to researchers to everyday citizens can get more involved helping monitor and manage our forest resources.”