The open-air truck braked to a halt and we jumped down, rushing out onto the road. Our guide beckoned us to move quickly, but quietly. In the dense canopy of the Sumatran jungle, a large male ape boomed, it’s urgent hooting almost deafening.

The smaller female and juvenile had already fled the approach of our vehicle, but the male stayed back to distract us – according to our guide – as the others fled to safety. We rushed into the pathless forest, crashing through a tangle of jabbing, slashing, spiny branches, struggling with cameras and binoculars.

We stopped and tilted our gaze up, way up.

The giant gibbon – the siamang – peered down at us, still howling. His massive throat-sac bulged. We watched for several minutes as he used long, lean and super-strong arms to fling himself through the canopy with athletic abandon, stopping periodically to shake the branches and stare down at us with a steely gaze that said, “Yes, I see you, intruders – and I’m not afraid.”

We didn’t stay long, not wanting to disrupt family life in the treetops. Nor did we glimpse siamangs again on our explorations of Way Kambas National Park, though we heard them every morning as we headed into the jungle. Their dawn songs boomed around us like a wild orchestra. It’s a sound I’ll never forget. And I’m not alone.

Tim O’Brien, a senior scientist and primatologist with the Wildlife Conservation Society, recalled that it was the siamang’s “amazingly beautiful morning chorus” that first “hooked” him on the species.

Susan Lappan, an anthropologist with Appalachian State University, explained that these “mesmerizing songs” are usually a duet between male and female partners “woven together into an elaborate vocal display, and to their acrobatic movement through the trees.” Researchers believe that gibbons, like the siamangs, sing to mark their territory, fortify family bonds, protect the best fruiting trees and advertise for a mate – reasons to howl with which humans can mostly relate.

Gibbons’ talent for exotic music – with vocal tones ranging from haunting Japanese flute to blaring police siren – along with amazing gymnastic abilities, have caused this primate family to be dubbed the “singing, swinging apes,” according to Lappan.

But all that virtuosity has not brought siamangs, and other gibbons species, to the world’s attention. They’ve been largely ignored by conservationists, scientists and the global public – at least when compared to the great apes, tigers, elephants and rhinos, even as they face many of the same perils as these other big Asian mammals.

Today, siamangs are listed as Endangered by the IUCN Red List.

The majority of the world’s remaining siamangs are found in Sumatra. There is an additional population on Mainland Asia in peninsular Malaysia and Thailand. There is still debate about whether these two populations (the Sumatran and mainland one) represent separate subspecies.

Siamangs aren’t alone in being threatened. Of the sixteen gibbons recognized by the IUCN Red List, one is considered Vulnerable, eleven Endangered and four Critically Endangered. Not a single gibbon species is thought safe and some are on the precipice of extinction.

Siamangs might best be described as giant gibbons. At their largest they can be 1 meter (3.3 feet) tall and weigh 14 kilograms (31 pounds) – twice the size of other gibbon species, though still small compared to the world’s great apes, such as orangutans and chimpanzees. Siamangs reside in the gibbon family of Hylobatidae, but are distinct enough from their relatives to claim their own genus, Symphalangus.

Not only do they differ in size; they are also the only gibbon to sport an inflating throat sac – called a gular – similar to that of a frigatebird, sage grouse or frog. When fully inflated with air, the siamang’s sac may be larger than its head, giving its song a bagpipe-like boost that significantly increases both its volume and range.

Siamangs don’t just differ from other gibbons physically. One of the things that drew Lappan to them was their distinct parenting style.

“Siamangs are the only gibbon species in which males are heavily involved in infant care,” she said, noting that male siamangs usually start caring for their infants when they turn one year old. “Young siamangs generally start sharing a sleeping spot with the male, rather than with their mothers, when a younger sibling is born, and some juveniles continue to share a sleeping site with the male until they are 4 to 5 years old.”

While monogamous pairs and juveniles are the norm, O’Brien says there are also siamang groups that are polyandrous, where several males share a single female.

Like all other gibbons, siamangs are arboreal acrobats, performing gymnastic wonders in the tropical canopy with ease – a form of movement called brachiating by scientists. In a dazzling display, they often coordinate their swinging with their songs.

Siamangs also play a vital role in their rainforest homes as seed disperers.

Lappan points to research by Mohamad Rusmanto, noting that siamangs defecate some seeds “whole and undamaged hundreds of meters away from the parent plant.” Put simply, “siamangs help some of their favorite food trees to reproduce. If siamangs are removed from a forest, these seed dispersal services will be lost, likely leading to the degradation of the forest in the long term.”

Despite their ecological importance, Siamangs and other gibbons have received little conservation and research attention. When Sumatran wildlife is discussed, it almost invariably revolves around just four species: Sumatran orangutans, elephants, tigers or rhinos. Siamangs and the island’s other two gibbon species go mostly unmentioned.

Lappan suggests that this disregard may come partly from Western society’s long familiarity with the bigger species.

“Rhinos, tigers and elephants have been familiar to the English-speaking world for many decades, largely due to stories originating in Africa or south Asia,” she said. “Prior to the first long-term field study of siamangs in the 1970s, almost nothing was known about [gibbon] behavior or ecology.”

Perhaps one of the biggest – but unconscious – reasons why siamangs and gibbons have been overlooked is their unfortunate designation as being the “lesser apes.”

“How is that for a moniker?” said O’Brien.

According to Lappan, gibbons were originally given the name “to indicate their small body size relative to their ‘great’ ape cousins,” not due to their lesser importance.

Unfortunately the label may have made these animals seem less charismatic, less interesting and simply less appealing than the so-called ‘great’ apes. A similar fate seems to have befallen many of the world’s medium and small wild cats — such as the Central American margay or the African golden cat – species long ignored by conservationists and researchers; even as these animals, like the lesser apes, drift from secure to endangered.

Little is known about the state of siamang populations today. Scientists have largely focused on siamang behavior, song or locomotion, while only a few studies have looked at the threats and status of these giant gibbons. In Sumatra, for example, conservationists can give a pretty good estimate of the remaining numbers of tigers, rhinos or elephants, but the IUCN doesn’t even provide a rough estimate of total siamang numbers.

Far less is known about mainland Asia siamang populations, Lappan said, “But most of the Malay peninsula has been deforested, so there is cause for great concern about the status of the siamang in Malaysia and southern Thailand.”

Siamang numbers are dropping rapidly. According to the IUCN, “there is reason to believe the species has declined by at least 50% over the past 40 years (three generations) due primarily to hunting for the pet trade and continued rates of habitat loss.” And this assessment – the most recent – was made seven years ago. The region has lost a lot of forest since then.

The siamang is unlucky to live in two countries with some of the highest, fastest deforestation rates on the planet. Indonesia has recently been implicated as the world’s biggest deforester – even eclipsing Brazil, which has way more forest to lose – while Malaysia has the world’s highest rate of forest loss. Worse still, the island of Sumatra is the epicenter of forest loss in Asia. Sumatra has lost about 85% of its forest in the last 50 years. And the destruction continues.

By 2008, the siamang lost 70-80 percent of its primary habitat across its range – including Indonesia, Malaysia and Thailand – again, according to IUCN.

The only good news is that siamangs appear more adaptable to habitat loss than many other rainforest species, including other gibbons. Siamangs have been found surviving in secondary forests, though at smaller densities than in primary rainforest. Scientists don’t believe they can, however, survive in a monoculture, such as the palm oil, coffee and paper plantations that have rapidly replaced forest across their range in recent decades.

“Siamang and other gibbons live in the treetops and require connected tree canopies to move through their ranges,” explained O’Brien. “As forests are cut, remaining patches become isolated and often are too small to support a viable population of siamang.”

Siamangs face an additional threat, which many other Sumatran species don’t: the illegal pet trade. According to a 2009 report on gibbon trafficking, siamangs rarely showed up openly in Sumatran markets, but can be acquired behind closed doors.

“Dealers in the markets alleged that they could arrange sales of large mammals such as orangutan, siamang, Sumatran tigers, sun bears… and others upon request,” reads the report. It further notes that siamangs are popular pets among civil servants and military officers both in Sumatra and Java, which has no native siamang populations. On Java, siamangs were “among the most common primate traded on the island.” The report also revealed that Indonesian and mainland Asia zoos likely depend on such trafficking for their captive gibbons.

Lappan said that hunting for the pet trade “usually involves killing the mother to capture her infant.”

One organization working to stop this illegal trade in Indonesia is Kalaweit. Focused on gibbons, Kalaweit helps rehabilitate the apes at locations in Sumatra, Java and Borneo. Unfortunately, most rescued gibbons can’t be returned to the wild due to having contracted human diseases. But rescued gibbons are properly cared for, and sometimes individuals can be returned to their forest homes. 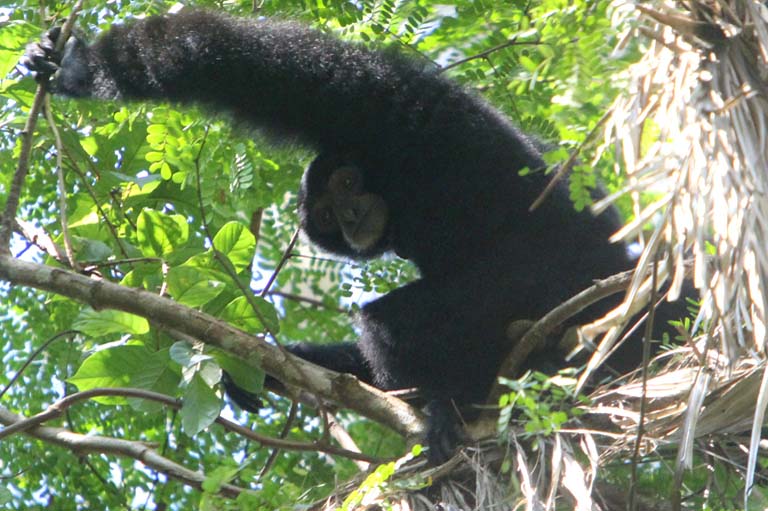 Still facing a triple punch of unprecedented deforestation, the illegal pet trade and a tragically-low profile, siamangs could be the next large mammal in Southeast Asia to end up as Critically Endangered. For those who have had the pleasure to see and hear these giant gibbons, that would be a profound failure, as would be the loss of the magnificent forests which they inhabit.

“They are simply marvelous creatures, and I feel incredibly privileged to have had the opportunity to spend so much time with them,” said Lappan.