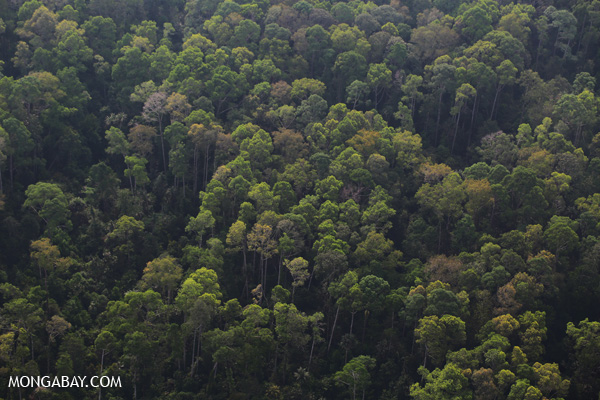 An aerial view of rainforest in Indonesia’s Riau province. Photo: Rhett A. Butler

Indonesia’s Environment and Forestry Ministry might upgrade the partial logging moratorium from a presidential instruction to a government regulation, or PP, later this year, a ministry official said this week.

The change would take place after the ministry completes its semiannual revision of the moratorium map for the ninth time in November, said ministry official Ruandha Agung Sugardiman, according to The Jakarta Post.

The moratorium, introduced in 2011 under an agreement with Norway, was extended in May, although environmentalists had demanded it be strengthened.

“Because it is just an extension, [we] could not insert new articles. If we included new articles, then the name [of the moratorium] would change, it would not be an extension,” Ruandha told the Post.

The moratorium bans new industrial concessions in primary forest and on peatland but exempts secondary forest and existing concessions and makes exeptions for “national development” projects – geothermal, oil and gas, electricity, rice, sugarcane – as well as any concession the Environment and Forestry Ministry chooses to allow.

Environmental groups had wanted the president to do away with those exceptions and bring all forest and peatland under the moratorium’s protection.

According to a recent study by the Center for Global Development (CGD) and the World Resources Institute (WRI), the moratorium has reduced Indonesia’s greenhouse gas emissions from forest clearing by one to 2.5 percent since 2011.

“This two-year extension is predicted to double the emissions reductions. And a moratorium over a 10-year period could reduce emissions by a full 2.5 to 6.4 percent,” said Fred Stolle of WRI’s Global Forest Programme, according to the Thomson Reuters Foundation.

According to a different analysis, by the Indonesian Forum for the Environment (Walhi) and Kemitraan, nearly one million hectares of natural forest and peatland were excluded from the moratorium in the provinces of Riau, Jambi, South Sumatra and Central Kalimantan.

“Researchers said this could be linked to local elections in which candidates promised to issue logging permits if they won,” according to Thomson Reuters.