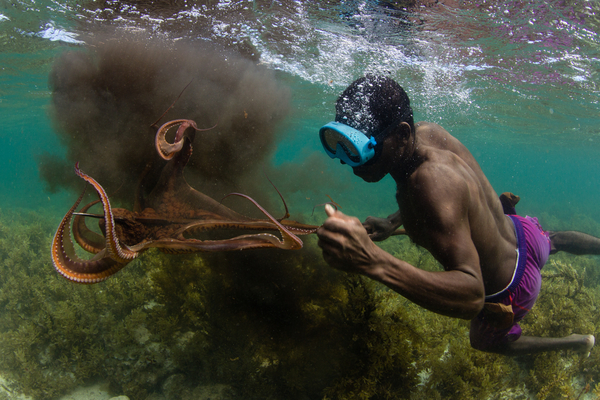 For communities that depend on fishing for their livelihoods, fishing bans as a way to conserve marine life are not always popular. But some villages in southwest Madagascar seem to have hit upon a strategy to reap economic gains from bans.

Temporarily closing down portions of their octopus-fishing areas every year not only helps villages revive declining octopus populations, but also generates more income for fishermen and fisherwomen, according to a study published today in PLOS ONE.

Fishing for octopus — predominantly the reef octopus (Octopus cyanea) — is a major source of livelihood for coastal communities in southwestern Madagascar. The fishers, mostly women, catch octopuses on coral-reef flats during low tide. Until recently, this was just a means of catching supper, but in recent years they have begun selling the octopuses to commercial seafood companies for export to Southern Europe. As a result, overfishing has increased and catches have declined. 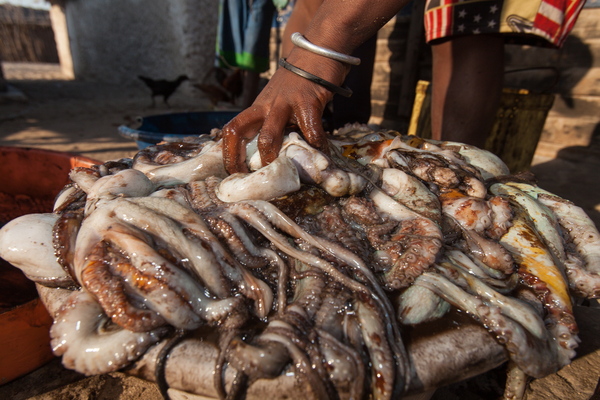 In recent years, buyers for southern European markets have been sourcing octopus from remote villages in southwestern Madagascar. This has enabled local fishermen to begin earning money from their traditional octopus fishery, but it has also led to overfishing. Here octopus is gathered for export. Photo copyright: Garth Cripps / Blue Ventures 2015.

So in 2004, following discussions with the London-based conservation group Blue Ventures Conservation and several of its partners, the remote fishing village of Andavadoaka in southwest Madagascar closed off a part of its octopus fishing grounds for 7 months. The closure site was around a barrier island, located seven kilometers (4.3 miles) offshore. While fishers were barred from catching octopuses during the closure period, they could continue to fish other species at the site. Blue Ventures provided technical, financial, and logistical support for the project.

“After the closure, the fishers landed enormous octopuses,” Alasdair Harris, a marine ecologist and executive director of Blue Ventures, told mongabay.com. “And the practice then quickly snowballed, and neighboring villages very quickly adopted the practice.”

In fact, following the success of the initial closures, communities in the region formed what is now called the Velondriake Locally Managed Marine Area (LMMA), a 1,000 square-kilometer (386 square mile) area with a governing body that oversees regular octopus closures. And in 2005 the Malagasy government began shutting down the entire southwest region’s octopus fishery between mid-December and late January. 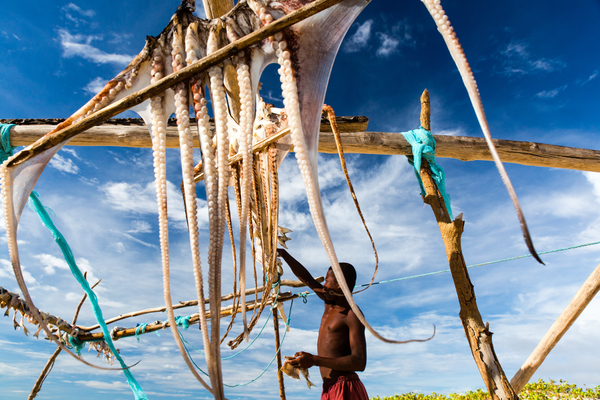 Similar community-based conservation strategies are being used worldwide. But their impact and efficacy remain largely understudied.

In the present study, Harris and several colleagues set out to assess whether periodic bans are indeed effective both in terms of conserving species and increasing fishing communities’ financial gains.

To find out, the researchers recorded octopus catch data from the 25 villages located within what is now the Velondriake LMMA over a period of eight years, between 2004 and 2012. Each year, for two to seven months, the villages set aside about one-fifth of their fishing areas as no-fishing zones, with the specific sites selected by the fishermen and fisherwomen themselves.

During the closure months, the fishers avoided the closed sites and caught octopuses only from open-access fishing areas. At the end of the closure, the fishers returned to those sites. 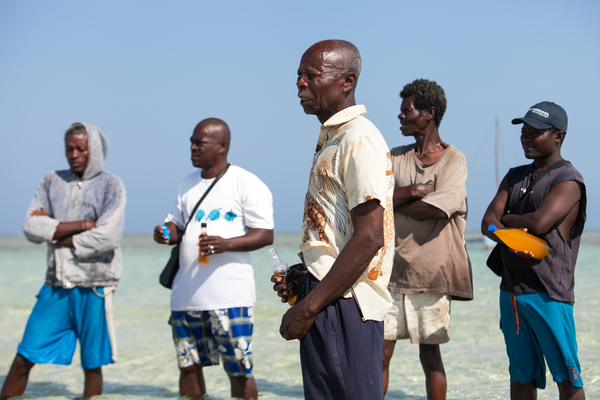 Malagasy fishermen mark the opening of an octopus fishing grounds that has been closed for several months to allow octopi there to replenish. They offer Fanta and rum (but never Coke, which they consider inferior) to their ancestors as part of an opening-day ceremony. Photo copyright: Garth Cripps / Blue Ventures 2015.

“Enforcement and control took place at the local level, by community members acting to enforce the local law (dina) passed to establish each closure,” Harris said. 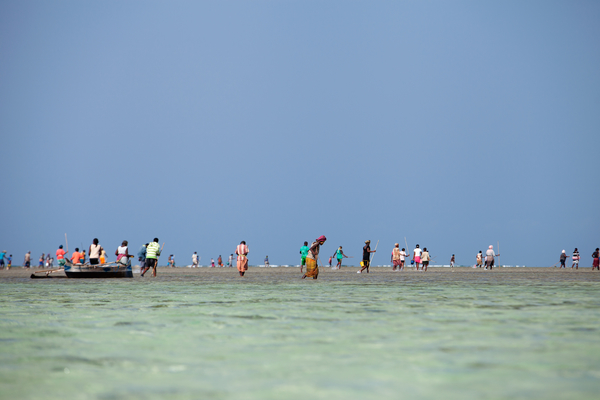 Fishermen and fisherwomen span out across an octopus fishing grounds on the day it was reopened to fishing after a closure of several months. The closures have become popular among fishing communities because they improve octopus harvests. Photo copyright: Garth Cripps / Blue Ventures 2015.

“The closures increase the number, as well as the weight of octopus caught for 30 days after the closures, helping improve the production of octopus,” Gilbert Francois, General Director of Madagascar’s Ministry of Fisheries and Marine Resources, said in a press release announcing the paper.

The increased catches have been good news for octopus exporters as well. “Thanks to the octopus closures, export companies have bigger octopuses” Vassant Ramdenee, Director of seafood business Murex International in the coastal city of Toliara, said in the press release.

The villages’ average income more than doubled, too, from about $600 during the month before a closure to $1,400 during the month after, the study found. “Importantly, in those sites with little reported illegal catch, we see a consistent pattern of positive earnings and rapid rates of return,” Harris said. 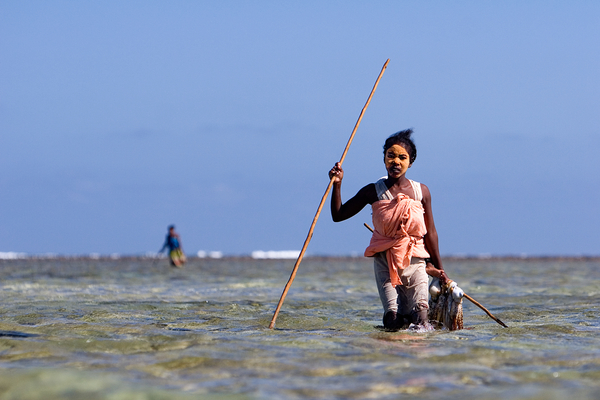 The researchers also found that octopus catches did not drop in open-access control sites, where fishers could catch octopuses all year round. Neither did the villages’ income decrease during the closure period. So the periodic closures seem to have a net economic benefit for communities that implement them.

One reason for this is that the fishers could still fish on 80 percent of their fishing grounds, Harris said. The closure periods were short too, he added.

In the open-access areas, “the data suggests that the fishers are able to catch exactly what they were catching before. So there is no perceived sacrifice in terms of village landings,” he added

The success of the program has had a ripple effect. The Velondriake LMMA’s governing body replicated the periodic fishing bans in the area’s mangroves to improve crab productivity. The committee also banned destructive fishing practices and even instituted the first of six community-enforced permanent no-fishing areas. And the neighboring island nation of Mauritius instituted a similarly successful two-month octopus fishing ban in 2012.

“That’s why we’re so excited,” Harris said. “We found a species that is responsive, and this completely changes the mindset of the communities about conservation: that it can work for them rather than against them.”

“And now you’ve got this enormous constituency of some of the poorest fishermen and women on earth, particularly women now, arguing for conservation. What an extraordinary turn-around,” Harris added. 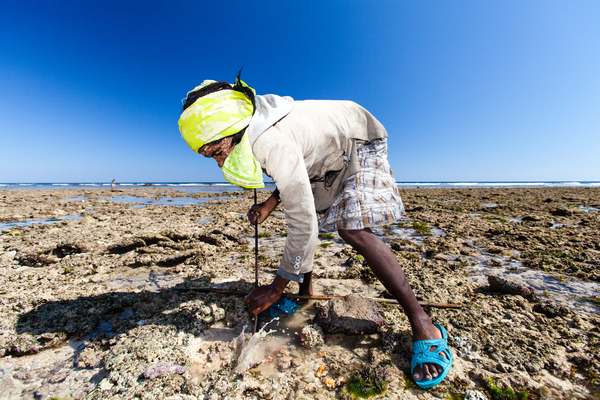 Earlier this year, in April, Harris received a $1.25 million Skoll Award for Social Entrepreneurship from the California-based Skoll Foundation for his work with the fishing communities in Madagascar.

The success of the Malagasy closures makes sense from a biological perspective, and the researchers had predicted that the reef octopus would respond well to such a management strategy, Harris said. In southwest Madagascar the species lives for about a year, grows very rapidly to a large size, and females spawn all year round, so it can quickly replenish itself when it’s not being hunted.

Many other commercially important species might not respond so well to fishing closures. For instance, a 2007 study in the journal Ecological Applications found that species like the parrotfish and surgeonfish can take about two decades to recover from overfishing, and so may require longer periods of protection. 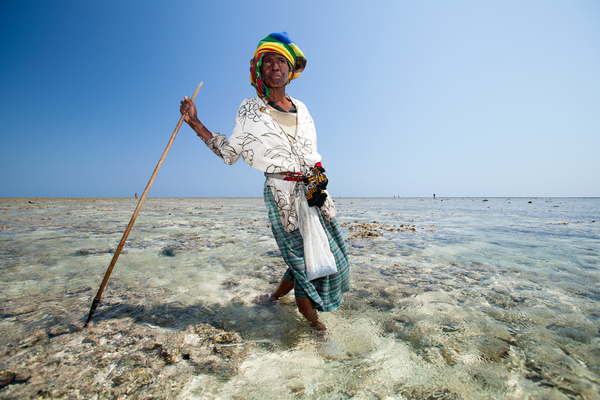 The Malagasy strategy may, however, work for species such as shrimp, Harris said. “And if we can make it work for shrimp, it could transform the way communities are involved in mangrove stewardship.”

“By demonstrating that effective fisheries management can reap dividends, this model can play a powerful role building local support for marine conservation,” said study coauthor Daniel Raberinery of Blue Ventures and the University of Toliara in the press release. 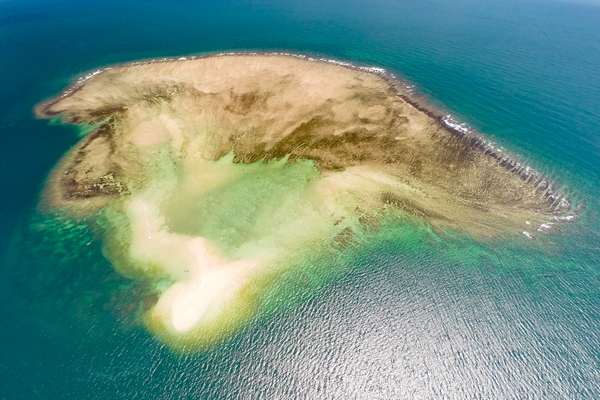 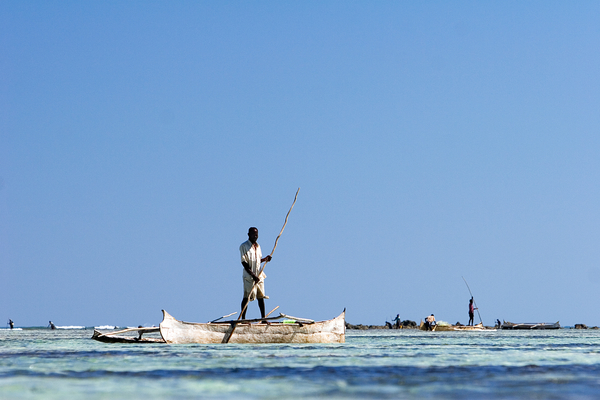 A fisherman punts out to a reef flat to fish for octopus. Photo copyright: Garth Cripps / Blue Ventures 2015.