Inside The Toxic Tour: Not for prime-time Ecuador (PHOTOS) 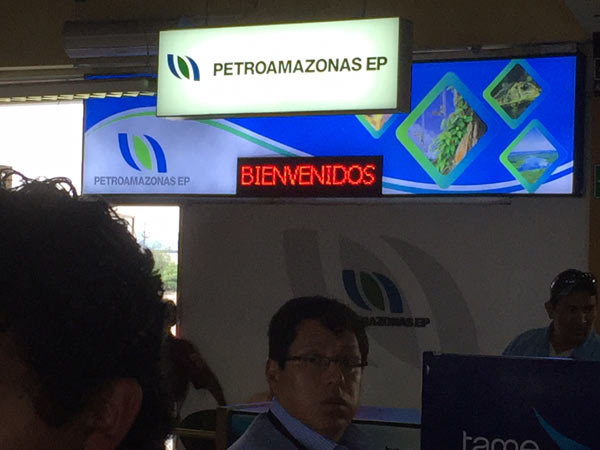 Welcome to Coca: “The unavoidable starting point for many of Ecuador’s most fascinating jungle tours,” proclaims Lonely Planet. And also the jumping off point for Ecuador’s Toxic Tour. Photo credit: Bill Hinchberger.

It is fitting that our story starts at the Hotel El Auca. Coca`s high-end digs, such as they are, began life as the base camp for Texaco workers back in the 1960s.

I wait in front of the hotel, watching the chaotic traffic lurch by. Population nearly 50,000, this outpost on Ecuador`s Amazonian frontier is known for its hot, dusty downtown; potholed side streets; and shops full of cut-rate junk echoing a once-rich native culture. Coca: “unavoidable starting point for many of Ecuador’s most fascinating jungle tours,” proclaims Lonely Planet.

Diocles Zambrano pulls up in a cab. I hop in and we take off.

The Toxic Tour is underway. 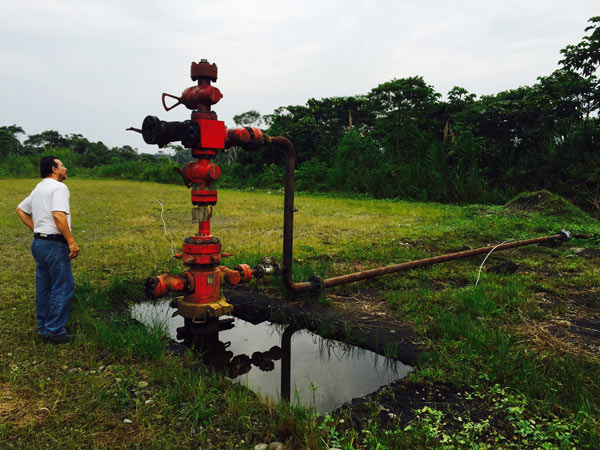 A three-hour tour. Maybe a little more. We’ll stick mostly to the Via El Auca, or Auca Road, main drag to Ecuador`s petroleum exploitation grid – laid down by Texaco decades ago. We`ll pay a visit to the ghosts of drilling past, and present, exploring battered remnants of rainforest first exploited by multinational oil companies and now controlled by Ecuador’s state-owned Petroamazonas firm.

Diocles heads a local NGO, the Ángel Shingre Leadership Network. He fills me in with some personal background. How he migrated here in search of land. How he began working with nonprofit groups to defend the rights of local smallholders. All about the bad old days of repression and violence in late 20th century Ecuador.

The Toxic Tour, he explains, grew out of a desire by locals to tell visiting dignitaries and journalists the story of petroleum exploration run amuck. The service used to be free. Now, with everyone facing hard times, activists charge a fee. The tours are designed to raise money, he says.

As we drive along the nicely paved road, I spot small gangs of men raking weeds on the shoulder. “Those guys are hired for show,” says my guide. “So that people will say, ‘Look there’s my cousin who got a job.’ But they are let go as soon as the task is over.” 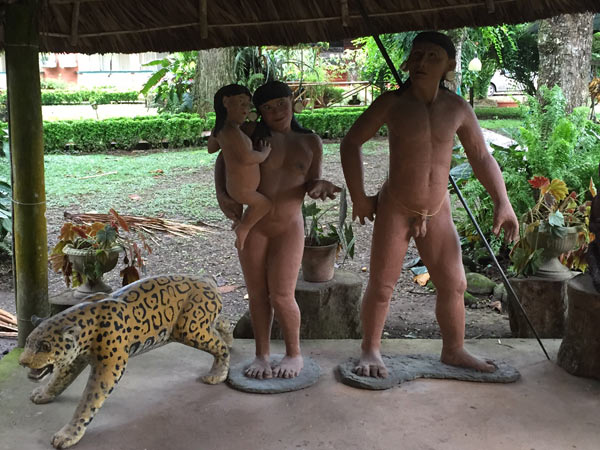 A native family welcomes visitors to the courtyard of the Hotel El Auca. The hotel began life as a compound for Texaco workers. Photo credit: Bill Hinchberger.

Perhaps, but as we drive, a livelier economic reality keeps jumping out at us: young men defying oncoming traffic on their motorbikes. Where, I wonder, could these guys get the money for their daredevil bikes except through oil industry jobs? And in depressed Coca, who could blame them? Big oil must indeed hold some hope for locals who dream of motorcycles.

We pass an urban settlement. That’s Dayuma, Diocles tells me. Population, a couple thousand. It’s named after the first member of the Huaorani to convert to Christianity; she was instrumental to the tribe’s controversial first contact with American missionaries in the 1950s. That’s another story. But Dayuma, the place, is important to the Toxic Tour too. We shall return. 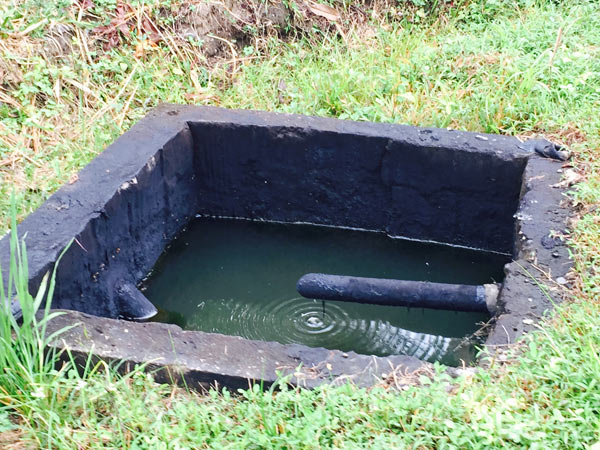 A runoff ditch connected to the oil pump on Jose Aveiga’s land. The water is rich in oil globules, the legacy of years of drilling. Photo credit: Bill Hinchberger.

First, we drop in on José Aveiga. We drive past his house to a flat, grassy plain perfect for a soccer game. In one corner, a deactivated oil pump. Surrounding it, what seems to be a circle of asphalt. Upon closer inspection, we see that it’s a solidified blobby mass of crude.

This marks the high point on Aveiga’s land. From there, we scramble down an incline and double back, slogging through a few hundred meters of forest. Up another grade, we come to a spring. Aveiga and Zambrano are lost in conversation about the former’s legal options. What I gather from the discussion, they think his land is woefully contaminated. I look down at the trickle of muddy water surrounding my boots. It contains small black globules. 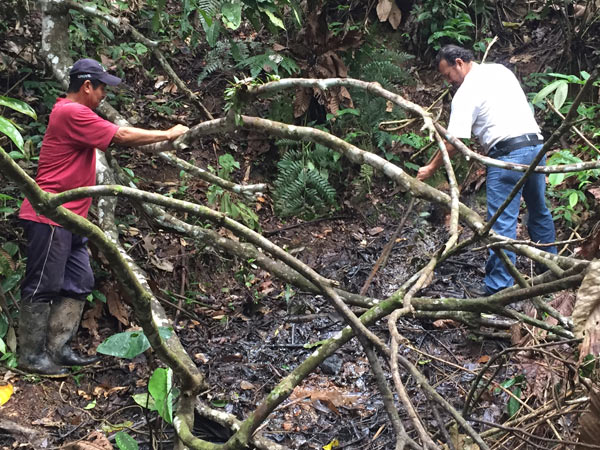 Jose Aveiga and Zambrano probe the oil soaked and contaminated ground. Aveiga had wanted to use the water running from here to fill fish tanks. Photo credit: Bill Hinchberger.

Aveiga tells me that he’d hoped to build fish tanks downhill to take advantage of the natural spring water. Good luck with that, given the contamination, he shrugs.

Back on the road. Once I stop paying attention to the motorcycles, the next thing that catches my eye is the labyrinth of pipes lining either side. Straight out of Jorge Luis Borges. At one point we stop to take a picture of an official billboard: “Towards a New Kind of Energy Production.”

Glancing from all those pipes and back at the billboard, it’s hard to not crack a cynical smile. I recall a recent conversation with Alberto Acosta, once president of Ecuador’s constituent assembly, a former minister, and former opposition presidential candidate. “We continue to believe that petroleum is going to solve our problems,” he told me. 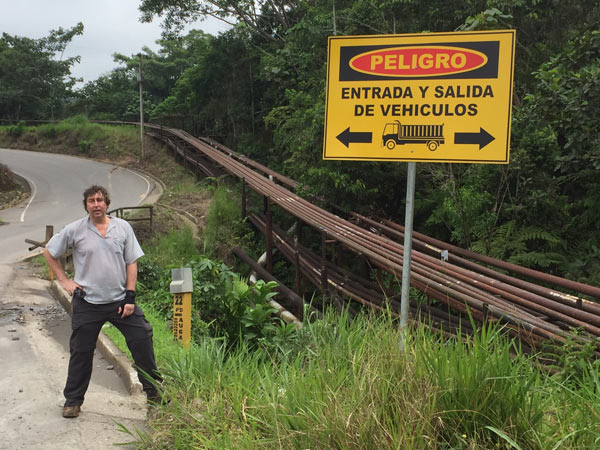 Danger! Watch for Vehicles! The author poses before a Borgesian labyrinth of pipes that run along a rainforest stream. Photo credit: Bill Hinchberger. 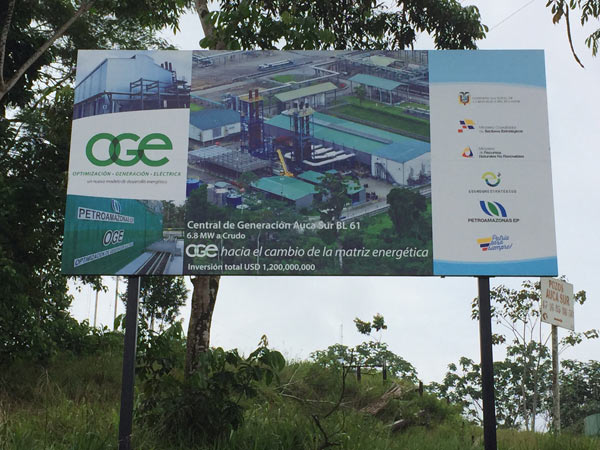 That and maybe tourism. During the 2015 Super Bowl, the Ecuadorian government spent four million dollars on a spot to attract visitors. With the Beatles’ All You Need is Love as soundtrack, it featured the inevitable Galapagos tortoises along with river shots presumably from the Amazon. “All in one place, so close,” intones the narrator. “All you need is Ecuador.”

The gringos who landed with me the other day at the Coca airport might have seen the ad. I wonder if they know how close many of Ecuador’s world-class ecolodges stand to the oily blotches along Auca Road. I imagine an alternative version of the Super Bowl anthem to promote the Toxic Tour, maybe It’s the End of the World by REM.

Those eco-tourists may be staying at the Huaorani Ecolodge, owned by Ecuador’s largest tribe. A trip there starts with the natural beauty, wildlife, and indigenous culture, but ends on Auca Road on the way to catching a flight out of Coca. “This part of your tour illustrates the reality of the threats facing the rainforest and the Huaorani people as much of the road passes through land that was formerly forested and lived in by Huaorani peoples,” reads the official website. 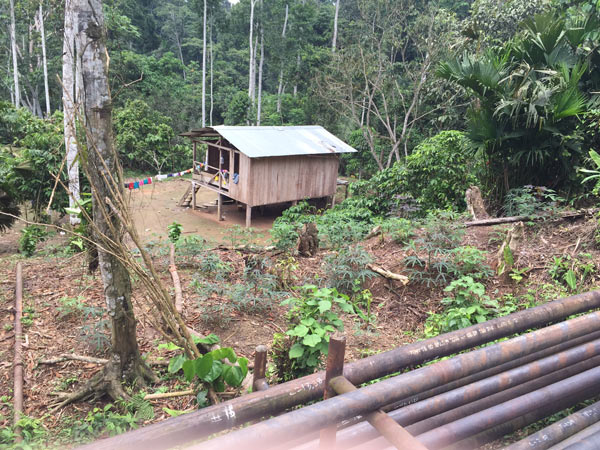 “The observed excess of cancer might be associated with the pollution of the environment by toxic contaminants coming from the oil production,” concluded one study of people living in a petroleum producing region of the Ecuadorian Amazon. Photo credit: Bill Hinchberger.

“People say the forest will dry up and the world will collapse if we don’t change the way we live,” declared Moi Enomenga, a Huaorani elder whose indigenous views were included in a recently released book, Global Chorus: 365 Voices on the Future of the Planet.

Meanwhile, back on the Toxic Tour, collapse seems like the operative adjective.

Zambrano asks the driver to pull off the highway. We follow a dirt road for a kilometer or so and arrive at a pumping station. He wants to check an area that should have been cleaned up after an oil spill. The eroded ditch reminds me of my native Southern California. Zambrano calls it sloppy reforestation.

We head back toward Coca. Shortly, we see a house, set behind what seems to be a stream, almost obscured by huge pipes. Zambrano says the homeowner’s teenage daughters were both sickened by oil contamination. Officials suggested that the suds in the water were as nutritious as milk. Whether any of this is true, I can’t say. Yet, there’s something emblematic in the story – something rooted in an oily mix of corporate mistrust, disinformation, and insufficient government regulation and transparency.

Credible health statistics are hard to come by in these parts. There’s a 2001 study that looked at another part of the Ecuadorian Amazon surrounded by oil fields, a village named São Carlos. Researchers from Ecuador’s Manuel Amunárriz Institute and the London School of Hygiene and Tropical Medicine found higher than expected indices of cancer among its residents. “The observed excess of cancer might be associated with the pollution of the environment by toxic contaminants coming from the oil production,” concluded the study. 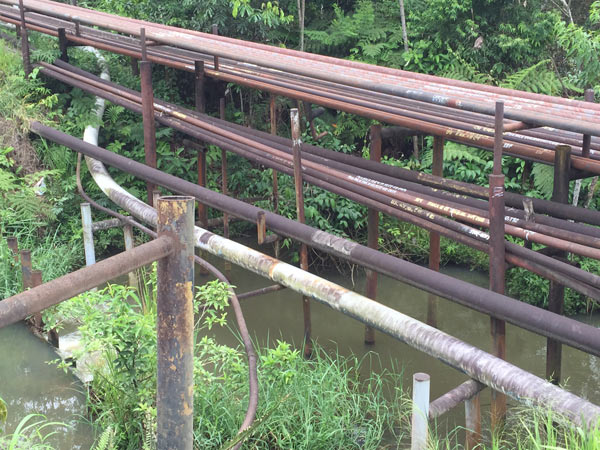 A rainforest intruded by a maze of pipes, like something out of Terry Gilliam’s Brazil. Photo credit: Bill Hinchberger. 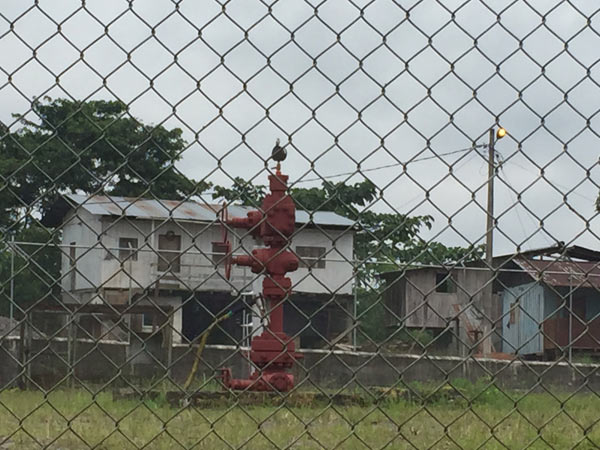 Before our tour ends, we stop again in Dayuma, arriving at a fenced area roughly the size of a football field, surrounded by homes and shops. In the middle of the field stands a solitary oil pump. To one side is the school. On the other, a runoff tank drips black goop. Zambrano tells me this is Dayuma’s ground zero. They drilled for and found oil here; the community grew up around the pump.

In 2007, Dayuma was the site of protests. Amnesty International reported this version of events:

In November 2007, residents of Dayuma in Orellana province demanded that companies hire more local residents, and make income tax and royalty payments directly to local government so that they could be invested in the province’s basic services and infrastructure. As part of the protest, the community blocked the highway Vía Auca, which reportedly cut oil production by 20 percent. A state of emergency was declared which “authorized public forces to intervene with the purpose of clearing roads that had been blocked and guarantee the production and transport of oil.

According to the Office of the Ombudsman, 11 protesters were detained and at least 26 faced charges of terrorism and sabotage; they were among those amnestied by the Constituent Assembly in 2008. One of the detainees in Dayuma was Guadalupe Llori, governor of Orellana province and a member of the opposition Plurinational Pachakutik Unity Movement. She was arrested in her home by the army on 7 December 2007 and accused of sabotage and terrorism. A third charge of fraud was brought against her after she was detained in what appeared to be an attempt to keep her in prison long enough to remove her from office. After 10 months in prison, Guadalupe Llori was acquitted and re-elected governor in 2009.

Many observers believe that the Dayuma protests marked the beginning of the end for President Rafael Correa’s brief stint as an environmental and pro-indigenous hero.

“Starting back in 2007, when the state presence in the oil sector was reinforced, you began to see strong repression of a whole range of protests,” says Luis Xavier Solis Tenesaca, a lawyer with the Human Rights Commission of Orellana, a non-governmental organization.

“Don’t believe the romantic environmentalists,” Correa said at the time. “Everyone who opposes the development of the country is a terrorist.”

Having reached the beginning of the end, the Toxic Tour came to a close. There was no gift shop.

There is a sound in the pathless woods,

There is a rupture on the lonely road,

There is society, from hence these pipes intrude