Have the ‘Bandit 6’ poached their last toothfish in the Southern Ocean? 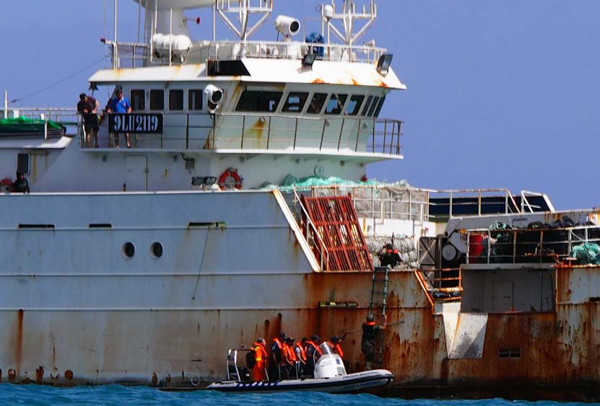 Authorities in Cape Verde board the Songhua, a vessel known to poach toothfish in the Southern Ocean. Photo credit: Sea Shepherd/Josephine Watmore

On May 20, Peter Hammarstedt, captain of the ship Bob Barker, was in the Cape Verdean port of Mindelo off the coast of West Africa, when he spotted a ship that he thought looked a lot like a pirate fishing vessel he’d been patrolling the Southern Ocean trying to locate for months.

The ship bore a different name, but after sending photos to the New Zealand Ministry for Primary Industries, Hammarstedt confirmed that it was indeed a known poaching vessel called the Songhua. The vessel was on Interpol’s wanted list, thanks in part to information fed to the agency by Sea Shepherd, the ocean conservation group that owns the Bob Barker.

Soon, a second vessel pulled in alongside the Songhua, and it proved to be the Yongding — though it, too, was going by another name. The Songhua and the Yongding are two of six Illegal, Unregulated, Unreported (IUU) fishing vessels dubbed the “Bandit 6” by Sea Shepherd because they are the last remaining, and among the most notorious, poachers of Patagonian toothfish (Dissostichus eleginoides) and Antarctic toothfish (D. mawsoni) in the waters around Antarctica.

The species are tasty, long-lived, slow-growing relatives of cod that are typically sold as Chilean sea bass in North America. Each of the ships can hold more than $1 million worth of toothfish. Their catches are never officially recorded and hence cannot be taken into consideration by the Commission for the Conservation of Antarctic Marine Living Resources (CCAMLR), which regulates fishing in the Southern Ocean and sets quotas for annual catches to ensure healthy fisheries.

But toothfish is not all these ships catch. They often use massive, banned nets up to 25 kilometers (15.5 miles) long that catch sea life indiscriminately. At times, when they’re caught fishing illegally, they’ll simply cut their nets loose and abandon them. Such "ghost nets" can continue killing marine life for years, affecting other fish stocks and whole ecosystems.

Though there has been a lot of progress reigning them in, poachers have until recently run rampant in the remote Southern Ocean, which has made any attempt to understand how fishing impacts toothfish populations nearly impossible. Andrea Kavanagh, director of Antarctic and Southern Ocean conservation for The Pew Charitable Trusts, told the Associated Press, “It’s not just hurting the stocks. It’s making the study of them invalid.”

The New Zealand navy also joined in the hunt for the pirate fishing ships, but finding them is difficult in the region’s vast expanse of water. Even once they’re found, IUU vessels are often difficult to prosecute because they fly flags of convenience that let them hide their true ownership. The only way to hold the ship’s owners accountable is to prove they are citizens of a country that has signed on to CCAMLR.

All of the Bandit 6 now captured

Sea Shepherdannounced on May 26 that the Songhua and Yongding had been boarded by military and police. Both were flying what were probably flags of convenience, so it will be a while before it is clear what, if any, charges there will be against its captain, crew, and owner.

With those two ships captured, all of the Bandit 6 have been located — and the other four have already been shut down entirely, according to Sea Shepherd, which ran a campaign called Operation Icefish from December 2014 to April 2015 aimed at disrupting the activities of IUU vessels in the Southern Ocean.

Not every IUU ship is aprehended quite so easily. The captain of the sixth, the Thunder, sank his own ship in April rather than allow it to be used as evidence after being tracked by the Bob Barker for more than four months. In the end, Sea Shepherd activists rescued the crew of the fishing vessel they’d been chasing. 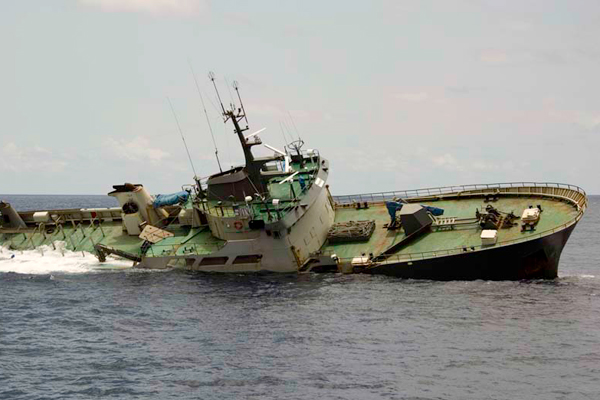 The Thunder goes down near Sao Tome and Principe off the coast of West Africa, having been deliberately sunk by its own captain and officers, according to the conservation group Sea Shepherd. The group says its vessel Bob Barker pursued the Thunder more than 11,500 miles from the Southern Ocean, where it was illegally fishing for toothfish. Photo credit: Sea Shepherd/Simon Ager.

Sea Shepherd’s confrontational tactics have been criticized even by those who acknowledge that they do get results — a pirate fishing vessel being chased (or sunk, for that matter) can’t catch fish, after all. Henrik Österblom, a marine ecologist with expertise in IUU fishing at Stockholm University, said that nongovernmental organizations often play a vital role in stopping poachers by working with governments and industry.

“The complexity of IUU fishing and the geographical scale of some of the areas affected has been proven to be beyond the traditional capacity of governments,” Österblom told mongabay.com. “Historically, governments have received substantial help from environmental NGOs and the fishing industry to identify vessels suspected to be involved in IUU fishing.”

But Österblom also said that while direct action to track and confront poaching vessels can complement other efforts, like diplomatic pressure or consumer pressure on companies and countries benefiting from illegal fishing, Sea Shepherd’s style of direct action can create violent and dangerous situations.

“I am a sailor and the first thing I learned is respect for other sailors,” Österblom told mongabay.com. “To put other sailors at risk and to use violent activities to protect whales or other species is not called for in my mind.”

A variety of tactics to combat fish poachers

There are other approaches to combating IUU fishing that don’t come with even a hint of danger, which Österblom said “are interesting and also complementary activities, with massive potential that I think we have only seen the beginning of.”

SkyTruth, for instance, is a small operation in West Virginia that uses satellites to track vessels through the automatic identification systems (AIS) they each have installed in order to prevent collisions at sea.

Together with Google and the ocean-conservation group Oceana, SkyTruth launched Global Fishing Watch late last year, an online platform for tracking and visualizing data on fishing activity around the globe. John Amos, founder of SkyTruth, said he hopes it will enable a new era of open-sourced stewardship of the world’s oceans.

“Satellite data is allowing us to make human interaction with the ocean more transparent than ever before,” Amos said in a statement announcing the Global Fishing Watch initiative. “Fishermen can show how they are doing their part to fish sustainably, we can motivate citizens to watch the places they care about, and we can all work together to restore a thriving ocean.”

SkyTruth also uses its satellite-plus-AIS method to work with the Pew Charitable Trusts’ Project Eyes on the Seas in monitoring the favored fishing grounds of IUU vessels and other areas susceptible to illegal fishing activities, like marine reserves, to try and catch poachers in the act. Their efforts led to the capture of a ship “crammed with illegally caught tuna and shark fins” back in February, NPR reported. 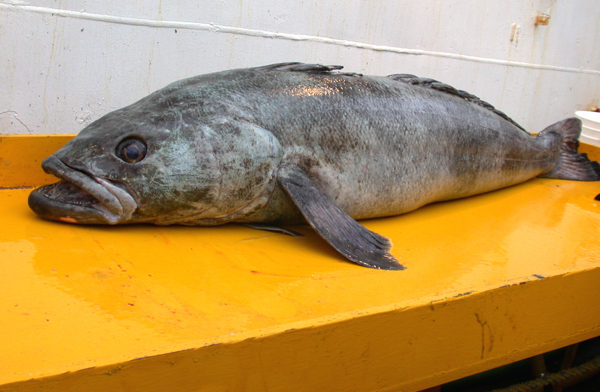 As for the Bandit 6, according to Sea Shepherd’s Captain Sid Chakravarty, whose ship the Sam Simon was also part of Operation Icefish, their ultimate fate is now up to the courts in the countries whose flags the vessels were flying, as well as the CCAMLR member countries involved.

“We will continue to keep an eye on the vessels and should there be news of them having slipped through the legal system, we will return once again to the Southern Ocean,” he told mongabay.com.

Chakravarty said it will take all efforts of the anti-illegal fishing movement to stop poaching once and for all. Meanwhile, confronting the poachers directly is a proven tactic, he said.

“The strength of any movement to combat poaching is enhanced by its diversity just as in the case of the marine eco-systems we are trying to protect. Direct action is part of that diversity and Sea Shepherd will continue to intervene using direct action against illegal operations on the high seas,” Chakravarty said.