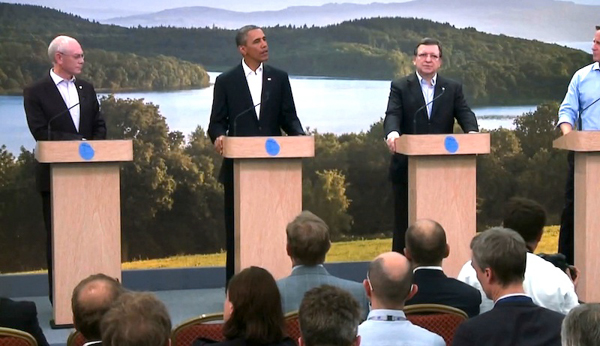 President Obama makes a statement about the trade agreement being negotiated between the U.S. and Europe known as the Transatlantic Trade and Investment Partnership in front of Lough Erne, Northern Ireland, in 2013. Photo credit: the White House.

A report released by the Obama administration last month claims that new international trade deals now being negotiated have stronger environmental protections than past trade agreements, but many experts are not convinced.

In a blog post about the report published on the White House website, Ambassador Michael Froman, the U.S. Trade Representative, lays out the administration’s case for trade agreements as “a vital tool” for combating threats to ecosystems and wildlife around the globe.

“Two decades ago, environmental provisions under NAFTA were relegated to a side agreement, with only a single enforceable obligation to ‘effectively enforce your own environmental laws,'” Froman writes, referring to the North American Free Trade Agreement between the U.S., Mexico, and Canada. “In contrast, our most recent trade agreements contain extensive, enforceable environmental commitments. These commitments are subject to the same dispute settlement procedures as other commercial obligations, including recourse to trade sanctions in the event of a violation.”

Among the environmental protections included in TPP that haven’t featured in earlier trade agreements, according to a chart Froman uses to illustrate his point in the post, are commitments on controlling marine pollution and ozone-depleting substances, plus a stipulation that trade sanctions will apply to all provisions of the agreement in the event of a violation by a member country. There are a number of conservation measures, as well, including commitments on fisheries management, protected areas, and combating illegal wildlife trade, and a requirement that all parties fully implement the Convention on International Trade in Endangered Species, known as CITES. The chart also says that under TPP, “Parties shall not waive or derogate from environmental laws to encourage trade/investment.”

How exactly will TPP guarantee all those commitments? And will TTIP have similar provisions? If not, how are they different, and why? The White House did not respond to requests for further detail..

According to Martin Wagner, the managing attorney of environmental law group Earthjustice’s international program, the most important thing to note about any claim regarding what TPP or TTIP will or won’t do is that there is no way to evaluate its truthfulness. The exact wording of the deals will ultimately determine just how strong the environmental protections truly are, Wagner told mongabay.com.

But the Obama administration has not made the negotiating text of either TPP or TTIP available to the public, so there is no telling what the exact wording might look like in the final agreements, according to Wagner, who has been working at the intersection of international trade and the environment for 20 years.

Worse yet, by pushing for Trade Promotion Authority, also called "fast-track authority," the administration is essentially saying it doesn’t plan to let the public see any of the exact wording of TPP’s or TTIP’s provisions until it is too late to change them, Wagner said. Under fast-track authority, the administration would be allowed to negotiate these binding deals regarding international trade, a duty explicitly given to Congress in the Constitution. Congress would then hold a simple yes-or-no vote on the final agreement negotiated by the Obama administration, and would not be allowed to amend any of the agreement’s provisions or open them up to debate. (A bipartisan group of lawmakers recently introduced a resolution that would require that all trade deals be made publicly available for 60 days prior to a fast-track congressional vote, according to news reports.)

Wagner pointed out that while we don’t know their exact wording either, investment provisions in the agreements will likely establish so-called “investor-state” resolution processes. These will all but guarantee that in any situation where there’s a conflict between corporate interests and the environmental concerns of a national government, trade will trump the environment.

“Among the most dangerous but least known parts of today’s ‘trade’ agreements are extraordinary new rights and privileges granted to foreign corporations and investors that formally prioritize corporate rights over the right of governments to regulate and the sovereign right of nations to govern their own affairs,” the Washington, D.C.-based watchdog group Public Citizen states on its website. “These terms empower individual foreign corporations to skirt domestic courts and directly challenge any policy or action of a sovereign government before World Bank and UN tribunals.”

To Bill Snape, who has more than two decades of international-trade law experience and is senior counsel at the environmental advocacy group Center for Biological Diversity in Washington, D.C., investor-state resolution provisions are the main reason free trade deals like TPP and TTIP cannot be used as effective means of protecting the environment.

Snape predicted that the export of natural gas is where this will really come into play. The mechanisms by which trade agreements promote natural gas are many, according to Snape. For one thing, he said the investment provisions would allow any corporation to sue if they have made investments in a place that later adopts a ban or moratorium on fracking, as Maryland did just last week.

Plus, once a foreign country becomes a trading partner with the U.S., Snape said, it is allowed to import unlimited amounts of natural gas from the U.S. “From a climate point of view and, frankly, from a consumer point of view, that would be a disaster,” Snape said. “These trade agreements allow unlimited natural gas exports. More fracking, more methane, more toxic waste problems. To these trade agreements, the more fossil fuels we burn and the more we trade them around the world, the better it is.”

Another specific concern is how TTIP might impact the European Union’s landmark regulation on the production and use of chemicals, known as REACH (which stands for “Registration, Evaluation, Authorisation and Restriction of Chemicals”). Lisette van Vliet, a senior advisor on chemicals and chronic-disease prevention for the Belgium-based advocacy group Health and Environment Alliance, told mongabay.com that REACH has many evolving parts meant to be phased in over time, and the law’s ability to protect environmental health lies in its thorough and full implementation.

But she said TTIP has huge potential to undermine the effectiveness of the law because of a provision being negotiated on “regulatory cooperation” between industry and regulators. “In regulatory cooperation in particular, the opportunities for excessive corporate lobbying and influence are legion,” van Vliet said. “REACH already foresees public consultation for all interested parties in many of its processes, so additional occasions to allow external input from industry or other stakeholders are unnecessary.”

Ultimately, increased trade and investment is not a worthwhile end in itself, van Vliet says. “If we do not make trade and investment (and regulatory cooperation) serve our needs to vastly improve public health or achieve environmental sustainability, we are not fulfilling our international obligations, our EU commitments, or our moral obligations to current and future generations.”