The charity that Indonesia’s Golden Agri-Resources has enlisted to devise and implement its zero-deforestation and community-engagement commitments suspended its cooperation with the palm oil giant yesterday, following “several breaches” of the policies they had designed together, according to The Forest Trust (TFT), which helps companies run responsible supply chains.

A few hours after TFT announced the suspension, Singapore-listed Golden Agri said in a statement that its chief sustainability officer, Peter Heng, had resigned “to pursue new career opportunities.”

His replacement is Agus Purnomo, who has headed one of Golden Agri’s Indonesian subsidiaries, Sinar Mas Agro Resources and Technology (Smart). Smart’s own subsidiary, Kartika Prima Cipta, became the subject of a formal complaint against its operations last year after Golden Agri filed to expand its plantations in 18 of its subsidiaries including Kartika Prima, despite evidence that Kartika Prima had taken community land without residents’ informed consent, failed to properly conduct a high-conservation value (HCV) assessment and more. The grievance was lodged by the Forest Peoples Programme (FPP), a UK-based NGO, with the Roundtable on Sustainable Palm Oil (RSPO), the industry’s largest voluntary certification scheme.

Though TFT was vague in its announcement, the suspension is almost certainly a response to what is apparently seen as Golden Agri and Smart’s lackluster handling of the RSPO complaint, which takes on additional importance because Kartika Prima is piloting Golden Agri’s sustainability commitments. (Update: TFT wrote to Mongabay after the publication of this story that the suspension “was not based on the RSPO/FPP complaint but rather was based on our own experience of recent slow progress by GAR – as TFT members – on their [Forest Conservation Policy] work plan, and several breaches of PT SMART’s Forest Conservation Policy (FCP) and Social and Community Engagement Policy (SCEP), although the FPP/RSPO issue was a part of the failings we noted.” Mongabay notes that breaches by Smart of its policies were the subject of the FPP’s RSPO complaint.) The RSPO upheld the complaint in March and earlier this month prohibited Golden Agri from “acquiring or developing any new areas” pending its resolution.

TFT wrote on its website yesterday that “general progress [putting Golden Agri’s commitments into effect] has slowed recently and TFT is aware of several breaches of PT SMART’s Forest Conservation Policy (FCP) and Social and Community Engagement Policy (SCEP). As a result, we have suspended their membership with immediate effect.

“We advise PT SMART that it needs to re-affirm its commitment to its current FCP and SCEP, review these to widen the scope and goals, while focusing on credible and robust implementation. TFT will work with PT SMART management on a time-bound action plan addressing the key issues we identify, providing regular updates on progress.”

A Golden Agri statement posted to its website today acknowledged “implementation challenges” and stressed the company’s dedication to its policies.

“The protection of high conservation value areas and high carbon stock forest is central to our ambition to be a leader in the zero-deforestation movement,” the statement reads. “So is strong social and community engagement and the implementation of social principles throughout our supply chain. We re-commit to leading our industry’s sustainability efforts, as the first Indonesian oil palm company to commit to zero deforestation. We will keep stakeholders regularly updated on our progress.” 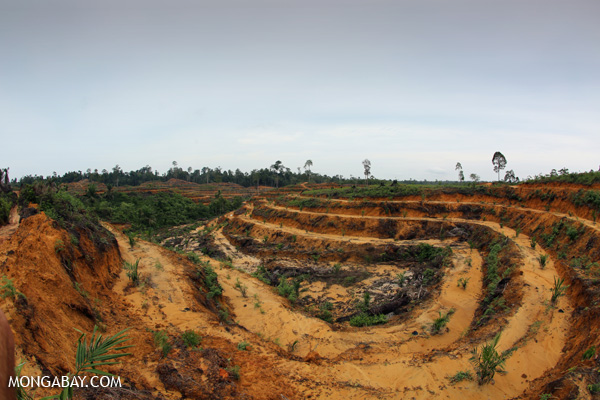 It was around four years ago that Golden Agri signed on with TFT, which takes businesses through “a four-step change journey” to improve their environmental and social practices, after consumer-products groups like Nestle and Unilever dropped it as a supplier, the result of a Greenpeace exposé and boycott campaign.

In 2013, the FPP approached Golden Agri with an offer to conduct an independent, self-funded review of Kartika Prima’s pilot operation. That review turned up a host of transgressions about which the FPP carried on a dialogue with Golden Agri until mid-2014, when, to the FPP’s chagrin, Golden Agri filed for the 18 plantation expansions under the RSPO’s New Planting Procedure (NPP).

In response, the FPP submitted a detailed complaint, and Golden Agri subsequently agreed to withdraw the NPP submissions and halt all land clearing in the concessions from November 3 last year.

Golden Agri’s sustainability commitments go above and beyond the requirements of the RSPO. The company stands accused of violating both standards.