by Morgan Erickson-Davis on 6 April 2015 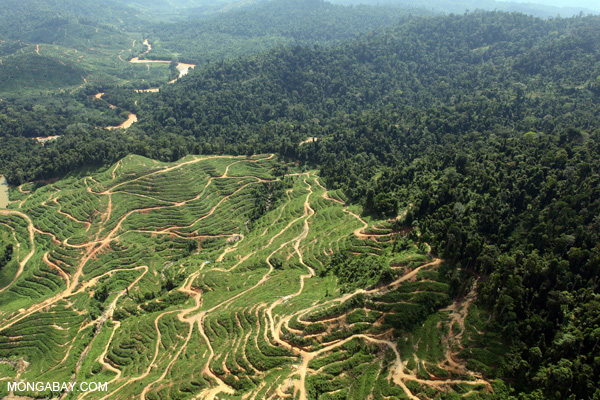 Forests not only house many of the world’s species, but also much of its carbon. Now, a toolkit has been developed by a group of companies and organizations with the aim of helping other companies and NGOs identify High Carbon Stock (HCS) forests. The toolkit was endorsed last week by major NGOs and plantation companies in Singapore.

Today, there is more CO2 in the atmosphere than at any other time in human history, contributing to a plethora of global changes from rising and acidifying seas to major shifts in air circulation patterns. Clearing forests releases carbon that had been stored in trees and other vegetation, adding to what is already a major problem. By looking at forests through carbon-colored glasses, those that store the most can be singled out for conservation – benefiting both the wildlife that reside within them as well as ecosystems and human communities around the world that stand to be affected by global warming.

But how can you tell which forests store the most carbon? The answer’s pretty simple: the oldest, least disturbed, densest ones. As described by Greenpeace, HCS areas can comprise a gamut of forest types from “Old Scrub” to “High Density Forest.” These areas would be the focus of conservation attention under this approach, whereas areas categorized as “Young Scrub” and “Cleared/Open Land” are deemed most suitable for plantation development. The HCS Approach was first developed in 2011 by Greenpeace, The Forest Trust, and Golden Agri Resources – the world’s second-largest palm oil plantation company.

In order for the HCS Approach to be effective, Greenpeace says, it needs to be implemented in land use maps. To this end, the HCS Approach Steering Group set forth to devise a way plantation companies could assess the HCS value of land they are considering clearing. The steering group itself is comprised of a number of major plantation companies that have issued commitments to eliminate deforestation, along with NGOs and technical support organizations.

The toolkit includes background on HCS Approach methodology, a guide explaining how to conduct and integrate HCS assessments, and concludes with ideas on further study. Its developers and endorsers hope its use will result in improved land use plans.

“Removing deforestation from commodity supply chains has gained momentum in the past two years with many major resource-based companies now sharing the same commitment,” said Jeremy Goon, Chief Sustainability Officer at International Limited, the world’s largest palm oil company. “Along with established conservation approaches like High Conservation Value (HCV) areas, the High Carbon Stock (HCS) framework is a cornerstone for sustainable plantation development. We now look forward to transitioning the framework from concept to field implementation through a defined Toolkit.”

Wilmar made headlines in 2013 when it made a sweeping zero deforestaion commitment. However, a 2014 report found Wilmar may have logged HCS forest despite its commitment. Wilmar was investigating the claims as of January, 2015. Earlier this year, the palm oil giant announced a tool it says will help eliminate deforestation in its supply chain.

“Wilmar’s No Deforestation commitment covers its entire supply chain, including its third-party suppliers,” Goon said; “our next step is to work with key actors in the palm oil industry, including with the relevant government authorities and our suppliers towards equitable solutions to forest preservation and socio-economic development.”

The toolkit was endorsed by a broad spectrum of companies and organizations, including Golden Agri-Resources, Asia Pulp and Paper, Wilmar, Greenpeace, Agropalma, WWF, the Forest Peoples Programme, Rainforest Action Network, Unilever, and The Forest Trust.

“As major players in the palm oil and pulp industries seek to implement their new commitments, this tool, properly used, holds the potential to protect forests as well as secure the land rights and livelihoods of indigenous peoples and local communities,” said Marcus Colchester, Senior Policy Advisor at the Forest Peoples Programme.