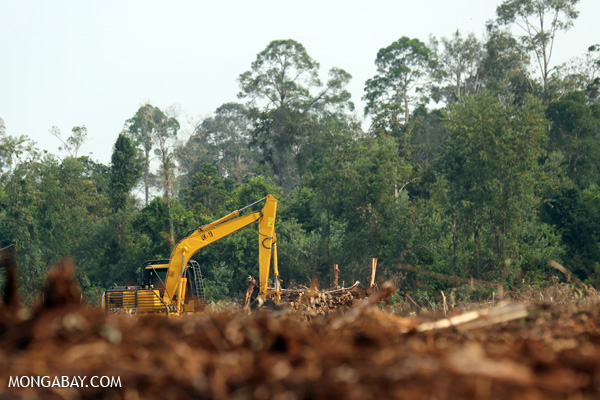 Excavator working in a plantation with rainforest in the background in Sumatra. Photo by Rhett A. Butler.

International aid to protect forests in Indonesia and Brazil pales in comparison to domestic subsidies for commodities driving deforestation there, according to a new report by United Kingdom-based think tank Overseas Development Institute (ODI).

If the countries received an average of $1 billion each year via the Reducing Emissions from Deforestation and Forest Degradation (REDD+) scheme, their annual agricultural and biofuel subsidies for just four commodities associated with forest loss – palm oil and timber in Indonesia, soy and beef in Brazil – amounted to $41 billion.

“As a result, these subsidies are likely to have a far more significant impact on private investment in activities that drive deforestation, than current REDD+ finance,” says the report, titled “Subsidies to key commodities driving forest loss.”

Recognizing that subsidies can take many forms and be difficult to quantify, the researchers looked at subsidies specific to the commodities in question as well as broader subsidies for the agricultural and biofuel sectors and national development.

The highest-value subsidies were not necessarily the biggest drivers of deforestation. For Indonesia’s palm oil, the most important subsidies were identified as those propping up domestic demand, especially in the biofuels sector, which sources palm oil more than anything else.

These include “Indonesia’s domestic fuel blending mandate, subsidies to biofuel production such as exempting biofuels from the transport fuel sales tax, and the government covering financial losses resulting from Pertamina’s (a state-owned company) sale of biofuels at less than production costs.” 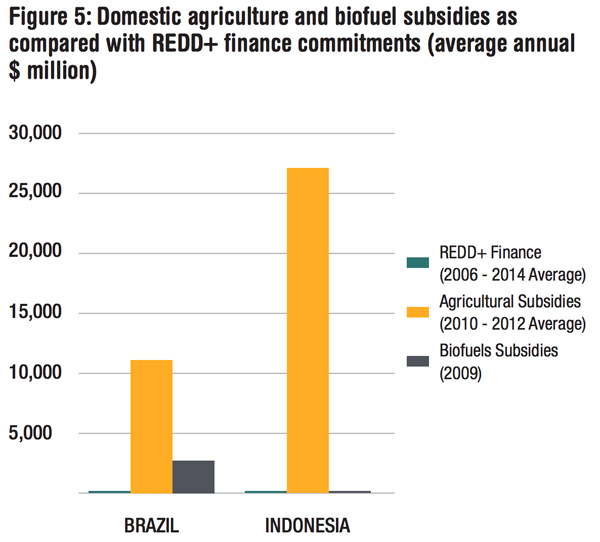 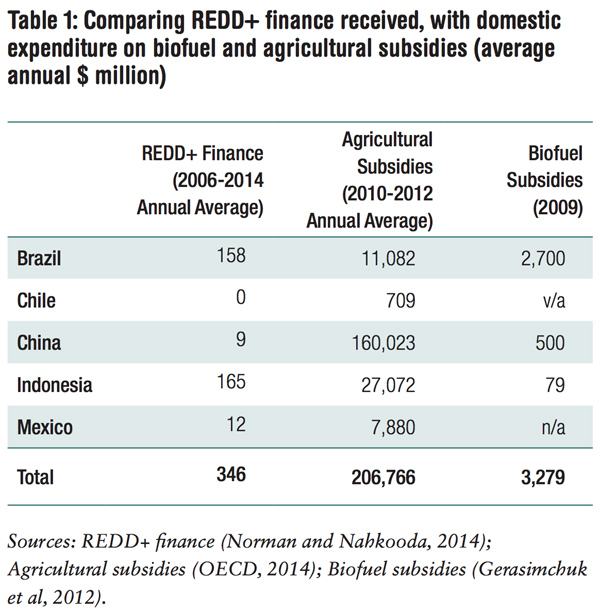 Tax exemptions and soft loans – loans with lenient terms – were also thought to have a big impact on investment in palm oil production.

While Indonesia’s fertilizer subsidy amounts to $1.8 billion per year, it was considered “high value, low impact” because it applies to other commodities besides palm oil and makes up a small part of the cost of producing palm oil.

By contrast, Indonesia’s timber subsidies focus on supporting access to land and production. They generally are meant to incentivize development of industrial timber plantations as an alternative to small-scale logging permits, which in the past were issued by the thousands “without safeguards for conservation and forest protection.”

In general, though, subsidies were less focused on access to land than expected, with most aiming to boost demand and reduce production costs.

Looking ahead, the researchers recommended that REDD+ finance be redirected to “support identification, estimation and designing the reform of these subsidies – in a manner that would shift incentives and resulting investment away from forest loss and toward REDD+.” They also suggested that REDD+ might be made conditional on subsidy reform.