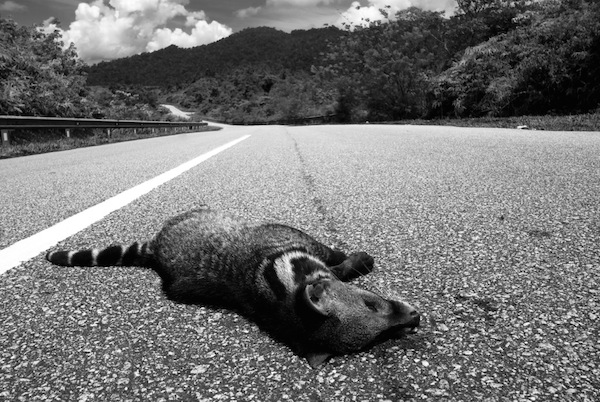 A large Indian civet hit and killed by a car in Peninsular Malaysia. Photo by WY Lam.

Habitat loss and illegal hunting are leading drivers behind mammal population decline and extinction in the tropical forests of Southeast Asia. But what’s driving these drivers? Road infrastructure, according to research. Dr. Reuben Clements from James Cook University, along with his colleagues, conducted the first-ever comprehensive study examining the impacts of road infrastructure on mammal populations in Southeast Asia. Their findings were recently published in PLOS One.

Roads pose extreme environmental challenges, particularly for conservation efforts in the global south, where roads are often intertwined with economic growth and habitat degradation. From just 2005 to 2010, Southeast Asian landscapes saw an increase of total paved roads from 16 to 51 percent, according to data from the World Bank.

Southeast Asian countries are astonishingly underrepresented in studies examining the impact land-altering road networks have on mammal populations, according to the study. However, the relative few that have been conducted indicate the situation may be dire. Scientists estimate 21 to 48 percent of native mammal species in Southeast Asia may be extinct by 2100 due to habitat loss and illegal hunting. Roads often exacerbate these threats and additionally impose direct negative impacts on mammal populations such as habitat fragmentation, discouraging movement within a population’s range, and hindering gene flow between populations. Roadkill also becomes more prevalent with the introduction of road networks. Moreover, illegal hunting increases as poachers gain easier access to wildlife. 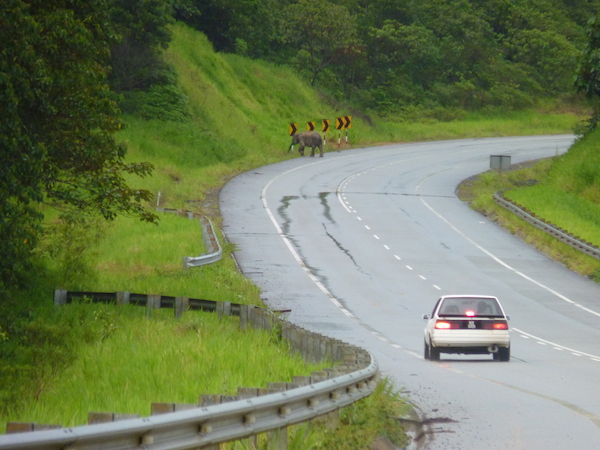 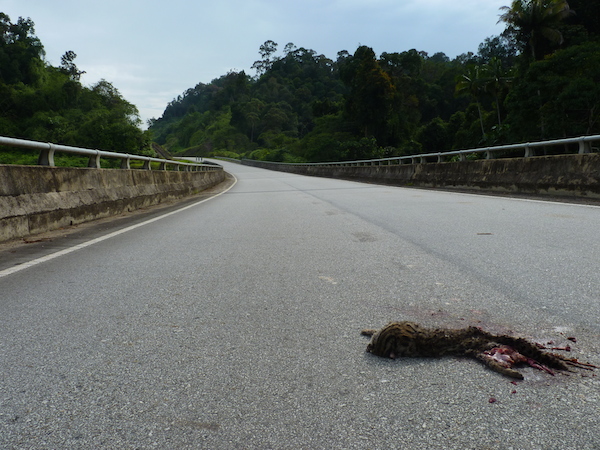 The authors write that there appears to be a geographical bias in publications addressing environmental impacts of road infrastructure on wildlife and biodiversity to date. They note a majority of research is focused outside of the tropics, and that which does pertain to the tropics is often limited to regions in South America, Central Africa, and Australia. They suggest this absence of Southeast Asian research could simply be due to a lack of recognition of issues there.

“During my early years as a conservation scientist working in an NGO in Malaysia, I was not aware of the extent to which roads were a threat to mammals in the tropics until I read papers by scientists such as William Laurance, Steve Blake and Miriam Goosem, who quantified the impacts of roads on mammals in tropical regions such as South America, Africa and Australia,” Clements told mongabay.com. “The fact that road planning agencies were, and still are, not a major stakeholder in most species conservation plans in Southeast Asia illustrates the lack of awareness and recognition of roads as a threat to mammals.”

Clements and his team examined 16 major roads in seven Southeast Asian countries. They built their study on previous species distribution research and satellite imagery, as well as their own fieldwork to answer three questions: do existing roads cut through the habitat of endangered species? Following the establishment of a road, does the conversion of forests to agriculture or urban landscapes intensify? And lastly, does the presence of roads contribute to illegal hunting and wildlife trade operations? 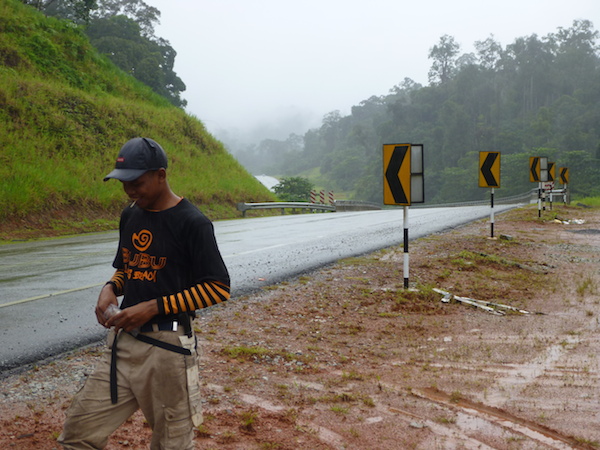 A field assistent gets ready for mammal surveying in forest along a road in Malaysia. Photo by Reuben Clements.

The researchers also interviewed thirty-six mammal research experts who had worked throughout Southeast Asia, and who provided the location of sixteen existing roads as well as eight planned roads within the region. These roads were deemed by the experts to be among the most influential in bringing land conversion and illegal hunting into forested regions.

In particular, the scientists used the Asian tapir (Tapirus indicus) as a lens through which to investigate the effects of roads on mammal habitat encroachment. Asian tapirs, also known as Malayan tapirs, are listed on the IUCN red list as Endangered and are primarily threatened by habitat loss and illegal hunting, according to previous research. These shy creatures are highly sensitive to habitat fragmentation and avoid areas within a hundred meters of agricultural land or disturbed forest edges.

The researchers examined the habitat distribution of Asian tapirs along three roads within Peninsular Malaysia. Modeling simulations, supplemented with survey data gathered from on-site camera traps, were used to identify potential suitable tapir habitat in forested areas surrounding existing and planned roadways. The modeling results showed that all three roadways do indeed transect highly suitable tapir habitat and could pose potential threats to the security of tapir populations as well as other mammals.

Results from the Landsat imagery showed that profound forest conversion occurred in the nine years following completion of PR 76. Land was intensely converted from forest cover to bare or urban areas. Additionally, forest composition changed during and after road construction, with primary forest replaced with mosaic-patched land comprised of degraded and secondary forests.

Data from Global Forest Watch supports the study’s Landsat findings, showing deforestation in Snuol Wildlife Sanctuary has been ramping up since the 2001, and more than 24,000 hectares of the sanctuary’s 62,300 hectares of tree cover were lost between 2010 and 2013 alone. In other words, Snuol Wildlife Sanctuary, an official protected area, lost about 38 percent of its forest cover in just three years. 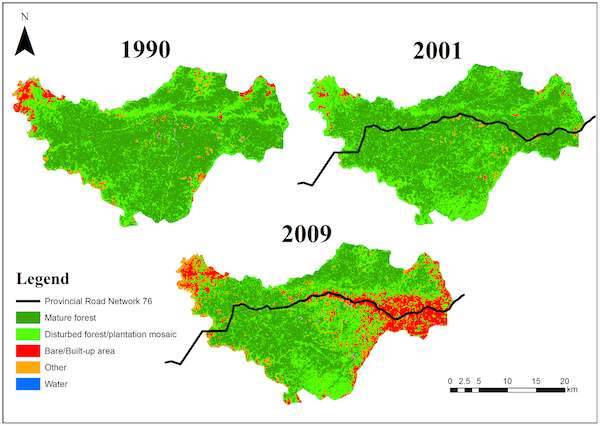 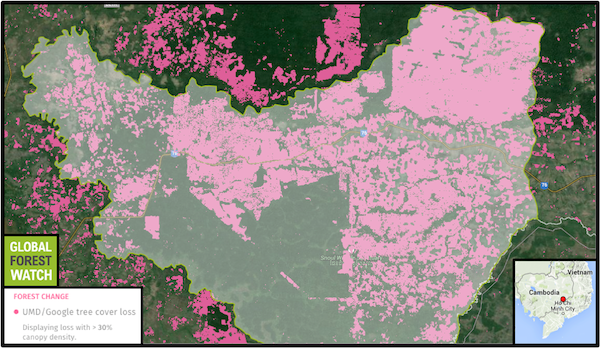 From 2010 to 2013, Global Forest Watch shows Snuol Wildlife Sanctuary lost 38 percent of its tree cover, primarily along roadways that connect to PR 76. Click to enlarge. 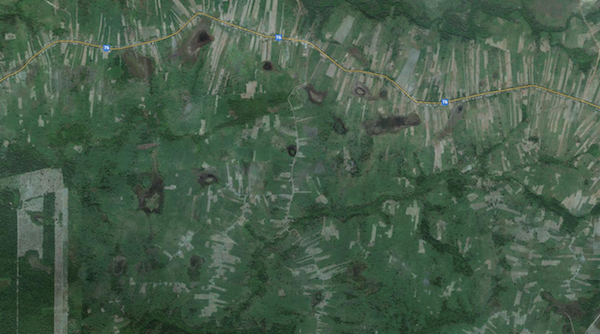 Additionally, on-foot surveys were carried out along state road 156 in Peninsular Malaysia to examine the influence of roads on illegal hunting and trading activity. Roads play a large role in facilitating the illegal trade of wildlife by providing poachers with easy access to forests and transportation of goods. The intensity of illegal hunting activity was measured by the presence of snares and traps along the side of Road 156. During their surveys, the researchers detected 125 encampments along the roadside-forest edge as well as 131 illegal snares near the road. To help deter poaching along this very road, Clements started a large carnivore conservation project under his non-profit research group, Rimba, in 2014. This project currently receives support from two American organizations – Panthera and Woodland Park Zoo.

The study results show that roads are key drivers behind habitat loss and illegal hunting, which deeply threaten mammal populations in Southeast Asia. Yet, identifying the driver factors and motivation behind road construction is much more convoluted.

The authors write that there is a common misconception that road infrastructure benefits poor, rural communities when, in fact, most of the new roads in Southeast Asia are built to connect towns and cities. Supplies brought into rural areas via new roads are often too expensive for the rural poor to afford, and the living standards of these communities are usually not improved. Furthermore, the authors caution road development projects can come with hidden agendas, often involving the exploitation of natural resources. They reference timber supplies in Laos, which over the past five years have allegedly come from forest clearing associated with road construction. 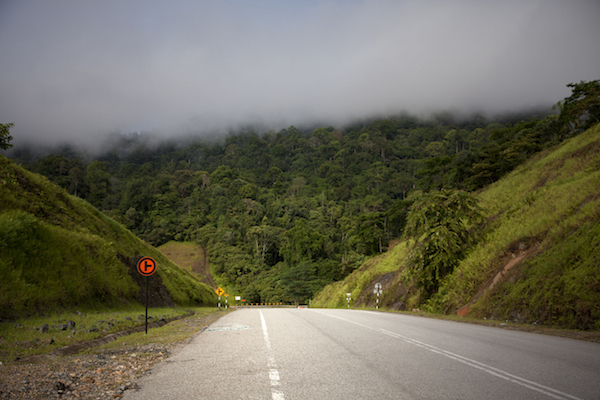 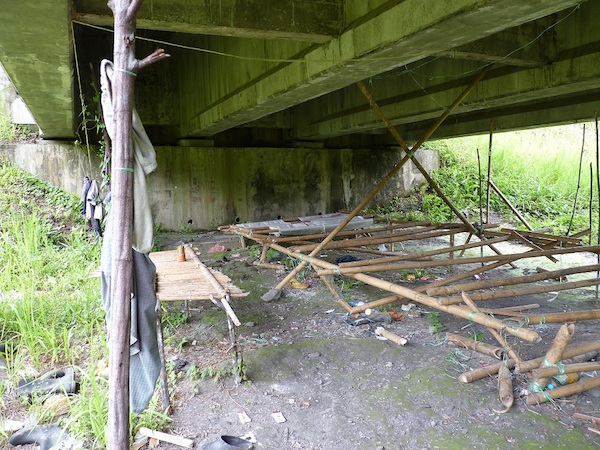 A hunting encampment along State Road 156. Photo by Reuben Clements.

The researchers recommended ten mitigation methods for minimizing environmental impacts of road infrastructure, and informing conservationists and government agencies. Among their strategies, they emphasize the importance of maintaining forest quality and connectivity in areas surrounding existing roads. They also suggest an increase in law enforcement near roads bisecting endangered species habitat, which could deter illegal poaching.

“In Malaysia, I have been trying to raise awareness of the environmental impacts of roads within the government agency responsible for road planning and development since 2010, but they have yet to grant me an audience to discuss my findings from this study,” said Clements, who is also an Associate Professor with a local research institute from Universiti Malaysia Terengganu. “Armed with greater awareness of the issues related to existing and planned roads highlighted in our study, it is our hope that conservation practitioners can approach relevant government agencies, ideally with some quantitative evidence, to help mitigate their impacts on endangered mammals.” 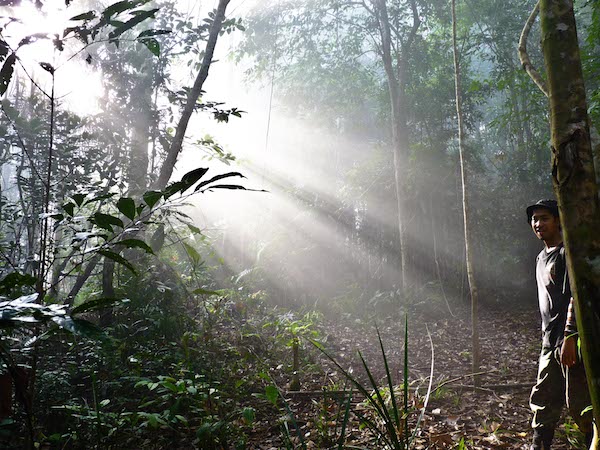