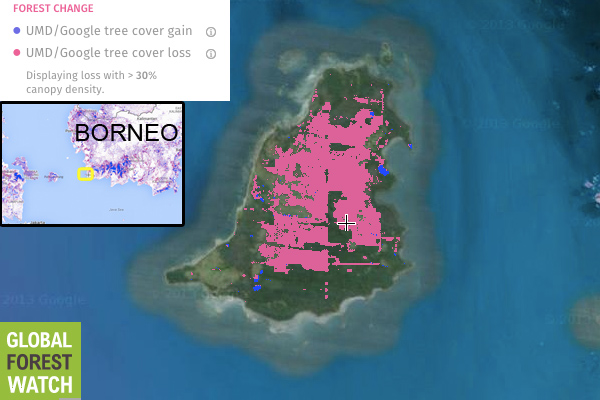 A small island off Kendawangan in West Kalimantan’s Ketapang Regency has lost a substantial amount of its tree cover over the past decade, according to Global Forest Watch.

Intense exploitation of Indonesia’s natural resources is taking a special toll on the country’s small islands, with many subject to an outpouring of mining concessions that cover huge swaths of their tiny areas, often to the chagrin of local populations.

The issue was highlighted at an event in Jakarta last week titled “Talk Show: The crisis facing small islands and indigenous communities.” Participants came from as far as Mentawai, a chain of about 70 islands off the coast of West Sumatra, and Aru, a cluster of around 90 islands in Maluku. While rich in culture and biodiversity, both have become targets for expansion of land-based investments.

Aru caught the national spotlight when Malaysia-based Menara Group acquired rights to three quarters of its 629,000 hectares as part of a massive plantation venture. Following a public outcry fueled by the “Save Aru” Twitter campaign, then-Forestry Minister Zulkifli Hasan announced in April 2014 that he would not sign off on the company’s plans.

“Although the permits have been revoked, we are still anxious because last September a license was issued for a 55,000-hectare logging concession,” said Mika Ganobal, a civil servant from Aru who was active in the online struggle against Menara Group. 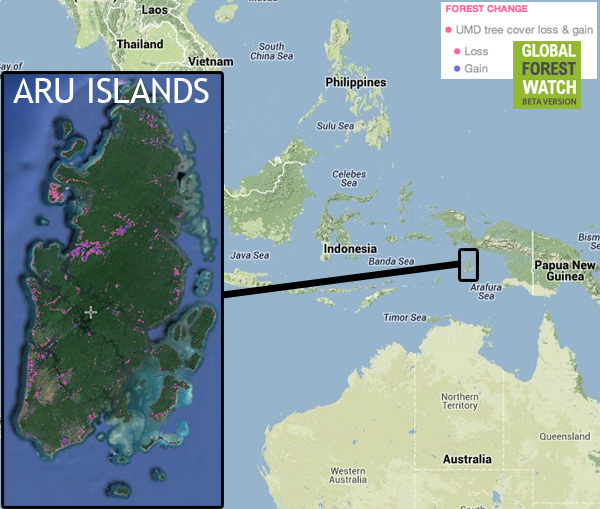 According to Forest Watch Indonesia (FWI), which hosted the event along with the Indigenous Peoples’ Alliance of the Archipelago (AMAN) and Save Aru, as of 2013 nearly 673,000 hectares or 18 percent of the total area of Indonesia’s small islands were covered by permits for land-based exploitation. These included two logging concessions, two pulp and paper licenses, four plantation permits and 227 mining concessions.

The licenses were present over 230 small islands, which the Law on Coastal Management and Small Islands (P3K) defines as no larger than 2,000 square kilometers and recognizes for their rich yet delicate ecosystems. AMAN estimates they are home to 10 million Indonesians.

FWI campaigner Mufti Barri said the rise of land exploitation on small islands was threatening to literally sink many of them, as the loss of natural forests was eroding ecosystem services they once provided.

In a 2011 report, the Maritime Affairs and Fisheries Ministry said 28 of Indonesia’s small islands had already sunk beneath the waves and 24 more were in danger of disappearing. According to a Climate Change Vulnerability Index published by Maplecroft, a global risk consultancy, by 2050 the sea will have overtaken some 1,500 Indonesian islands.

“In the past, it was the Forestry Ministry that was the cause of destruction for small islands because of all the permits they issued,” Mufti said. “Only mangrove swamps were treated as protected areas.”

Mufti called on the new Environment and Forestry Ministry to evaluate its predecessor’s legacy by reviewing its permits and urged it to work together with the Maritime Affairs and Fisheries Ministry in acting as steward of Indonesia’s small islands.

Rido M. Batubara, director of small-island utilization at the Maritime Affairs and Fisheries Ministry, said he wouldn’t hesitate to withhold permissions even for companies that had already obtained a principal license, which lets a foreign company open a local office.

“Just because they have a principal license, doesn’t mean they can begin exploitation,” Rido said. “First they need a permit from my ministry.” 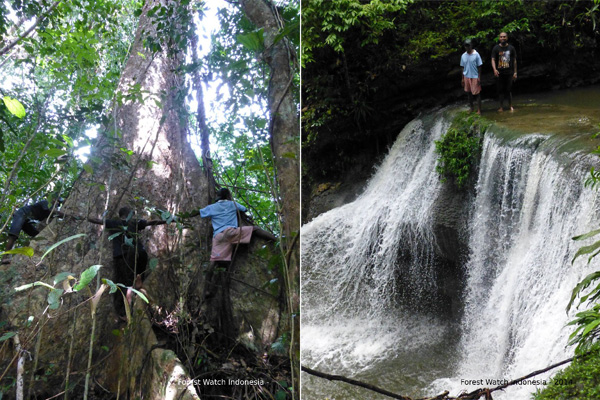 Representing Mentawai at the Jakarta event was Gugun from the Citra Mandiri Mentawai Foundation, which supports local communities there. Gugun said a government program to bring “progress” to indigenous peoples via the construction of new houses had cut off their access to the forest and ushered in crises of identity and ethnic confidence.

“Indigenous peoples here can no longer enter the forest to perform rituals,” Gugun explained. “The local religion has been weakened dramatically. The shaman’s role as a spiritual figure connecting humans and nature has been eliminated. The young generation has lost our identity. The education system teaches not about Mentawai but Minangkabau culture.”

The Minangkabau people are generally associated with mainland West Sumatra, the province under which Mentawai is governed.