Firewood fervor may turn Zimbabwe into an ‘outright desert’

A baobob tree in scrub woodland in Masvingo Province, Zimbabwe. Photo by Kjdhambuza.

Zimbabwe, home to more than 14 million people, is currently facing a severe economic crisis. Under President Robert Mugabe’s land distribution reforms, in the year 2000 all white-owned commercial farms were forcibly seized for redistribution to landless native Zimbabweans. In February this year, the BBC reported Mugabe had finally admitted his land reforms amounted to badly thought-out land policies. These reforms are thought to be the driving force behind Zimbabwe’s agriculture-based economy’s thunderous collapse.

Mugabe has previously blamed poor agricultural productivity on the weather and Western sanctions, as the BBC points out.

Once a potential bread basket for surrounding countries, Zimbabwe’s economic collapse led to severe shortages of food and fuel and an inflation rate estimated at 8.5 percent in 2013. To make matters worse, a majority of the population is without work. A 2009 estimate put the national unemployment rate in Zimbabwe at a whopping 95 percent.

In developing countries like Zimbabwe and in much of the rest of sub-Saharan Africa, fuelwood is a major source of energy for cooking and heating for people who can’t afford electricity. A 2014 study published in Resources and Environment highlights the severity of this issue in Zimbabwe. The study, which explores firewood consumption patterns, shines light on the severe shortage of electricity in Zimbabwe. It blames a weak infrastructure, erratic supply, maintenance issues and the unaffordable cost of electricity in the face of unemployment and low incomes for contributing to increased use of firewood, which, in turn, is driving deforestation in the country.

The study points out that the use of firewood in urban areas is a more imminent environmental concern than its use in rural areas. Rural households do not cut down whole trees and often collect dead wood which has a less intense environmental impact than urban firewood harvesting, which is concentrated on specific areas to reduce transport costs and involves cutting whole, live trees. The study says a high demand for firewood in Zimbabwe’s urban areas is causing deforestation and land degradation in other parts of the country – despite sustainability goals set forth in a United Nations Development Programme report pledging to curb deforestation by the end of 2015.

Another significant industry in Zimbabwe is tobacco, which has also been in the limelight recently for accelerating deforestation. According to an article published by the Inter Press Service (IPS), forests are being cleared and converted to tobacco fields in some remote areas.

“The rate at which deforestation is occurring here will convert Zimbabwe into an outright desert in just 35 years if pragmatic solutions are not proffered urgently and also if people keep razing down trees for firewood without regulation.” Marylin Smith, an independent conservationist based in Zimbabwe and a former staffer in the government of President Mugabe, told IPS. Smith blames the deforestation on the growing numbers of tobacco farmers who cut down trees to use to cure the cash crop. There are more than 88,000 tobacco farmers in Zimbabwe, according to the Tobacco Industry Marketing Board.

Tobacco leaves are dried, or cured, by circulating hot air around them for a week. In Zimbabwe, wood is the fuel of choice for curing tobacco.

“Curing tobacco using huge quantities of firewood and even increased domestic use of firewood in both rural and urban areas will leave Zimbabwe without forests…But really, it is difficult to object to firewood use when this is the only energy source most rural people have despite the environment being the worst casualty,” Thabilise Mlotshwa, an ecologist from an environmental lobby group called Save the Environment Association, told mongabay.com.

According to Global Forest Watch, Zimbabwe lost approximately 373,000 hectares of tree cover from 2001 through 2012, representing about 2 percent of the country’s total forest cover. Based on data from the Food and Agriculture Organization (FAO) five percent of Zimbabwe’s primary forests remained as of 2010. 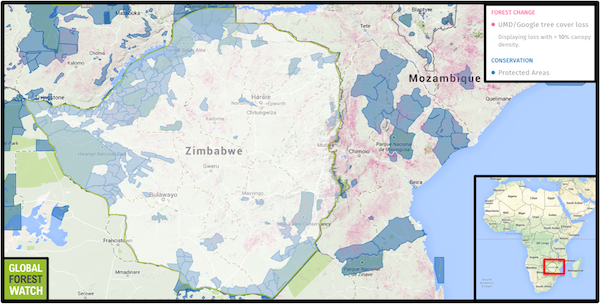 Zimbabwe is dominated by relatively sparse forest, with Global Forest Watch data showing only about 5 percent of the country’s forested area is comprised of thick tree cover with canopy coverage greater than 30 percent. Its protected areas (PAs) have not been immune from deforestation; Global Forest Watch Commodities shows that of the approximately 373,000 hectares of tree cover lost in Zimbabwe, more than 64,400 — 17 percent — occurred within PAs. In 2009 alone, more than 13,000 hectares of PA tree cover were lost. Click to enlarge.

Zimbabwe isn’t the only African country dependent on wood for fuel. An estimated 90 percent of the entire continent’s population uses fuelwood for cooking; in sub-Saharan Africa, firewood and brush supply nearly 52 percent of all energy sources.

“Like several other remote parts of Zimbabwe, we have no electricity here and for years we have been depending on firewood, which is the main source of energy for rural dwellers even for the past generations, and you can just imagine the amount of deforestation remote areas continue to suffer,” Irene Chikono, a 61-year-old teacher who lives in Mutoko, 143 kilometers east of the capital Harare, told IPS.

However, even those who have access to electricity are subject to erratic power supplies from the state-owned Zimbabwe Electricity Supply Authority (ZESA), which is failing to meet the demand for electricity owing to insufficient finances to import power. A single mother of three, Collina Hokonya lives in Harare’s high-density Mbare suburb. “With increasing electricity outages here, I often resort to buying firewood from vendors at local market stalls, who get this from farms neighboring the city,” she told IPS.

While the government claims it is doing all it can to fight deforestation, the indigenous timber merchants say that the faltering economy might make it hard for them to stop cutting down trees.

“We are into the timber business not by choice, but because of joblessness and we therefore want to make money in order to survive,” Mevion Javangwe, a merchant in Harare, told IPS.

According to an article in Newsday, 61 percent of the energy provided to Zimbabwe’s industry comes from fuelwood while electricity accounts for only 13 percent. Saviour Kasukuwere, the Zimbabwean Environment, Water and Climate minister estimates that over six million tons of firewood is consumed every year against a sustainable output of about 4.6 million tons.

Zimbabwe is also home to one of the world’s greatest wonders, Victoria Falls, as well as a host of wildlife including African elephants (Loxodonta africana), zebras (Equus zebra), lions (Panthera leo), impalas (Aepyceros melampus), the endangered African wild dog (Lycaon pictus), and the critically endangered black rhino (Diceros bicornis). Before the land reforms were implemented in 2000, Zimbabwe had 620 private game reserves with abundant and protected wildlife. Today, there are 14 of these reserves left. 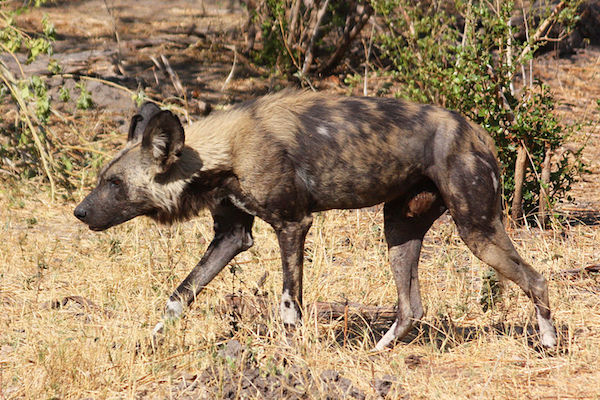 Zimbabwe’s forests and grasslands are home to African wild dogs (Lycaon pictus), which are listed by the IUCN as Endangered. Photo by Charles J. Sharp.

The effects of a crippling economy have extended to the country’s natural heritage as well. According to a 2007 article in National Geographic, the Zimbabwean government slaughtered 100 elephants so their meat could be served at the nation’s independence celebrations in 2006. The article also claims that Zimbabwe sold ivory to China in exchange for military hardware. Not only is poaching a major threat to the country’s wildlife, the financial incentives of wildlife trafficking can be all the more enticing at a time when jobs are few and incomes are low.

In a more recent article published by a Zimbabwean newspaper, a farmer pledged to donate two buffalo, two elephants, a trophy lion, two sables and five impalas, together worth $120,000, to the 21st February Movement, which is an event meant to mark President Mugabe’s 91st birthday. Members of the local community alleged the farmer Tendai Musasa’s donation was not transparent and accused him of imposing himself and clandestinely exploiting resources at their expense without submitting the money to the community as expected. Villagers were reported to have said that the animals involved were part of their annual hunting quota and donating them meant no income for the whole year. They also said they were powerless because challenging the donation could be misinterpreted as unwillingness to participate in the celebrations.

To put in perspective just how bad Zimbabwe’s economy is – one Zimbabwean dollar is currently equal to roughly 0.00276 U.S. dollars; that is, two-tenths of a cent. With such a deep trench to crawl out of, the future of the country’s natural resources looks bleak at best. As Chikono, the teacher from Mutoko, told IPS, “We will only manage to fight deforestation if government brings electricity to our doorsteps, because without electricity we will keep cutting down trees for firewood.”

With such a slippery slope to conquer, many in Zimbabwe are choosing to walk away. As of 2014, almost 21 people out of every 1,000 were migrating out of the country – increasingly to South Africa and Bostwana – in search of a better future.