To keep big cats out, use a cat door

As a hunter searches for prey, heat radiates off the sun stroked horizon distorting the landscape. At the snap of a twig and a rustle in thorny acacia the hunter is off. Keen eyed hearing pinpoint its prey: the cheetah spots an impala and immediately gives chase. The chase won’t last long though. The impala lives on a farm and is protected by a high fence to keep predators out. But these fences aren’t fool proof. A persistent cheetah can find a way in if it can find a warthog tunnel.

In a paper recently published in the Journal of African Ecology, Phd Candidate Niki Rust investigated how environmental factors affected swing gates on a game farm in the Otjozondjupa region of Namibia. Developed by the Cheetah Conservation Fund (CCF), these gates are intended to protect cheetahs (Acinonyx jubatus) by decreasing human-wildlife conflict. The swing gates are essentially large pet doors that help prevent indiscriminate killing of cheetahs by game farmers. When valued livestock is lost to predation, game farmers react by hunting down the likely culprit and shooting them dead. Taking the stance that the only good cat is a dead cat. 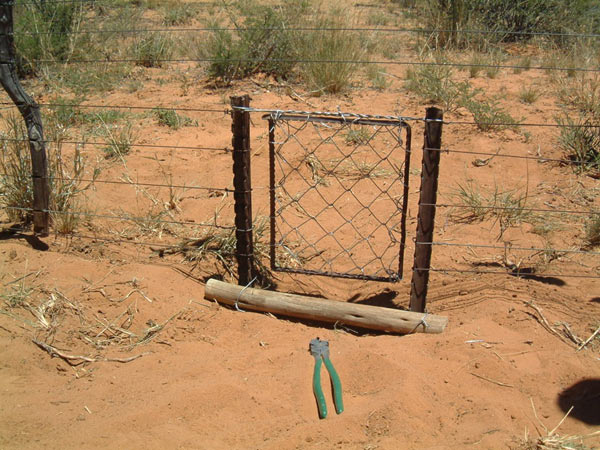 The finished construction of a swing gate. This is a similar design to a cat flap as it swings from the top bar. The wood at the bottom reinforces the swing gate and stops animals from digging a bigger hole underneath it. Photo credit: Cheetah Conservation Fund.

This is a relatively new obstacle in the face of cheetah conservation.

“Over the past twenty years game farms have become more abundant in southern Africa. And recently game farmers have killed more cheetahs than cattle ranchers,” said Laurie Marker founder of the CCF and co-author of the paper.

Game farms raise wildlife like zebra and sable for commercial purposes such as trophy hunting. But obviously they offer a tantalizing prospect for predators likes cheetahs. To combat this, game farms are usually bordered by tall fence. However, burrowing animals such as aardvarks (Orcyteropus) and warthogs (Phacochoerus africanus) sometimes dig underneath fence lines creating a path for predators to enter the farms and prey on the enclosed wildlife.

“It’s easy to forget or not realize, just how big warthogs are; they’re massive and create impressive tunnels large enough for big cats, cheetahs in particular, to crawl through and into game farms. And potentially consume a farmer’s livelihood, ” Rust told mongabay.com. “Swing gates let warthogs, porcupines and other burrowing animals move in and out of game farms without tunneling under fences.” 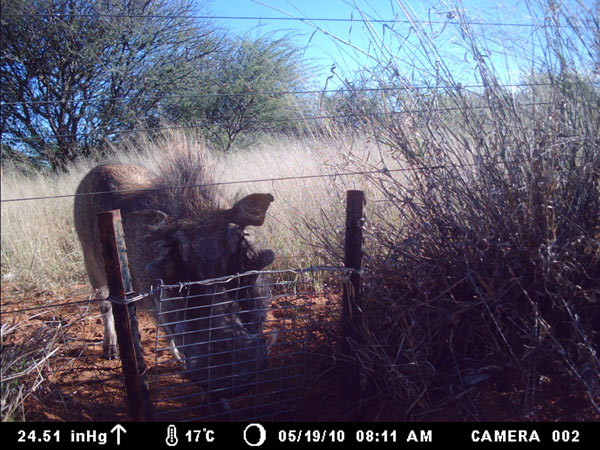 A warthog in the process of using a swing gate. Photo credit: Cheetah Conservation Fund.

However, incorporating a swing gate into a fence line does not insure warthog tunneling will end.

Although swing gates have been used since 2007, no previous study had looked if environmental factors influenced their success. Rust and her collaborators found that such factors were key as to whether or not warthogs burrowed or chose to use swing gates. For example, if the soil along a particular stretch of fence was soft, either from rain or because it was sandy to begin with, then warthogs would choose to dig rather than using a swing gate.

On the other hand, if the soil was hard due to absence of rain or if it was more clay-like or rocky, then warthogs utilized the gates instead of tunneling. Similarly, if vegetation was dense or grass was shorter along a fence line, then the number of holes dug to gain access increased.

“Ultimately, despite some digging underneath fences, the swing gates are effective and with the information collected from this study, swing gates can potentially be placed more effectively to promote their use. It seems warthogs prefer the path of least resistance and swing gates cater to this desire,” said Rust.

Although it seems counter intuitive to install an enlarged cat door to keep cheetah and other big cats out, Marker highlighted why the gates are successful. 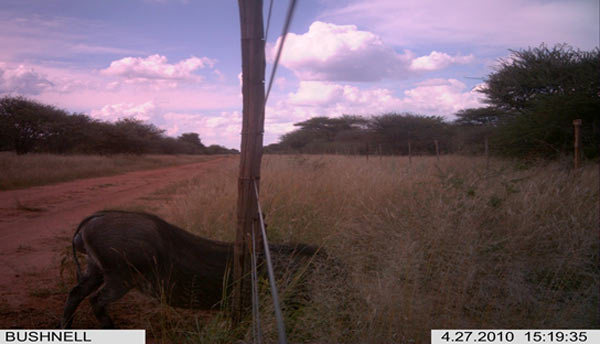 A warthog about to use a fully-functioning swing gate. Photo credit: Cheetah Conservation Fund.

“The cheetah don’t use the gates because they haven’t figured how to use them or because the gates are too small, they simply have terrible vision. Cheetah have excellent distance vision and hearing but are near sighted. So to a cheetah a fence line with a swing gate looks like a solid barrier.”

Reducing the amount of tunneling means less chance of escape for wildlife bred and raised in the game farm, alleviating potential pressure from predation. And with Rust and her collaborators research, swing gates can be placed more effectively, mitigating conflict between big game farmers and big cats.