Swimming against the stream: a rare crocodile captivates researchers

by Jordanna Dulaney on 2 February 2015

The Sunda gharial (Tomistoma schlegelii) looks like “just an odd crocodile” according to Robert Stuebing.

He would know. Stuebing and his team have recently published an article in the International Zoo Yearbook outlining habitat information and threats to the Sunda gharial at Lake Mesangat in Indonesian Borneo.

“The Sunda gharial is one of the largest crocodilians, with adults reaching 5 meters [16 feet],” explained Agata Staniewicz, a graduate student at the UK’s Bristol University and one of the study’s three authors. “The body is usually light brown to olive, with dark cross-bands and blotches on the sides. Its most distinguishing feature is the very narrow snout.”

It is the animal’s camouflage and habitat which are the major stumbling blocks for researchers: the Sunda gharial is hard to find. Although marked by the IUCN as Vulnerable, Stuebing says that it could also be labeled as simply Data Deficient.

“Prior to a few years ago, the species was so difficult to find, and thought to be in such remote or unpleasant habitats (tangled, bug-infested peat swamps) that researchers were not that keen to study it – especially if there was such difficulty in finding a population to study,” Stuebing explained. “Tomistoma [another name for the Sunda gharial] also seems to practice ‘cryptic’ behavior – spending much of its time lying quietly underwater, especially during daylight hours.”

The team focused on the Sunda gharial habitat of Mesangat Lake in the Mahakam River Basin in East Kalimantan, Indonesia. The lake, comprised of an elaborate network of channels and rivers covered in mats of floating plant life with few trees and many bugs, is one of the few places scientists know where to find the Sunda gharial.

“As far as we know,” Ralf Sommerlad, a study author and member of the IUCN – SSC Crocodile Specialist Group said, “the Mesangat area is the only place worldwide where Tomistoma [Sunda gharial] and the Critically Endangered Siamese Crocodile are living sympatric [overlapping] and in healthy populations. More scientific field research is needed to improve our limited knowledge especially of the secretive Tomistoma.” 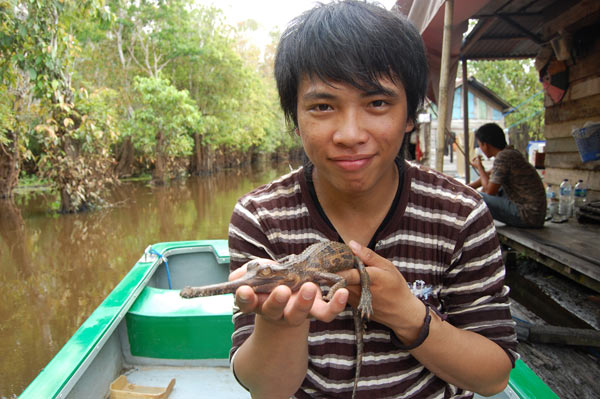 “I spent months at a time living on a raft, paddling around the area is small canoes at night and battling with nocturnal wasps that were attracted to our spotlight,” said Staniewicz. “However, all this was worth seeing some of the rarest crocodilians in the wild as well as other endangered species inhabiting Mesangat Lake area (proboscis monkeys, Storm’s storks, Bornean river turtles, to name a few).”

The team collected data over a two-year period, with Staniewicz spending six of those months on raft-houses to catch the crocs. The team monitored water levels, weather, and other Mesanagat species.

What is incredible about the Mesanagat area is its resilience. Since the late 1980s, the area has been home not just to rare crocodiles, but also to palm oil companies. Although the wetlands have witnessed incredible deforestation for the lucrative palm, the researchers were overjoyed to discover that the Sunda gharial and other animals, too, live on. 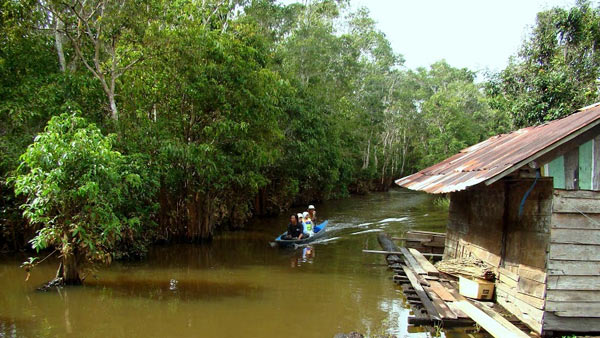 The raft research station where Staniewicz and other researchers collected data. Photo supplied by Robert Stuebing. 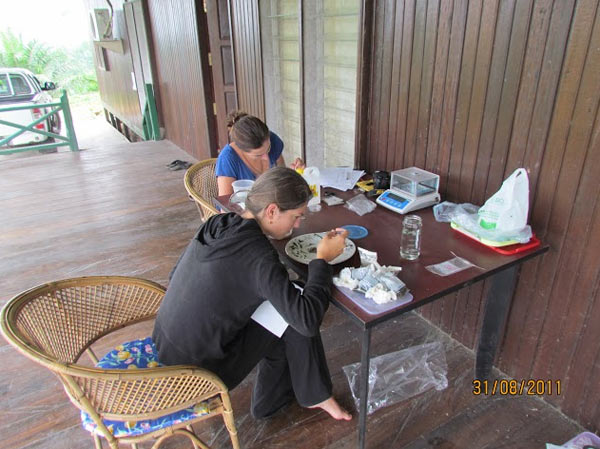 But conservation of the Mesanagat area raises one important question: is it worth preserving an already-degraded habitat?

“We will have to get away from the more or less standard view that conservation of Endangered species must always involve our looking for ‘pristine’ areas (such as Totally Protected Areas) where these might occur,” said Stuebing. “As in most places in the world, the landscape in much of Kalimantan has been modified from its original (forested) condition…Habitat alteration – forest loss – does bring dreadful consequences, but that does not mean that we should ignore the 90 percent or more of the landscape that lies outside protected areas merely on the assumption that no species of interest remains in them.”

The Sunda gharial, and the countless other Mesanagat species, may swim on yet. 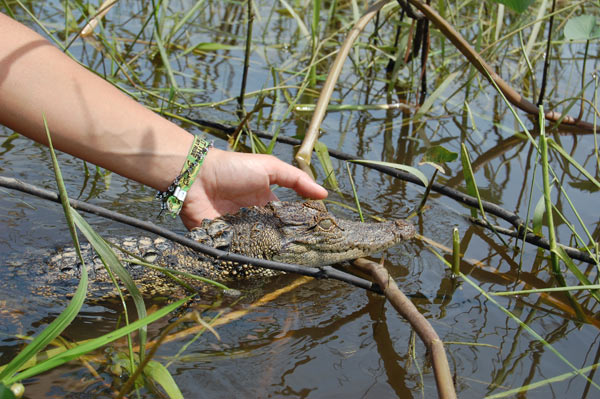