A banteng bull and two cows in one of Sabah’s protected forests on camera trap. Photo courtesy of Danau Girang Field Centre.

Malaysia’s Daily Express recently published graphic photos of poachers in the Malaysian state of Sabah posing proudly with a number of illegally slaughtered large animals, including the incredibly rare and cryptic banteng. Wild, forest cattle, banteng are scattered across parts of Southeast Asia, but Borneo is home to a distinct subspecies: Bos javanicus lowi. According to the Danau Girang Field Centre, only a few hundred survive on the island and, if poaching continues, the subspecies could soon be wiped out altogether.

“It is incredibly saddening to see the carcasses of the animals that we have struggled to research for the past few years, and to continue to witness the ease in which poachers are able to access supposedly protected forests,” said Penny Gardner, who has studied banteng for five years in the state with Cardiff University and Danau Girang Field Centre.

In addition to facing poachers, banteng—like all other rainforest animals in the region—have suffered widespread habitat loss. From 2000 to 2010, Sabah lost more than 15 percent of its forest cover, much of it to oil palm plantations and logging. According to Global Forest Change, Malaysia had the world’s highest deforestation rate—as opposed to total loss—when looking at the period from 2000-2012. During that time, Malaysia lost 14.4 percent of its forest, a rate nearly twice as high as Indonesia.

“Over the past 30-40 years, the banteng has suffered catastrophic events, which have caused their demise and resulted in the local extinction of some herds,” said Penny Gardner, who has studied banteng for five years in the state with Cardiff University and Danau Girang Field Centre. “Their story is similar to many other species in Sabah, such as the Sumatran rhino, orang-utan, sun bear and elephant with the exception of one detail; they are widely unacknowledged.” 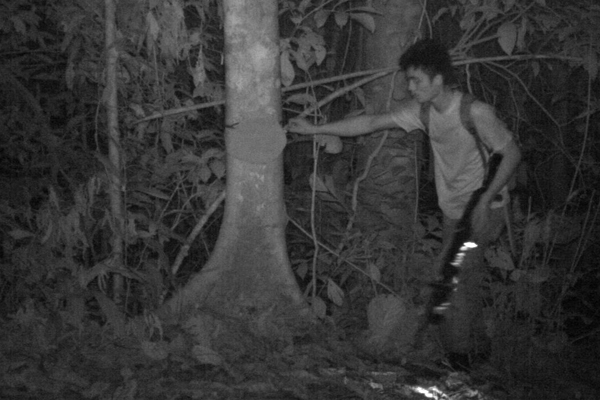 Indeed, Benoit Goossens, the Director of Danau Girang Field Centre, said that conservation groups knew of at least three banteng killed by poachers, but they had remained unpunished—and unpublicized—until the recent article in the Daily Express.

“We have been monitoring the banteng population in this area for over four years and they are exceptionally sensitive to human presence and vehicle noise. There is a small breeding population, and the survival of every individual and new calf is crucial,” said Goossens.

In the article highlighting the gruesome poachers’ photos, Forestry Director Sam Mannan said candidly that poaching in Sabah had hit “pandemic proportions.” Part of the problem, he said, was the ease with which poachers have access to forests.

“Sabah is the only State in the country that has lax laws, downright appeasing, on forest reserve entry—consciously laisse faize,”
Mannan told the Daily Express.

He said the poaching wasn’t for subsistence, but largely for trade abroad.

“Until and unless this band of hooligans…are arrested, charged in court, and sentenced severely, the killing field of iconic wildlife…will continue, expand and in the end leave us with a Dead Green Desert–lots of trees but no animals within,” Mannan said. 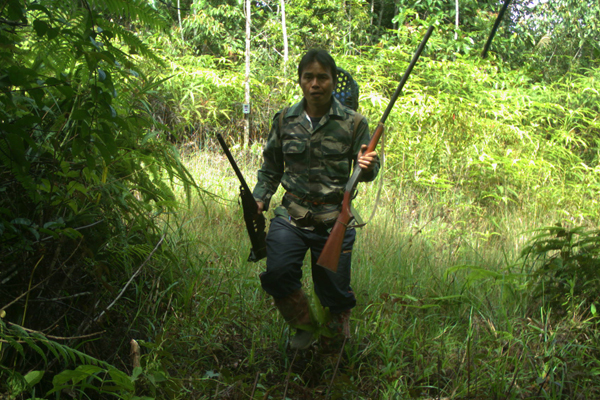 “We have evidence that the killing is going on and it is time for the public, the government and the NGOs to work together and put a stop to poaching of endangered species in our state,” said Goosens, who asked, “Will we need a banteng’s captive breeding program similar to the Sumatran rhino’s one in Tabin to save the [banteng]?”

Globally, banteng are categorized as Endangered by the IUCN Red List. In addition to Sabah, the wild cattle are found, albeit rarely, in parts of Indonesia, Cambodia, Laos, Myanmar, Thailand, and Vietnam. The IUCN estimates global population at just 5,000-8,000 animals. Banteng aren’t the only threatened wild, jungle cattle in Asia. The kouprey (Bos sauveli) is even more endangered and may already be extinct. If it is gone, it was likely hunted to extinction.