This article is the first in a two-part series about logging in Malaysia. Read the second part here.

A recent report by the international affairs think tank Chatham House has highlighted Malaysia’s lack of progress in dealing with illegal logging, blaming corruption and a lack of transparency on the country’s sluggish approach to environmental policy reform.

“Widespread problems remain, particularly in the state of Sarawak,” the report said, adding that timber, as well as pulp, palm oil and rubber plantation expansion were the main drivers of forest loss in Malaysia.

Chatham House, which has been engaged in researching illegal logging and the responses of governments and private sector actors since 2006, assessed Malaysia’s forestry sector from 2008-2009, and then again between 2013 and 2014. It found not much progress has been made since its last assessment in 2010, with a high prevalence of illegal logging still occurring in the country’s forestry sector. Malaysia’s remaining forests are home to many species, such as the endangered Bornean orangutan (Pongo pygmaeus). Photo by Rhett A. Butler.

The forestry sector is one of the main pillars of Malaysia’s economy, an unsurprising fact given that trees cover around 90 percent of the country, according to Global Forest Watch. According to 2011 data from the Food and Agriculture Organization of the United Nations (FAO), Malaysia’s forest sector contributed $5.7 billion to its economy — or about 2 percent of its entire gross domestic product (GDP) — and employs roughly 210,000 people.

But money flowing into the country’s forestry sector has inevitably led to vast amounts of forest being felled. According to Global Forest Watch (GFW), Malaysia lost 548,000 hectares of tree cover in 2012. Sarawak alone lost more than 235,000 hectares the same year, while tree cover loss tripled from 2011 to 2012 in the state. However, it should be noted that tree cover loss does not represent outright deforestation, as tree plantation harvesting is also lumped into the data. 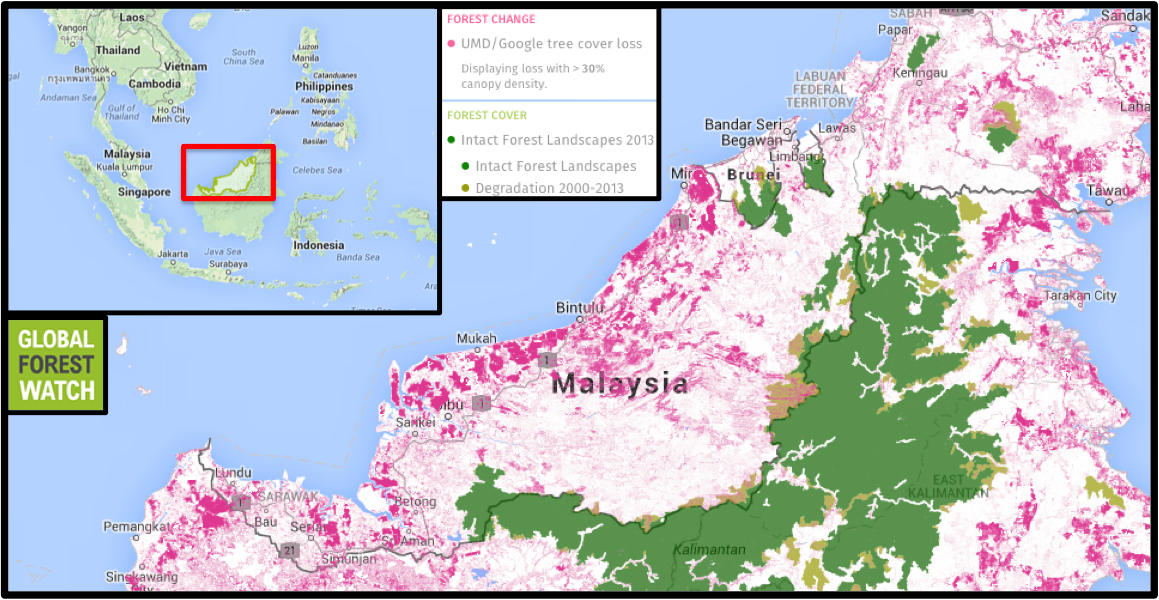 In addition to tree cover loss – which indicates both deforestation and plantation activity – Sarawak’s intact forest landscapes have been whittled away to mere nubs along its border with Kalimantan. Intact forest landscapes (IFLs) are undisturbed areas large enough to support their original levels of biodiversity. According to Global Forest Watch Commodities, Sarawak lost about 12,000 hectares of IFL tree cover in 2012, an amount more than twice that of any year since data collection began in 2001. Click to enlarge.

Sarawak’s situation is unquestionably the country’s most alarming: according to the Chatham House report, “nearly all” of the timber in Sarawak is derived from natural forests, and the state’s production accounted for 60 percent of Malaysia’s forest production in 2012.

The think tank noted that Asia — particularly Japan, where it says the lion’s share of Malaysian plywood is sent — is Malaysia’s most important export market.

“Japan imports more plywood from tropical forests than any other country, which feeds its huge construction and housing industries,” the NGO wrote. “Half of this comes from the rainforests of the Malaysian state of Sarawak, on the island of Borneo.”

Global Witness asserts that Japan imports approximately 100 million sheets of plywood per year from Sarawak. Their report includes concerns about possible increased impacts on Sarawak’s forests as construction gears up ahead of Japan’s 2020 hosting of the Olympics.

“Japan has committed to making the Tokyo games a model of sustainability, but the current practices of its construction industry raise questions about its ability to deliver,” Global Witness added.

A tale of two Malaysias

In Malaysia, forestry responsibilities are divided among the central government and the country’s 13 states and three federal territories.

States have the right to make their own policies on land and forest use, but Peninsular Malaysia and Malaysian Borneo are treated differently under the federal constitution: the mainland’s regulations must be in-line with those of the central government’s National Land Council (NLC), while Sabah’s and Sarawak’s do not.

“There is no parliamentary committee with formal oversight over the federal government’s forest agencies,” the report said. “Malaysia does not have an independent forest monitoring system in place — that is, an organization with a formal government mandate to perform such a role.”

As such, Malaysian Borneo on the whole records more illegal timber seizures as compared to the mainland, according to Chatham House. For example, their report states that in 2009, Sarawak and Sabah recorded more than 35,000 and 10,000 timber seizures respectively, while mainland Malaysia recorded fewer than 5,000.

Editor’s note: the article previously stated Japan’s preparation for the 2020 Olympics is already contributing to deforestation in Sarawak. However, we’ve since learned that’s not the case and have made corrections.