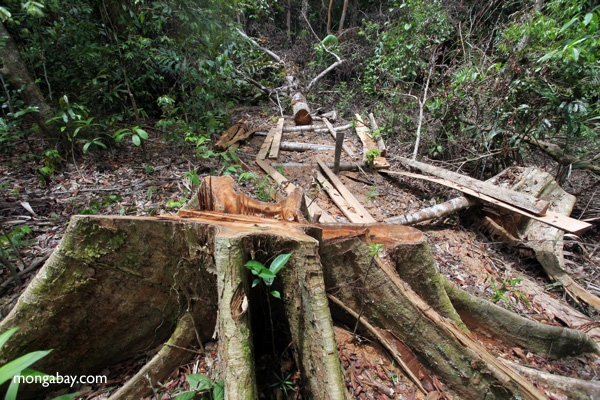 The report, released by Washington, DC-based NGO Forest Trends and The Anti Forest-Mafia Coalition, an umbrella group for Indonesian civil society actors, compares data from Indonesia’s Ministry of Forestry (which has since been merged with the Ministry of Environment) and the country’s thriving timber industry. It claims that raw materials processed by Indonesia’s pulp and paper mills surpassed the legal wood supply by 20 million cubic meters — enough to fill 1.5 million logging trucks.

“[Illegal timber likely] stems from the unreported clear-cutting of natural forests and other illegal sources instead of legal tree plantations and well-managed logging concessions,” Forest Trends said in a press release about the report, adding that Indonesia’s forestry plantations are currently both unsustainable and underperforming. 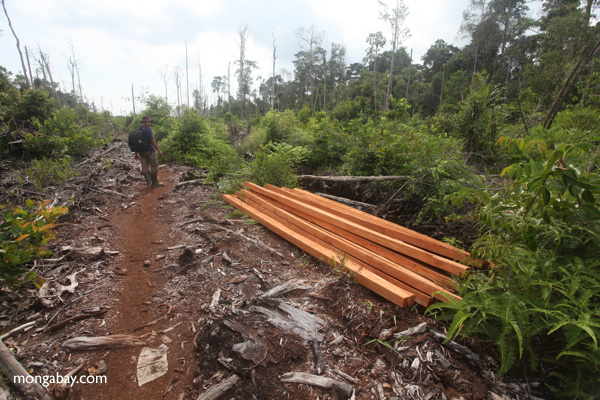 Although the main source of Indonesia’s illicit wood is not definitively known, data published by the Ministry of Forestry points to a likely culprit: “conversion timber.” In 2013, the ministry reported that 53 percent of the timber obtained from natural forests was derived from “conversion timber” felled to make way for oil palm and pulp plantations. That’s 4,000 percent more than the figure the ministry forecast in 2007.

Greenpeace also weighed in via a statement. While the organization acknowledged it hasn’t yet gone over the report in detail, it recognizes the “major gap between legal timber production and consumption by the timber and pulp sectors,” and blames the lack of transparency in the timber industry.

“One of the problems facing assessments of supply and demand balances in Indonesia is the secrecy around company-specific supply data,” Greenpeace said in its statement.

The report also alleges that if Indonesia’s current mills were to operate at full capacity, and firms followed through with future construction plans, the industry would have to double its legal wood supply to meet demand. Otherwise, the legal supply gap could reach 59 percent.

Forestry corporations operating in Indonesia are also attempting to fulfill plans to
increase their production capacities. Asia Pulp & Paper (APP), one of the world’s largest pulp and paper companies, for example, has made known its intention to construct new pulp mills in Sumatra. A $2.6-billion pulp mill in
South Sumatra — Indonesia’s biggest — is slated for completion in 2016. It’s
expected to churn out two million metric tons of pulp and 500,000 metric tons of tissue annually. 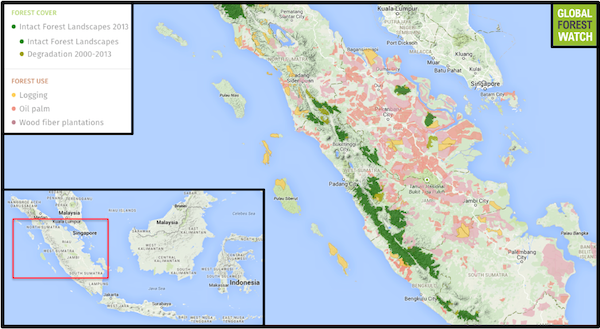 The central region of Sumatra is rife with concessions, particularly Riau. Data from Global Forest Watch Commodities show around 216,000 hectares of primary forest and 183,950 hectares of peatland forest were lost in Riau in 2012 alone, while logging concessions take up a relatively small portion of the province. Map courtesy of Global Forest Watch. Click to enlarge.

Despite a pledge by APP to halt deforestation of high-carbon stocks (HCS) and high conservation value (HCV) forests and peatlands, the report maintains that Indonesia’s processing capacity already exceeds the legal wood supply as it is, and thus such goals could not possibly apply to the industry as a whole. In fact, the Ministry of Forestry predicted in 2007 that the country’s plantations would be producing at almost twice the rate reportedly achieved today.

“If all companies implemented environmental commitments, such as ‘zero deforestation’ pledges, it would be impossible to meet current demand for timber,” Jenkins said. “Instead of allowing for new mills to be built, it would be advisable for Indonesia to hold future expansion of the pulp and paper industry until they successfully increase the number of tree plantations.”

However, APP maintains not all its wood fiber comes from Indonesian forests.

“In line with common global practice, APP’s fiber needs are not met solely by domestic wood supply,” Aida Greenbury, Managing Director of Sustainability at APP, told mongabay.com. “Fiber used comes from companies’ own concessions (if any), additional domestic suppliers, wood chips and pulp from the global market, as well as recycled content from domestic and global markets.”

Greenomics-Indonesia also questions the report’s assertions, saying its analysis was not thorough enough to substantiate its claims.

“The report still needs a much deeper assessment to conclude that more than 30% of Indonesian timber consumed by Indonesian forestry industry was illegal,” Elfian Effendi, Executive Director of Greenomics-Indonesia, told mongabay.com. “A supply-chain level analysis is really required to figure out how a certain forestry industry like pulp and paper sector sourced natural and plantation fiber for their operations. The supply-chain analysis also requires a strong spatial assessment to be carried out at a concession or supplier level.

“Unfortunately, the report has not yet come up with that kind of level. In my view, it is reasonable to say that the conclusion of the report is still premature.”

In addition to the ecological implications, the report asserts Indonesia’s rampant illegal logging has dire financial consequences. With such a large portion of the country’s industrial timber supply obtained illegally, it claims the government is losing out on billions of potential tax revenues. It also implies that the country can’t ensure that its Timber Legality Assurance System (SVLK) is not putting illicit timber on the market, a potentially painful blow to a recent Voluntary Partnership Agreement (VPA) Indonesia entered with the European Union.

The report states that Indonesia’s forestry exports are reportedly worth more than $10 billion a year as of 2013.

“Ultimately, Indonesia’s forest sector cannot remain viable and attractive to investment if it cannot operate within the law — a risk foreign investors are already starting to realize,” Jenkins said. “Due diligence will be crucial to ensure that the VPA does not provide a veneer of legality on new shipments of what is otherwise illegal wood.”