How do parks affect the poor? Jury’s still out, some experts say

Innovating Brazil nuts: a business with roots in the rainforest

In Peru’s vast northeastern region, where roads are scarce and forests abundant, crackdowns on the illegal plundering of timber, fish, and wildlife are sporadic and expensive. To fill the gap, the Peruvian National Park Service and non-profit conservation organizations encourage community groups to patrol their lakes and forests and control fishing and hunting.

In the Pacaya-Samiria National Reserve, this community enforcement system is credited with bringing the Amazonian turtle known as the taricaya (Podocnemis unifilis) and the huge fish called the paiche (Arapaima gigas) back from the brink while boosting local community members’ incomes and creating a multimillion-dollar business.

But across the Marañón River, in the park’s buffer zone, it is not difficult to find people who have dropped out of similar groups, saying they saw no benefit.

Throughout the Amazon, for some people, living near a protected area is a boon. For others, it’s a barrier to traditional hunting and fishing grounds.

How can two views of the same place be so different?

Mother Nature, answers biologist Joel Rojas, a fisheries inspector for the Loreto regional government. There are more fish in the Pacaya watershed, where management groups have been more successful, but fewer on the Samiria River side, where groups say the cost of patrolling the lakes outweighs the benefits.

“But they don’t have a view of the contrary situation,” he says. “If there were no restrictions, the resources would have been pillaged, and it would be worse.”

That opposite view, which researchers call a counterfactual, is harder to measure, and is missing from most assessments of the economic impact of parks on the surrounding communities, says Paul Ferraro, an economics professor at Georgia State University.

But it’s important, he stresses, not just to understand whether a protected area has an impact on poverty rates in surrounding communities, but the reasons for those effects.

Opponents of protected areas often argue that they take agricultural land out of circulation and put forest resources off limits, leaving surrounding communities worse off than before. But proponents say the benefits—more forest cover, environmental services, tourism, infrastructure—actually alleviate poverty, in addition to preserving nature.

Ferraro began looking more closely at the issue more than a decade ago, while working on projects meant to promote conservation through payments for environmental services—such as water, erosion control, biodiversity protection or other benefits—provided by a particular area. 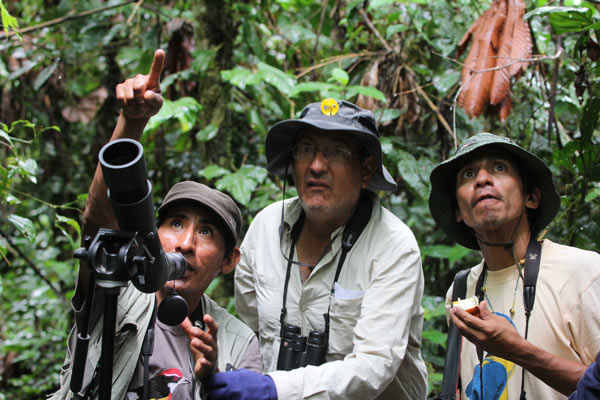 He found a dearth of data.

“I realized that for almost all conservation initiatives, we have very poor evidence,” he says.

Some studies show that the greater the biodiversity in an area, the higher the surrounding poverty rates. Others show that people lose access to resources when protected areas are created and regulations are imposed.

But the question, Ferraro says, is how much of that poverty can be traced to the creation of the protected area and how much to other factors, such as having poor soil, lack of roads or other infrastructure, or distance from cities. Answering these questions is essential for understanding which conservation measures reduce deforestation while also alleviating poverty, which do not, and why, he says.

Ferraro, along with some of his students and a handful of other researchers, are beginning to tackle the question, and data are trickling in. They are finding that impacts vary depending on factors such as how strictly protected the park is, accessibility and distance from cities, and the distance between the community and the protected area.

Their findings are beginning to punch holes in conventional wisdom about the benefits of parks. 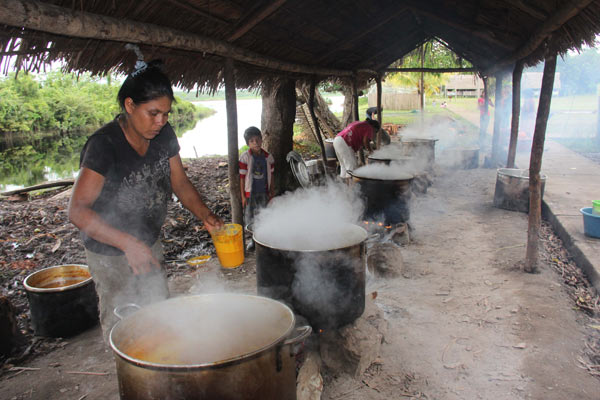 Women boil down fruit from the palm known as aguaje (Mauritia flexuosa) for oil in San José de Parinari, a community inside Peru’s Pacaya-Samiria National Reserve. The oil is sold for use in cosmetics. Photo credit: Barbara Fraser.

One common belief is that more strictly protected areas are best for the environment, because human activities are sharply limited, while multiple-use areas are more likely to be degraded, Ferraro says.

But one of Ferraro’s studies —of Bolivia, Costa Rica, Thailand, and Indonesia—found that more strictly protected parks do not necessarily reduce deforestation more than protected areas where people are allowed to use resources.

In Peru, a study of protected areas established before 2000 found that the oldest parks and those that allowed mixed use by locals were actually the best at reducing deforestation.

Still, effects vary from country to country. In Costa Rica, two-thirds of the poverty-reducing effect of protected areas was due to tourism, but the impact depended on proximity to cities. Moreover the people who received the greatest financial benefit lived closest to the park entrance.

In Peru, protected areas had little impact on surrounding poverty levels , even though the country promotes tourism, especially around iconic parks such as the Tambopata National Reserve .

The impact of tourism may have been greater in Costa Rica because the Central American country’s parks are more accessible and receive more visitors, the authors note.

The number of tourists visiting Peru’s Tambopata National Reserve rose from about 15,000 in 2005 to nearly 40,000 in 2013. In contrast, Costa Rica’s Monteverde Reserve receives nearly twice that number.

But results vary within a country, too, depending on where protected areas are located. 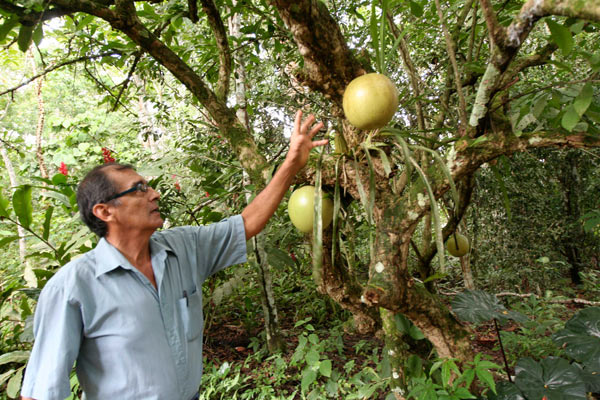 Víctor Zambrano reaches for fruit from a tree in the private conservation area that he established on his property in Peru’s southeastern Madre de Dios region. Tourism can help reduce poverty near protected areas, but experts say more research is needed to understand the trade-offs involved. Photo credit: Barbara Fraser.

The number of tourists visiting Peru’s Pacaya-Samiria Reserve—reachable only by a plane trip and a boat ride—rose from 1,000 to 10,000 between 2005 and 2013, but still remain well below Tambopata. Most visitors to both Pacaya-Samiria and Tambopata are foreigners, although the number of Peruvian visitors is on the rise.

The one indisputable lesson from the studies so far, Ferraro says, is that more studies are needed. Government parks agencies and conservation groups could help by designing programs as experiments that will yield data about economic impacts as well as conservation-related results, he adds.

Some people are skeptical about the econometric approach used by Ferraro and his colleagues.

Bruno Monteferri of the Peruvian Environmental Law Society bristles at the suggestion that Peru’s protected areas have little positive economic impact. Monteferri has spent much of the past decade nurturing a network of people who have voluntarily turned all or part of their property into private conservation areas.

The network, “Conservamos por Naturaleza,” or “We Conserve by Nature,” includes a range of people, from young biologists to grandmothers, who are often motivated by a love of place or a desire to leave something for their children and grandchildren, rather than by economic concerns, according to Monteferri.

Paige West agrees with Monteferri. The benefits of protected areas cannot be reduced to dollars and cents, says the anthropology professor at Barnard College and Columbia University.

“It’s not all about economic benefit,” notes West, whose research includes protected areas in Papua, New Guinea. “What you need is fine-grained analysis, not the broad swath analysis that you get with econometrics.”

Instead, West advocates ethnographic research, which involves detailed observation of people’s everyday lives, rather than the survey questionnaires that are more common in economic studies. More detail reveals that people have more complex ways of using and protecting resources, she says.

Some people understand that their traditional ways of using resources may not be sustainable, but opt to continue regardless. Others know that protected areas will limit their access to places where they used to hunt or fish, or to certain species they have hunted, but accept restrictions to conserve those places or species, she says.

Keeping people in the equation

With the advent of geographic information systems (GIS), communities have begun creating maps showing how they use their land and deciding which areas they will manage for hunting, fishing, timber or other uses and which they will keep off limits .

That kind of effort has a cascade effect, Environment Ministry biodiversity chief Alvarez says. Before the Tamshiyacu Tahuayo Communal Conservation Area was created in Loreto in 2009, wildlife had become so scarce that hunters had to travel to the watershed headwaters and then walk several days to find game.

“Now they have resources they didn’t have before. The area has become a place where animals and fish reproduce well and then disperse toward the edge [of the protected area],” he says. With fish and game more plentiful, family nutrition improves, ultimately improving wellbeing.

The conservation area “has become a sink and source,” he says, “which is the only way to ensure the sustainable use of wildlife in the Amazon region.” 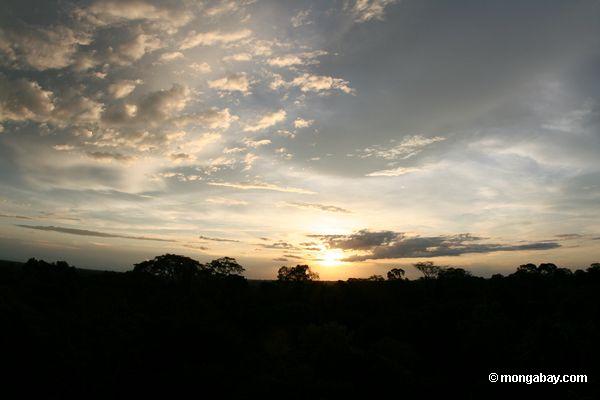 Sun setting over the Amazon rainforest in the Tambopata National Reserve. Photo by Rhett A. Butler / mongabay.com

If an understanding of how people use the land is important for mapping, it is doubly important when conservation clashes with communities.

Many of the early parks in Latin America, particularly in the Amazon, were patterned on the U.S. concept of wilderness preservation, focusing on conserving ecosystems and wildlife while ignoring or sidelining the people living there.

The publication of “ A Challenge to Conservationists ,” in 2004, caused park planners to begin paying more attention to local communities, West says. The essay was a scathing critique of international conservation organizations by anthropologist Mac Chapin.

“I think there is more of an understanding in the professional conservation community about the need to work with indigenous people and other people who depend on these areas for their livelihood, to figure out how they use the areas, why the areas matter to them, and work to build stronger projects,” she says.

“There still are people, although fewer, who think of protected areas as islands of conservation in a sea of depredation,” he says. “But increasingly the idea is taking hold that they are areas that are managed in a special way, not just for the future but for today’s generations.”

Still, the variety of views regarding the costs and benefits of protected areas to nearby communities points to the need for further research and more data on how conservation can improve people’s livelihoods, researchers say.

One way of gaining community support is to include local people in the planning of protected areas, says Peruvian anthropologist Alberto Chirif. Another is to ensure that efforts at conservation are accompanied by other government services.

“You can’t think of conservation just in terms of the environment—you have to think about it in terms of people. What do you do to make it possible for people, who usually are motivated to leave the place and move to the city because they don’t have (public) services, to stay there and find well-being?” Chirif asks. “Conservation also means think about improving health care and education. It can’t just pay attention to natural resources and the environment. That’s a short-sighted view.”